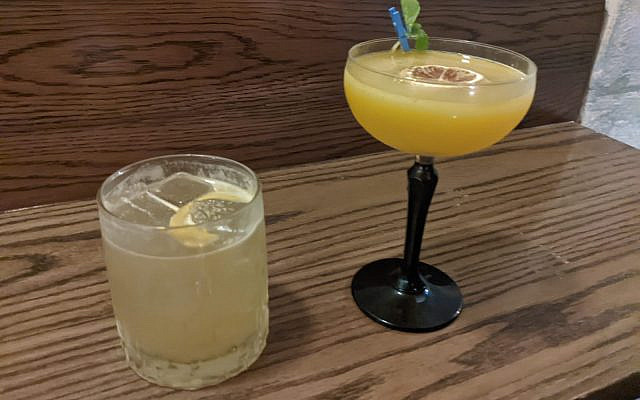 A night out in Jerusalem. (courtesy)

Between COVID-19 and other things in my life, I’ve barely been beyond a 20-minute radius of my apartment in the past six months. I confess, I was beginning to wonder why I live in the city, with all of its challenges, when I barely get any benefit from the attractions it has to offer.

But using our anniversary as an excuse, and seeing that the peak of this COVID wave seems to be passing, my husband and I decided to venture out for a night on the town — while still trying to stick primarily to outdoor dining. I felt like the evening encompassed much of what I love about Jerusalem — Jews gathering from so many different places, interesting artwork, and many culinary options that I could enjoy as someone who keeps kosher.

To start off, we went to an Ethiopian restaurant, Gursha, on Yaffo Street. I’d never had Ethiopian food before and was really excited to try Jerusalem’s only Ethiopian restaurant that had a kashrut certificate.  The injera with all the different sauces was delicious; each had its own flavor and texture. On the walls, you can see messages written by people from around the world who have eaten there. I was happy to see lots of messages from Brazil. 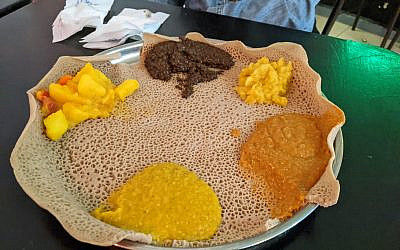 We took a break from eating in order to take in the free outdoor exhibit at Safra Square. The Square always has different exhibits that are changed regularly and is generally worth a stroll if you’re in the area. Today’s exhibit was different artistic takes on the “39 Melachot” — the categories of labor that it is forbidden to do on Shabbat. The paintings ranged from whimsical to beautiful to haunting. As a religious Jew, I appreciate seeing different contemporary creative interpretations of these ancient laws. 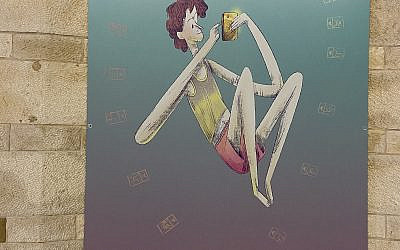 Then, we went to Tacos Louis, for authentic Mexican tacos. I got a Carne Asada — the meat was beautifully done and the guacamole was excellent. I love the feel of that moment when you hold the taco in your mouth and bite into it. Tacos Louis is under Tzohar kashrut — which is really important to me, as someone who opposes the Rabbinate’s kashrut monopoly. That monopoly is currently being challenged by the government’s kashrut reforms, which make room for local rabbinates and independent kashrut organizations. But the best way to create change is to vote with your mouth. I made sure to tell the people behind the counter that I was very happy to eat at a Tzohar certified establishment, and they were clearly grateful to receive positive feedback. 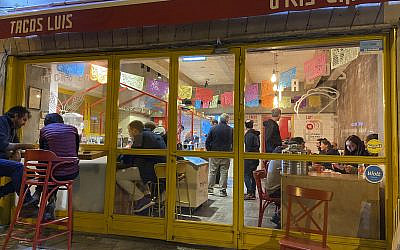 Keeping on the Tzohar track, we decided to follow up with a sushi bowl from Sushi Place. Everything combined well, tasted extremely good and was very fresh, from the rice to the raw salmon and the crispy fried fish, to the sliced beets. I told Tom and Shon, who were working behind the counter, that it was our anniversary, the food was wonderful, and we had chosen them because they had Tzohar kashrut. They were very excited and gave us free anniversary shots of sake on the house. 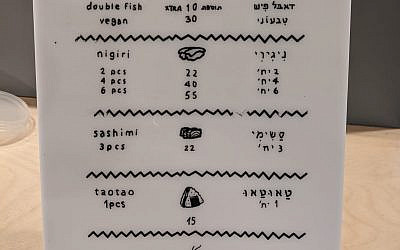 After that, we went to visit my cousin-in-law, Elad, who works at Andalucia, in Kikar Hamusika. We warmed up with some cocktails — mine was called Osuna and had chili-infused tequila, which I felt paired nicely with the tacos we had eaten earlier. But the highlight was the creme brulee: The contrast between the delicious caramelized crust and the soft creamy custard was amazing. 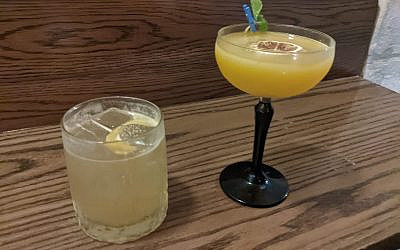 Clearly we weren’t driving, and were still a bit too COVID-averse to take a bus at 11 p.m. on a Thursday night, so we took a cab. During the cab ride, I noticed a tiny book with Arabic writing hanging from the dashboard, so I asked the driver about it. He told me it was a Qur’an, and that even though it was too small to read from, he put it there to protect him. I told him it reminded me of the mezuzah, which has writing from the Torah, and you put it on the doorpost to protect you.  We spoke a bit about that, and then wished each other well when the ride was over.

The ride home reminded me about one of my favorite parts about Jerusalem: That it’s home not just to Jews, but also to Muslims, Christians, and so many different communities. It is the people of the city who make it so special, and I feel blessed to call this city my home.