The Blogs
Daniel Goldman
Apply for a Blog
Please note that the posts on The Blogs are contributed by third parties. The opinions, facts and any media content in them are presented solely by the authors, and neither The Times of Israel nor its partners assume any responsibility for them. Please contact us in case of abuse. In case of abuse,
Report this post. 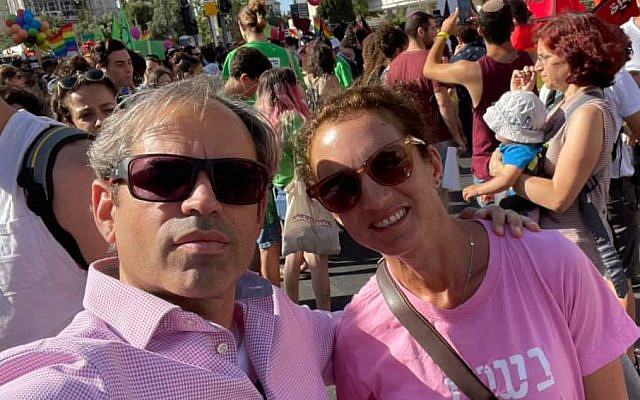 I have an old friend that I met through my work at Gesher. I can’t really remember how it came up in conversation, but we once started to talk about the Haredi LGBT community (an uncomfortable pairing of words for sure). My friend confided to me that he has a gay brother, who is still Haredi and very much in the closet. Only my friend and another sibling knew about his hidden sexual orientation. My friend was in constant stress worrying about the potentially suicidal state of his gay brother.

Since 2016 and the launching of a strident public campaign by certain Haredi Leumi (Harda”l) Rabbis against the LGBT community I began to look more carefully at my own attitudes towards gay people, and especially gay men. Were my attitudes underpinned by my religious or moral principles, or rather by prejudices unconnected with any religious idea? I reached a number of conclusions, which perhaps with fashionable tardiness, brought me to the Pride and Tolerance March in Jerusalem a number of weeks ago.

There is certainly a public image of the gay community that it has a powerful lobby, and that its members enjoy more than full rights and standing in society. And whilst this may be the case in certain parts of society, even to the point where the hyper-progressive lobby is perceived as a threat to conservative ideas, there are large parts of the religious and socially more conservative communities where this could not be further from the truth. Within religious and Haredi communities, there are many gay people who cannot express this aspect of their identity. And perhaps more importantly they live in constant tension between their sexual and religious identity and desire to remain a part of the religious community. School-age children are especially vulnerable, whether within the formal education surroundings or in the home and community. They often do not have the cognitive or emotional tools to synthesize parts of their lives that are almost impossible to integrate. They are often the direct or indirect targets of disparaging comments about being gay.

No God-fearing person can permit that which the Torah forbids, and so maintaining an authentic religious lifestyle alongside one’s LGBT sexual orientation can be a source of great mental tension. However, there can be no moral or religious justification for shaming or denigrating the gay community per se, hence our decision to join with the Gay Pride Parade in Jerusalem, to identify exactly with those whom certain rabbis have attempted to humiliate.

There is testimony that religious gay people fantasize about not being gay. As one might imagine, it is not the most comfortable place to be within the community, whether in or out of the closet. It is understandable that religious gay people would rather the opportunity to lead a regular family life, mother and father plus kids. Overwhelmingly, research points to the conclusion that sexual orientation is, in the main, not chosen, but a given as part of one’s human nature, and is not dependent on one’s willpower or desire to switch their sexuality. Hence gay people who seek a religious life and attachment to a religious community are more or less condemned to a sense of inner and persistent tension. This at least up to the point of coming out of the closet and being able to seek support from family, friends, community or rabbi (assuming the rabbi is capable of giving such support without pushing for conversion therapy or heaven forbid a heterosexual marriage).

Parts of the religious community are gradually changing attitudes towards their gay members. This is more about a social than a religious change, as the vast majority of the Orthodox mainstream is not positioned to allow that which the Torah still forbids. This is about seeing the divine image in every person and not tackling the complex theological issues head-on.

An outstanding and courageous example of this change is the groundbreaking document authored by the British chief rabbi, Efraim Mirvis along with Keshet, a UK organisation for gay members of the Orthodox community. They published a set of guidelines for Jewish religious schools on the best practice for safeguarding LGBT students and making sure their potential for emotional vulnerability not be exposed by clumsy language or practice in religious schools. Again, Rabbi Mirvis makes clear at the outset of the document that this is about the welfare of students and not about changing the Halacha.

It is exactly this type of change within the Orthodox community, even if it cautious and measured, which has ignited the reaction of the Harda”l leadership as it campaigns hard against any additional ground given up to the LGBT community at large. They see the religious community edging towards the liberal attitudes of the secular outside world (Jewish or otherwise) and it generates enormous anxiety about a crumbling wall of conservative and traditional values. It is the attempt to cope with the apparent paradox of religious life and an LGBT lifestyle that has galvanized rabbis like Zvi Tau, the President of the Har Hamor Yeshiva, or Eli Pre-Army Academy founder Rabbi Yigal Levenstein into outspoken and often ugly terminology regarding the gay community and its campaign for civil rights. From their perspective, the liberal infiltration into religious life undermines all that is holy for them.

Their campaign, leading to the founding of their own political party in Israel (Noam), whose central flag is combatting the winds of LGBT change, has actually focused religious people like myself to step out of their previous comfort zone and re-assess their position. From passive to active. From observer to supporter, at least in a limited way. Personally, it crystalised the insight that in spite of the religious dilemmas involved with gay sexuality and a religious lifestyle, we need to fight to create a place for everyone within our communities. Members of the religious community must not be pressured into potentially damaging conversion therapies, or heterosexual marriages, which often turn out as disasters for both sides of the partnership. And of course, nobody should be humiliated because of their sexual orientation.

This is the backdrop for Debralee’s and my decision this year to join the parade in Jerusalem, which is more understated and in many ways more modest than, say, the Tel Aviv parade, including more and more members of religious communities. We had a particularly moving moment when we saw an elderly religious couple, she with hair completely covered and he with a large kipa, she with a sign “I am a proud grandmother,” and he with a sign “I am a proud grandfather.”

I know that many of my religious friends will have great difficulty with what I have described and my choice to join the Jerusalem Gay Pride march, but it is important to stress that this is in no way meant to show any anti-religious defiance, either against the community or the Torah. The Torah’s ways are pleasant, and all its pathways are peace.

This is a translation of a column I published on the sister site of Times of Israel, Zman Israel.

About the Author
Daniel Goldman is a social entrepreneur and is immediate past Chairman of Gesher, the leading organisation bridging social gaps in Israeli society; he is also the Founding Partner of Goldrock Capital.
Related Topics
Related Posts
Comments
Advertisement