Abend, Lila? Jestem (I am present). 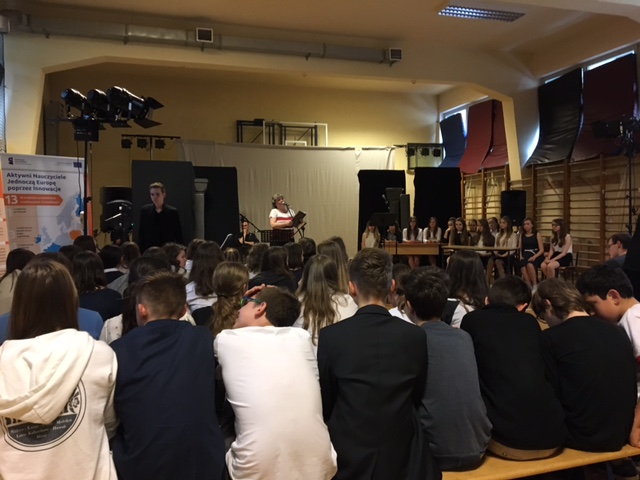 I am sitting in a school witnessing a roll call of 87 students. As the principal calls out the name of each one, another young woman responds — “jestem” — I am present, here and ready for school. But the young girls are not the same girls of these names, and the time span between the original roll call and the one I experience is 78 years.

The event took place in the Adam Mickiewicz Secondary School, named after one of Poland’s greatest Romantic poets. The principal, Ms. Gabriel Olszowska, came across an archive of school records from the late 1930s. In it, there was a list of active students for each year, their names, ages, place of birth, names of their parents and their attendance records. But mysteriously there was a whole section of information about 87 young girls missing. Only a red diagonal line denoting a disappearance of those girls. She got in touch with Yad Vashem’s Zvia Fried, who researched the archives and discovered that in 1939, three months after the Nazis had invaded Poland, 87 Jews were kicked out of the school. 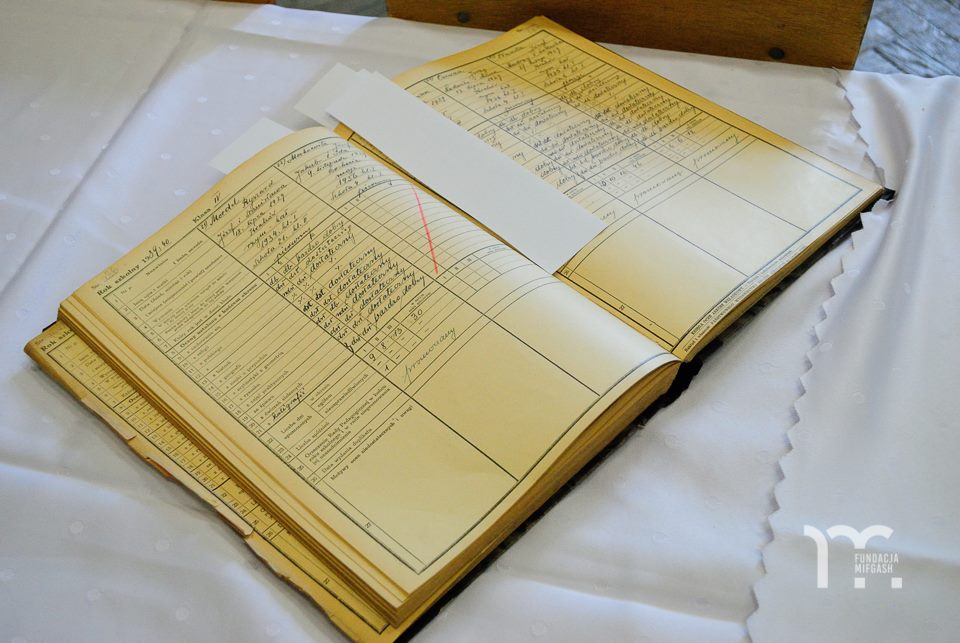 7-year-olds, 10-year-olds, Jews mainly from Krakow but also from Grodno, and Lublin, some sisters — all of them kicked out on one day and all that remains is a stark diagonal red line representing their disappearance.

Zvia Fried traced the 87 names and found out that 21 of the girls were tragically murdered, while another 24 are known to have survived; the remaining 42 are unaccounted for. This list of names represents the last definitive Polish whereabouts of some of the children whose lives was cut short so many years ago. Like so many other Polish Jews, their fate was sealed with the stroke of a pen — and their memories lost. 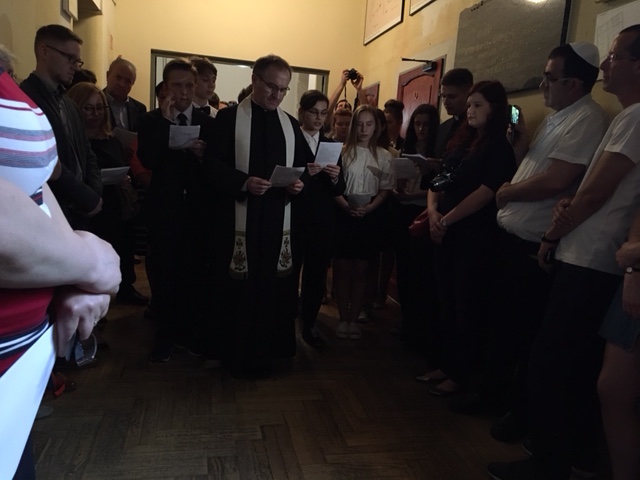 Through dedicating a day to these children, Principal Olszawska resurrected their memory, and she did not act alone. The entire school along with leaders of the Jewish community and priests, who volunteered during their free time, gave a voice to those who have been silenced. 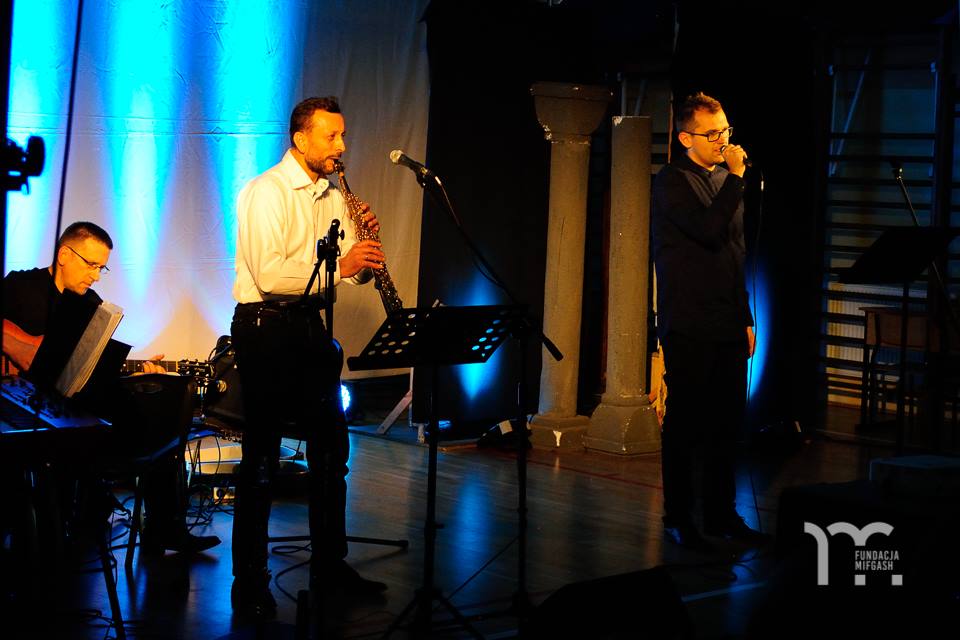 I was invited by my friend and student Irek Czubak, a Polish Christian who comes to my weekly classes on Judaism. A musician, he was asked to add musical entertainment to this event, and he chose some classic Jewish songs to share with the non-Jewish Polish youngsters. How many years have passed since Have Nagila has been sung in Adam Mickewicz School? 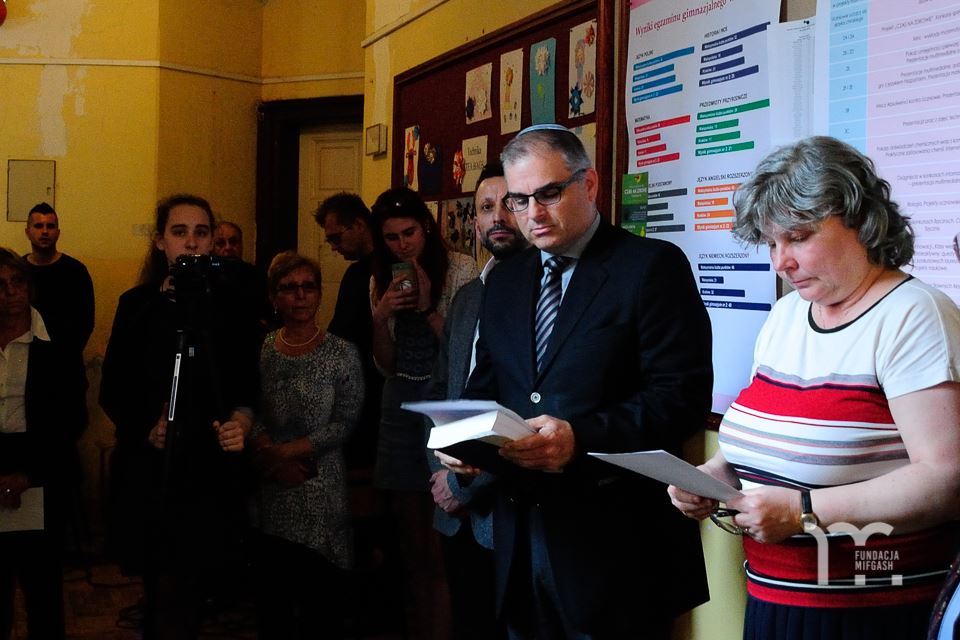 I spoke about the righteous act of certain individuals in Poland of the past and present to restore the memory of these young girls. Judaism honors the memories of our loved ones on the holiest day of the year, but without their names, like them, we are lost. The simple act of recalling a name is redemptive. 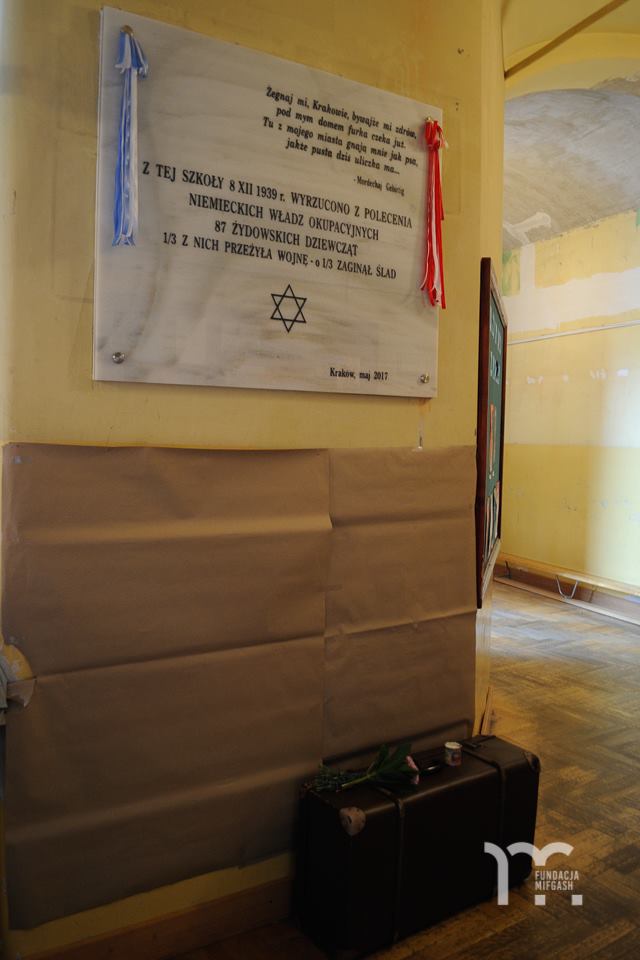 In the corridor of the school a plaque was erected, on it a somber message of loss and sadness — words from Mordechai Gebirtig, (a preeminent folk artists in literature and song who was inhumanly murdered in the Ghetto in 1942): “Zegnaj mi Krakowie“ (Wish me goodbye, Krakow).

Though the Jewish Krakow of old is no more and is filled mostly with tragic memories of a glorious world, thanks to the resuscitation of their memories by Principal Olszawska, another small piece of Jewish Krakow has been given a voice, an image, a memory. Let their names be bound in the bond of eternal life and let those righteous Gentiles who believe in restoring the memories of Jewish Poland be blessed.

Below is the list of names of the 87 girls found in the archive in the school. 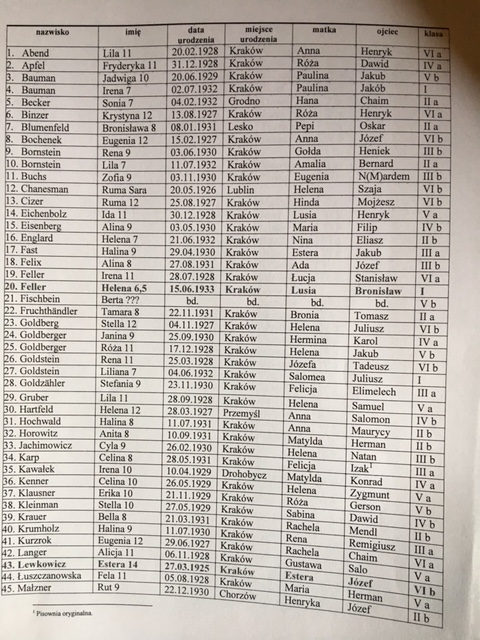 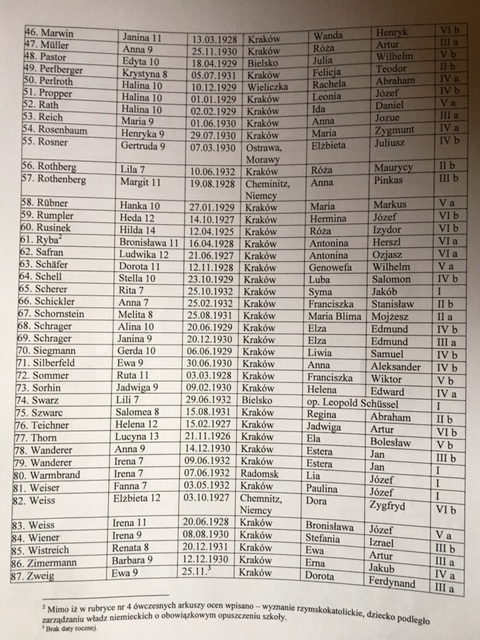