Last week, I pointed out that there is a fragment of the Dead Sea Scrolls which seems to be referring to Jesus of Nazareth. In four lines, the Dead Sea Scrolls fragment makes use of four words associated with Jesus and his crucifixion: “dove”, “cross”, “nail” and “mourning”. It refers to someone codenamed “Yonah”. In Hebrew and Aramaic, “Yonah” means “dove”, a term associated with Jesus. It’s also the name of the only prophet that Jesus compares himself with i.e., the prophet “Jonah” (Matthew 12:41). In the Dead Sea Scrolls, this dove/Jonah seems to have suffered crucifixion and the writer of the fragment is asking the dove’s disciples not to focus on the “nail” of the crucifixion, and not to “mourn”, but to do that which the dove/Jonah has asked of his followers. I think it’s pretty clear that here we have a reference to Jesus in a previously unknown text, that dates back to the time of Jesus.

Given the above, I looked up the only other clear reference to crucifixion in the Dead Sea Scrolls. Scholars call this fragment “11QT54”. I was wondering whether this, too, was a reference to Jesus. After all, the Dead Sea Scrolls were not recording history, they were expressing theology. If they are referring to a crucifixion, they must have had a theological reason – pro or con – with respect to the one crucified. Otherwise, why mention a convicted and crucified felon? 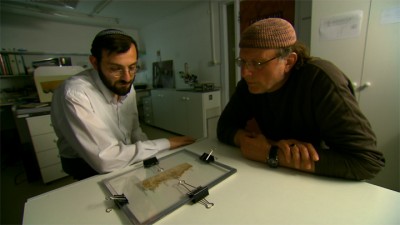 When I looked at “11QT54”, at first it seemed to be a straightforward quotation from the Book of Deuteronomy (21:18) legislating how to deal with a “rebellious” son who is a “glutton and a drunkard”….nothing to do with Jesus. But then came the eureka moment.

Twice in the Gospels (Matthew 11:19 and Luke 7:34) Jesus explicitly states that there are those who call him a “glutton and a drunkard”. Many think that he’s just quoting people who are out to insult him, but that’s not the case. Jesus is quoting enemies who are themselves quoting the Bible i.e., Deuteronomy 21:18. There, it states that if a man has a “stubborn and rebellious” son who is labelled a “glutton and a drunkard”, the son must be sentenced to death! These terms, “stubborn and rebellious” and a “glutton and a drunkard”, are not insults thrown at alcoholics, but formal accusations requiring nothing less than capital punishment. Essentially, they are accusations involving heresy, rebellion and treason. In the Gospels, Jesus acknowledges that there are those among his enemies who would accuse him of a capital crime. Recently, my friend Ross Nichols pointed out to me the connection between the “glutton and drunkard” line in the Gospels and the passage in Deuteronomy that uses the same terms.

In the Dead Sea Scrolls, the writer of “11QT54” also makes these connections. He quotes the passage in Deuteronomy which refers to a “glutton and a drunkard” and then suddenly changes the Biblical text. He introduces new lines that are not present in the Book of Deuteronomy. He then switches back to the Biblical text. In the inserted lines, he alludes to “a man” who “passes on information against his people or betrays his people to a foreign nation”, and is deserving of crucifixion. Who is this man and what foreign nation is the writer of the Dead Sea Scrolls fragment talking about?

The Rabbinic Talmud gives us the answer. It explicitly states that Jesus was “close to the [Roman] government” (Bavli Sanh 43A, quoted in “Jesus in the Talmud”, Peter Schaefer, p. 65). In fact, in the daily Jewish prayer service, as part of the Amidah, a Jew’s most intimate dialogue with God, the 12th “benediction” is a leftover attack on the original followers of Jesus, who are accused of being “malshinim” i.e., Roman collaborators. Put differently, from the beginning of the Jesus movement, according to Jesus himself and the Rabbinic tradition, there were those who accused Jesus of being a “glutton and a drunkard” i.e., a “stubborn and rebellious” son of Israel deserving crucifixion.

We now find that right in the Dead Sea Scrolls, after the Biblical citation and the reference to “a man who betrays his people”, the ancient writer states “you shall crucify him on a tree [i.e., a cross] and he will die”. Who is the Dead Sea Scrolls writer talking about? Obviously, it’s Jesus of Nazareth. The writer of the Dead Sea Scrolls is making the same connections that Jesus makes when he quotes his enemies referring to him as a “glutton and a drunkard” i.e., a traitor and a collaborator. The writer of “11QT54” seems to be one of the enemies that Jesus is aware of and refers to in the Gospels.

In the Dead Sea Scrolls fragment, right after the reference to Jesus, the writer goes on to take a swipe at yet another man. This one initially avoids the death penalty and “escapes among the nations and curses his people, the children of Israel”. The Dead Sea Scrolls writer states that this man, too, “shall be crucified and he will die”. Could this be a reference to Paul? After all, in the Book of Acts (21:27-34), in almost the same words as the Dead Sea Scrolls, the crowd in Jerusalem accuses Paul of “teaching everyone everywhere against our people and our law”. It then describes Paul barely escaping with his life from the hands of the incensed Israelites. Paul is then protected by the Roman authorities, makes it to Rome and, according to Christian tradition, is crucified there. Paul’s fate and the fate of this other man mentioned in the Dead Sea Scrolls, right after the reference to Jesus, are identical: they barely escape with their lives, they turn against their people and they end up crucified. The textual evidence suggests that here we’ve discovered an allusion to Paul in the Dead Sea Scrolls.

So it seems that there are at least three references to crucifixion in the Dead Sea Scrolls. One to Paul’s crucifixion and the other two referring to Jesus. The Jesus references use known terms for Jesus such as “dove” and a “glutton and drunkard”. But there is a difference. One of the two fragments seems to be written by a group that is positive to Jesus’ teachings, the other seems to be written by a group – known to Jesus – that is hostile to both Jesus and his message. Even the group that is positive, however, seems to be distancing itself from Paul’s theology of the “nail” i.e., the emphasis on Jesus’ death and resurrection, preferring to focus on Jesus’ teachings.

What does all this mean? It means that even though Jesus and Paul are referred to in the Dead Sea Scrolls, at this point, we cannot draw any final conclusions about the theology of these early texts. In any event, one thing is for certain: The Dead Sea Scrolls have to be revisited and mined for information on the historical Jesus and the theological disputes between his earliest followers.