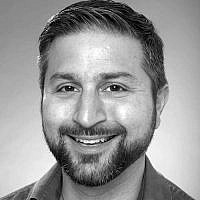 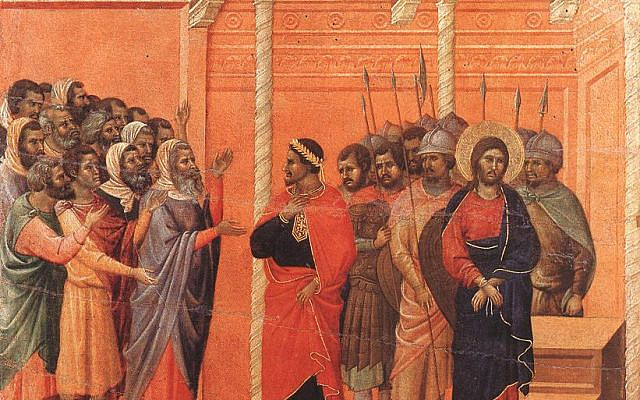 Duccio di Buoninsegna - Christ Accused by the Pharisees via Wikipedia

Judaism arose in the ancient Eastern Mediterranean in the 2nd millennium BCE and the heritage of modern Jews is rooted in what the Hebrew Bible calls הים הגדול. The Great Sea. Jews were dispersed from their ancestral homeland of Judah during the Babylonian, Hellenistic and Roman diasporas. It is in this historical context that we understand the origins of Jesus.

Who was ישוע, which was his name in Aramaic, the spoken language of 1st century CE Judea and Galilee?

A Jew in the Jewish homeland as described by biblical scholar John Dominic Crossan, author of “The Historical Jesus: The Life of a Mediterranean Jewish Peasant.”

And that Jewish homeland was and is on the shores of the Eastern Mediterranean.

“He’s of Mediterranean stock, and it’s quite clear what that means. We see people like that in the world today, and that should end the matter,” said Vincent Wimbush, an expert on ethnic interpretations of the Bible.

And who are these modern populations of “Mediterranean stock” similar to Jesus of Nazareth?

They include Western Diaspora Jews — Ashkenazi, Sephardic, Italkim, Romaniote and North African. Also Eastern Diaspora Jews or Mizrahim including Iraqi Jews who could be the closest contemporary approximation to Second Temple period Jews such as Jesus according to Israeli biohistorian Yossi Nagar’s research on skeletal remains.

There have also been recent genetic studies showing that Levantine Christians, Druze and Samaritans share a continuity with the ancient inhabitants of the Levant.

Author Martin Goodman writes in his book “Rome and Jerusalem: The Clash of Ancient Civilizations” that “Jews generally looked like non-Jews. Romans often noted that foreign peoples looked different from themselves but apart from the male circumcision they never noted this of the Jews.” In other words Jews and Romans were indistinguishable including Jesus and that could be said of today’s Mediterranean populations who often are hard to tell apart whether Ashkenazi Jew, Sicilian Christian or Lebanese Muslim.

About the Author
Joshua Robbin Marks is a Jewish journalist based in Southern California. He has written for The Jewish Journal of Greater Los Angeles, Washington Jewish Week and many other publications.
Related Topics
Related Posts
Comments