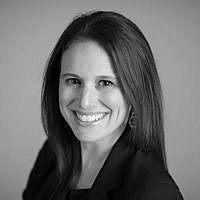 The Blogs
Halie Soifer
Apply for a Blog
Advertisement
Please note that the posts on The Blogs are contributed by third parties. The opinions, facts and any media content in them are presented solely by the authors, and neither The Times of Israel nor its partners assume any responsibility for them. Please contact us in case of abuse. In case of abuse,
Report this post. 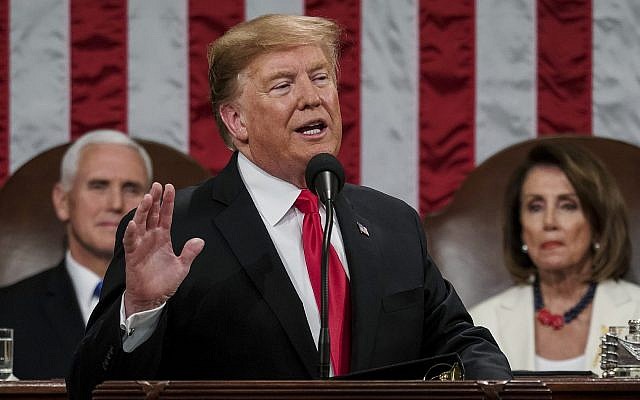 US President Donald Trump gives his State of the Union address to a joint session of Congress, February 5, 2019, at the Capitol in Washington, DC, as Vice President Mike Pence, left, and House Speaker Nancy Pelosi look on. (Doug Mills/The New York Times via AP, Pool)

In his State of the Union address, US President Trump recognized Jewish American war veterans, Holocaust survivors, and a heroic police officer wounded during the horrific Tree of Life synagogue shooting. While such heroism should be recognized by all Americans, we are appalled by this contrived effort to mask Trump’s poor record on issues of concern to the Jewish community. This includes his abhorrent record on anti-Semitism, a domestic policy that is antithetical to our values, and a reckless foreign policy that endangers American and Israeli national security interests. The president should be judged on what he has said and done in recent years, as opposed to a mere 82 minutes of carefully scripted theatrics.

In 2016, Trump campaigned for president using anti-Semitic imagery and rhetoric. In 2017, after neo-Nazis marched in Charlottesville chanting “Jews will not replace us,” he publicly created a moral equivalence between those professing hate and those protesting it. Last year, Trump proudly identified himself as a “nationalist,” embracing a term historically used in association with Nazism and white supremacy. He has espoused hate-filled rhetoric targeting Jews and other minority groups, while refusing to denounce white nationalism. Since becoming president, Trump has both inspired the unprecedented rise of anti-Semitism in our country and done little to combat it.

We deeply respect and honor survivors of the Holocaust, as well as those who liberated them, but will not forget that President Trump omitted any mention of Jews in his first Holocaust Remembrance Day statement. We will not forget that he delayed the appointment of a Special Envoy to Monitor and Combat Anti-Semitism for more than two years, while appointing at least two senior White House advisers associated with the anti-Semitic alt-right movement his first weeks in office. We will not forget that he refused to denounce Ku Klux Klan leader David Duke and has publicly repeated anti-Semitic dog whistles and conspiracy theories. These dangerous actions speak louder than scripted words, and expose the president for who he really is.

Trump has implemented a domestic agenda that goes against our core Jewish values. He has enacted a “zero-tolerance” immigration policy that has ripped away children from their parents and closed America’s borders to those seeking refuge and asylum. He has completely ignored the crisis of gun violence in our schools and communities, denied the science of climate change and reversed environmental protections, and restricted access to affordable healthcare and public education. His insistence on fulfilling a campaign promise to build an unnecessary border wall has demonstrated that he is either unwilling or unable to recognize the best interests of our country. There is no security crisis on our southern border, and we reject his ongoing lies that have cost him credibility with all Americans. The president created an economic, security, and social crisis by closing the government for 35 days in a sophomoric temper tantrum, and we call on Congress to ensure this not happen again.

In the State of the Union, the president made reference to his abrupt decisions to withdraw from the Iran nuclear agreement and remove all US troops from Syria. Unilateral withdrawal from the Joint Comprehensive Plan of Action (JCPOA) has left the United States isolated from the international community’s effort to contain the Iranian threat, while – according to Trump’s own intelligence leaders – Iran continues to comply with the agreement. Declarations via tweet of a precipitous US military withdrawal from Syria cost the president his secretary of Defense, forced his National Security adviser to condition and rollback Trump’s own policy, and paved the way for expanded Iranian influence across the region. These are not bold policies that demonstrate America’s strength. Rather, they are reckless demonstrations of Trump’s failure to implement a foreign policy that serves the national security interest of the United States or our allies, including Israel.

Jews have no obligation to issue perfunctory praise of Trump’s choreographed, hollow words, even those that were specifically devised to pander and appeal to our community. We will continue to honor those Jewish Americans and others at the State of the Union deserving of praise and admiration. At same time, until he proves in both word and deed that the last two years were an aberration, our values compel us to hold our applause for President Trump.