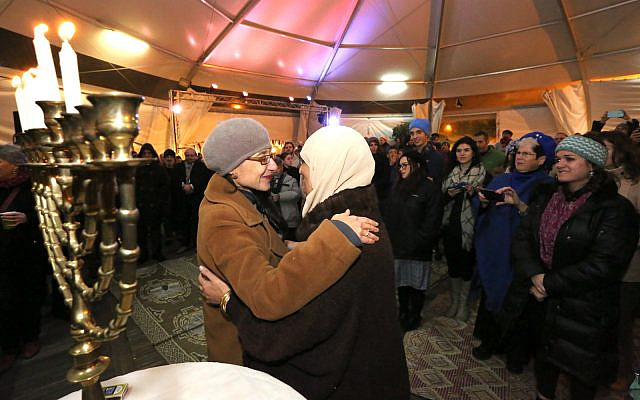 Illustrative: Jews and Arabs light Hanukkah candles at an interfaith event at the First Station compound in Jerusalem on December 10, 2015. Rabbi Tamar Elad-Appelbaum is on right. (Yossi Zamir/Flash90)

One of the most significant, if least noticed, corollaries of the upheaval magnified by the coronavirus in Israel is the revitalization of a series of efforts to establish a meaningful Jewish-Arab political partnership in the country. These have sparked an intriguing discussion on alternatives to the existing — and highly exclusionary — political divisions characterizing Israeli politics today. The common thread that runs through these initiatives is the quest to define and implement an inclusive, equitable, citizenship-based approach to what it means to be an Israeli today.

The impetus for the current debate was the publication of a call issued in Haaretz by a group of Jewish public figures composed of former ministers, members of the Knesset and leading political activists to join a common political framework of Arabs and Jews (full disclosure: the author is one of the signatories). This appeal, under the name Brit (Alliance) has given an additional push to a variety of already existing efforts, including those of the Israel Democratic Party (a group of academics and activists committed to the realization of a shared society in the country); a nascent party in formation led by former Haifa mayor Yona Yahav and Ali Salam, mayor of Nazareth; the ongoing campaign by Ayman Odeh, chair of the Hadash party and the head of the Joint Arab List, to build a robust Jewish-Arab coalition; as well as a multiplicity of civil society undertakings ranging from DemocraTV to regional council collaborations and grassroots campaigns. All are based on the premise that the political deadlock that has plagued Israel in the past three elections, and is likely to do so again during the course of the coming year, cannot continue any longer. If it does, it will tear Israel apart from within.

These various moves seek to address not only the ongoing systemic segregation between the Jewish majority in Israel and its Arab minority (which constitutes a full 21% of the population), but also the legal and latent discrimination against Arab society in Israel, which has intensified since the adoption of the basic law: “Israel, the Nation-State of the Jewish People” in 2018. They also attempt to come to grips with the growing gap between the rising socioeconomic absorption of Palestinian citizens of Israel (which has been further accelerated, albeit not always equally, since the outbreak of the pandemic) and their isolation from the centers of decision-making in the country (in stark contrast to the ultra-Orthodox, whose political power has increased while their social cachet has plummeted). A long-overdue political realignment is in order.

Above all else, the renewal of the search for a political formula for Arab-Jewish cooperation stems from the desire to give contemporary form to the foundational principles of equality, justice and peace that guided the founders of the state. In a period of democratic backsliding, the absence of a common concept of citizenship threatens to unravel what is left of Israel’s democratic infrastructure and to leave it in a self-imposed ethno-nationalist cage with little room for either the country’s non-Jewish population or for its underlying norms.

Such a scenario also enfeebles Israel regionally, since it is becoming increasingly difficult to explain — let alone justify — the inability to forge equitable relations between Arabs and Jews within the country just as overtures in this direction are being stepped up in the wake of the normalization with several Gulf states. And it renders the country totally out of tune with other states in the democratic world, which are now confronting the immense challenge of having to deal with past mistakes in the midst of an overriding health crisis with untold socioeconomic consequences.

The vision of a Jewish-Arab political partnership is therefore, by definition, change-oriented. It is based on the very belated understanding that decades of bias and prejudice have not only needlessly oppressed Arab citizens, but also seriously undermined the inner fabric of Jewish society as well. From this perspective, introspection and, yes, atonement, is critical. So, too, is the molding of a workable and a mutually beneficial alternative for the two peoples inhabiting the land based on common values and mutual respect without ignoring divergent national, religious and social affinities. The updating of the definition of Israeli citizenship in line with contemporary realities is, therefore, the key to the way forward.

The main strategy for achieving this goal is that of mainstreaming: assuring the integral involvement of Palestinian citizens of Israel in all centers of decision-making at the national level (representation), the incorporation of their perspectives in the design of policy on issues ranging from personal security and wellbeing to employment and climate change, and the allocation of resources to ensure the ability to address the specific needs of all groups and sectors in Israeli society. The mainstreaming approach, originally devised to promote gender equity, while not denying the need to shore up heretofore weak or marginalized segments of Israeli society, presumes that this task is a common effort — first and foremost of Jews and Arabs working in tandem. It requires a fundamental adjustment in the collective mindset: in the centrality of equality and justice in advancing change in order to set in motion a constructive dynamic of human security and progress.

The mainstay of such a common strategy is the construction of coalitions. The Arab-Jewish one is the most important in the struggle for a durable peace, but it, too, can take on different forms in varying contexts. Thus, on religious matters, the religiously conservative United Arab List (Ra’am) may have more in common with Shas than with Yesh Atid (as last week’s controversy over the vote on a parliamentary commission of inquiry demonstrated so starkly). In the same vein, the pursuit of social-democratic values may bring together Hadash and Meretz, but not necessarily Balad or Yemina. The benefits accruing through cross-cutting collaboration are surely tangible and concrete; they also have the added value of propping up social solidarity. Ingrained in the notion of a value-based common citizenship with full rights for all is therefore both a trajectory for a better future as well as method for its realization.

It is relatively easy to dismiss this vision (as diehard ultra-nationalists have already done) or to critique elements of its approach to implementation. Some detractors have stated that it may be a last-ditch effort by the remnants of the left to salvage some political clout. Even if this is partially correct (although the initiators have foresworn any further personal political ambitions), it hardly diminishes the potential power of their proposals. Other critics have questioned the heavily Jewish composition of the latest appeals. They conveniently ignore the fact that the onus in this instance—as in the case of powerful hegemonic groups elsewhere—lies first and foremost on the shoulders of the ruling majority. They also overlook numerous Arab overtures rejected by seemingly enlightened leaders in the past. Some say that this an effort to undermine Arab political solidarity after the success in the March 2020 elections (although polls show slippage in support in recent months). Such claims fail to take into account the almost complete political isolation of the fifteen members of the Joint List.

What unites all these skeptics is their insistence on the low probability of such a project. Many argue that the absence of agreement on a political framework makes the entire project theoretical, while ignoring the fact that several possibilities exist for joint Jewish-Arab partnerships in existing and new parties and that in any event such an undertaking is a process that takes time. Some proceed to point out that similar efforts in the past failed; they overlook recent changes and their impact on the body politic.

Indeed, most critics have been happy to punch holes in these new ideas while refraining from offering any serious alternatives to an increasingly untenable status quo. The ground is shifting within Israel. The country is deadlocked politically, wavering wildly economically and at loggerheads socially. Without a normative compass, it is on the verge of falling apart. It faces tremendous challenges, not least of which, come the day after tomorrow, may be the need to revamp its strategic alliance with the United States. Yet it is reluctant to move beyond the familiar, deluding itself that somehow, some way, things will correct themselves. That won’t happen by itself.

Now is the time to begin to take control. The core ideas and values ingrained in a Jewish-Arab alliance offer a horizon for Israel’s polity with broad implications for relations among its vying social groups and hence for its societal cohesion. These notions deserve discussion, refinement, specification and action in the months ahead. By truly becoming the state of all its citizens Israel can thus begin to assure its future.