A thriving civilization is now just a museum, another piece of Jewish history that has been lost.  Without learning the true history and actually visiting, seeing with our own eyes, and touching; we lack the capability to teach our Jewish history to new generations.  It is our responsibility to share the truth in order for new generations to understand the lies that are today spoken as truths.

Rhodes, a Greek Island in the Aegean Sea that holds a city of the same name, is the largest of the Dodecanese Islands in the Aegean Sea and also known as the Island of Roses.   An Island that is 420 miles from Haifa, Israel.

The settlement of Jews in Rhodes is mentioned for the first time in the Book of Maccabees and it dates back to the 2nd century B.C.E.  The narrow, arched, paved medieval alleys of the “Juderia” (Jewish) quarter bear until today Jewish symbols.

During the past 500 years, the background of the Jews of Rhodes was influenced principally by the Jews who fled Spain at the time of the Spanish Inquisition. The Jewish community on the Island of Rhodes spoke the Ladino language (also called Judeo-Spanish) which is similar to modern day Spanish. The community more or less thrived under Ottoman rule, reaching a peak in the 1920s with some 4,000 Jews, a quarter of the total town population. It had four synagogues, a Jewish school and a yeshiva.

By the time German forces occupied Rhodes in September 1943, fewer than 2,000 Jews remained.  They had survived for more than a year after the rest of the Jews of Greece had been deported to their deaths.

As the end of World War II approached, the Germans rounded up the Jews from Rhodes and the nearby island of Kos. The Jewish community were arrested and deported to the Auschwitz concentration camp, where 1,522 were slaughtered.  In what became known as “the longest journey,” the Jews of Rhodes spent nine days on a cargo boat to Athens, followed by 13 days in cattle wagons to Auschwitz. That was the last group of Greek Jews sent to the camps.

Only 151 survived, many of whom immigrated to Southern African countries, Israel, the United States and other places. In 1947 the Island was ceded to Greece as part of the spoils of war.

Miracles happen even during war time.  “The Jewish community leaders decided to hide their Sefer Torahs. Included among these Torahs was an 800 year old Torah, one of the oldest in the world.  In secret, the Torahs were given to the Turkish religious leader, the Grand Mufti of Rhodes for safekeeping.  The Grand Mufti hid the Torahs in the Morad Reis mosque, in the pulpit. After the war, the Torahs were returned to the few people of the Jewish Community that survived.”  Ke Haber? newsletter dated 2005, page 10 by the Rhodes Jewish Historical Foundation.

“The Holocaust survivors are among the most inspiring people I have had the privilege to meet.”   Jonathan Sacks

The Kahal Shalom Synagogue is the only remaining synagogue used for services on the Island of Rhodes and is the oldest in all of Greece.   Built in 1577, the synagogue was designed in the traditional Sephardic style. 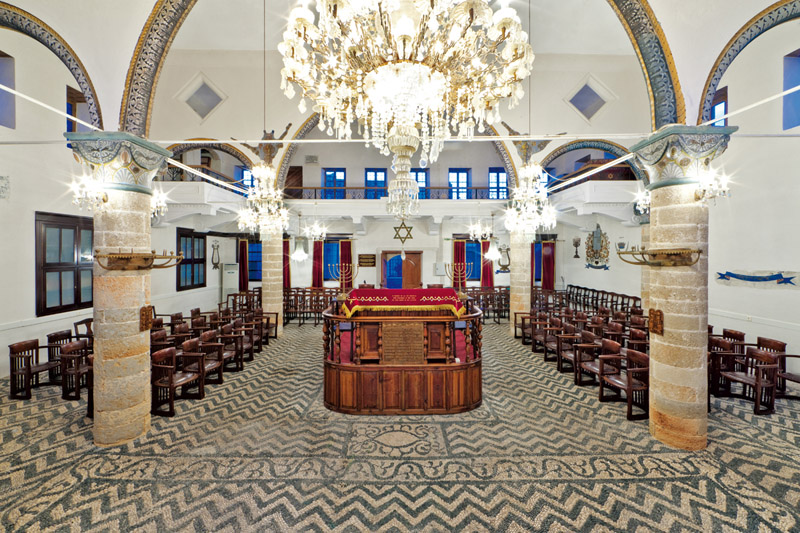 Currently, there is a small Jewish community, approximately 20 Jews, who are living on the Island.  The Synagogue is used only for prayer services when visitors or former residents and their families visit the Island for Friday night prayer services, special occasions, and High Holidays.  No need for tickets for attending the High Holidays services!!

“In the six rooms adjacent to the Kahal Shalom sanctuary is the Jewish Museum of Rhodes.  The rooms were formerly used as the women’s prayer rooms.  After the Holocaust, the rooms were vacant until the museum was established in 1997.

“The museum was created in order to preserve the special heritage of the Jews of Rhodes, as well as to promote public awareness and appreciation of its unique history.  It began as a photo exhibit illustrating Jewish life on Rhodes prior to World War 2 and in 2006, the first artifact were displayed.”  A Guidebook to the Jewish Quarter of Rhodes.

Currently it is home for a “400 Year Old Torah of Rhodes”, copy of a 1426 Siddur of Rhodes (original is at the Oxford University in England), various types of documents, and visual artifacts from “La Juderia”, 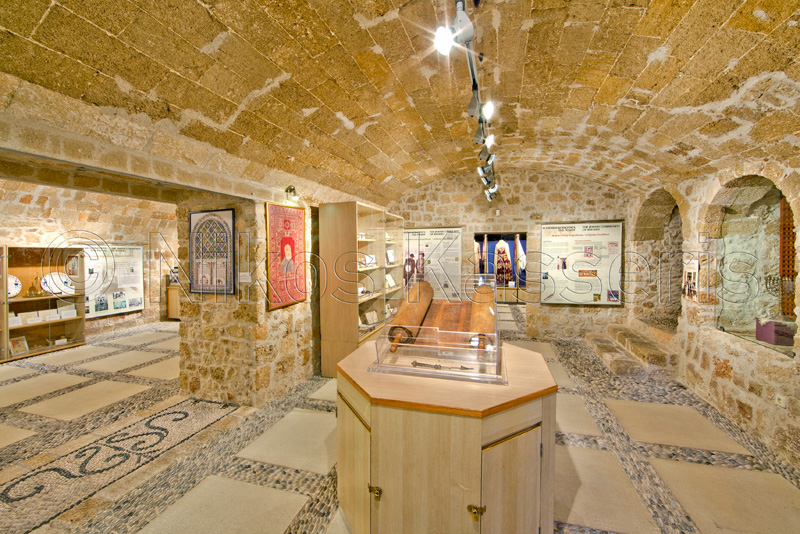 Aron Hasson, attorney from Los Angeles and Rhodian third generation, is the founder and the one who inspired the idea of creating a museum.  He noticed the lack of information available for visitors to learn about the unique history of the Community.  A perfect example of one person taking an idea and making a difference.  As Jews, we need to remember our history and not allow others to destroy our past.  The Jewish Museum of Rhodes maintained by the Jewish Community of Rhodes.

Since 1997 the Rhodes Jewish Museum has produced a newsletter, called “Le Haber?” A very informative source to find out “what’s new” regarding Rhodes Jewish history and events.

Both the Synagogue and the Jewish Museum of Rhodes are open daily 10:00 a.m. to 3 p.m. for the period April – October.  Closed on Saturday.  Yearly, approximately 20,000 tourists experience the architectural shapes and interior designs of the long lost Sephardic Community of the 16th Century.  For the period November – March, the venues are open only upon request.

Much of the western border of Israel is the Mediterranean Sea.  One of the modes of transportation to Rhodes is by ship. Mano Cruise, an Israeli company, is the only cruise line with a “home port” located in Haifa.   Since 2009, Golden Iris, formally the Cunard Princess, has sailed to Greece, Cyprus, Italy, Romania, Bulgaria, and Italy.  Sailing March to November; except, is at “home port” for Yom Kippur.

The first step of your 420 mile journey to Rhodes begins the moment you stepped on the Golden Iris. A warm welcome by the crew, nice stateroom, three kosher meals to “die for” (Certification: Chief Rabbi Yitzhak Dayan of Geneva), entertainment, updated exercise equipment, “duty free shopping” on the ship. Las Vegas style casino, bet Knesset, spa, beauty salon, and a swimming pool where you can relax while at were at sea.

Why not set sail to learn history, so history will not repeat itself?  “Twenty years from now you will be more disappointed by the things that you didn’t do than by the ones you did do. So throw off the bowlines. Sail away from the safe harbor. Catch the trade winds in your sails. Explore. Dream. Discover.”   –– Mark Twain

About the Author
Andee Goldman moved to Israel in 2006 from Las Vegas, Nevada. Since 2008, as a nonpartisan, she has volunteered helping Americans overseas to vote in America's Federal Elections. YOUR VOTE IS YOUR VOICE https://www.nass.org/can-I-vote As an Israeli, she has become a history buff and enjoys sharing her experience and travels around Israel and the world!! Andee is available to answer your voting questions at votingfromabroad@gmail.com
Comments