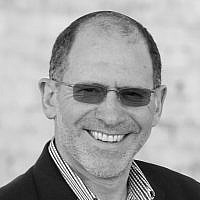 The Blogs
Kevin Bermeister
Apply for a Blog
Advertisement
Please note that the posts on The Blogs are contributed by third parties. The opinions, facts and any media content in them are presented solely by the authors, and neither The Times of Israel nor its partners assume any responsibility for them. Please contact us in case of abuse. In case of abuse,
Report this post.

Lynn Schusterman, Angelica Berrie and their foundations are leading co-benefactors including for Bronfman, Steinhardt and Nevzlin to use Israeli public funds allocated by Jerusalem Mayor Nir Barkat for a modern cultural exposé that defies long surviving Jewish tradition. They must all believe the modern ‘New Yorker’ inspired ideals should also be heard on the Temple Mount in the midst of the essential millennial struggle. They may posit the facade of “awareness” for their “Season of Culture” expression of temple ideals through the millennia, however use of public Jerusalem City licenses, funds or resources is a question of strategic and national importance.

Schusterman and Berrie’s blinkered cultural snapshot is nothing more than retrospective, historical bastardry that relegates time-honored, Jewish tradition to the graveyard of their contemporary opposition. One of their sponsored artists, Santiago Sierra stated ”I can’t get the images of Palestinian children quartered by the glorious Israeli Army out of my mind”. 4000 years of Jewish history have been decimated, montaged to favor artistic fascination for idol worshippers and religions inspired by wayward Jews, the object of their Jewish psychosis. Throughout Jewish history fast dissipating Jews adopted and embraced similar foreign ideals each time to the detriment of Jewish culture and its people.

It’s one thing if Prime Minister Netanyahu, Culture Minister Miri Regev and Israel’s leaders permit expressionism in the private domain, but the Jewish State of Israel must decide its self-expression, its Jewish culture and ensure it is not co-opted by those who would have it express their private, often political ideology instead. This Jewish state of Israel schizophrenia is intolerable! Notwithstanding sympathy for activists, transgenders, pacifists or gays as minorities, issuing public licenses, contributing public resources and diverting public funds to their causes on behalf of the Jewish Israeli tax paying majority is an abuse of power that must be curtailed.

I’m writing to highlight the sea-change traditional Jews are bringing to the world. Not Jews who would contain people to “bantustans” of Israel, nor Jews living in ivory towers to separate themselves from the ideals they promote, nor Jews who promote alternative realities to satisfy their social insecurity. I’m talking about Jews who have found a reasonable life with and among people of myriad cultures, who engage in separations that afford the highest respect and regard for traditional Jewish cultural survival. These are the people around which modern Jewish Israel is presently being shaped, they hold fast to the oldest, most consistent of Jewish traditions. This is Jewish culture, the one Jews and people of the world should promote without toying or deference to foreign ideals.

Israel’s historically consistent traditions have survived thousands of years enabling a diverse  Jewish culture. Yes, from time to time through history, ideological differences have divided Jewish populations, but Torah always remained core to Jewish religions. Jews who leverage their wealth to promote new Jews, social ideas, new philosophies, competing ideology and alternative diversity in Israel do so to the great peril of the Jewish people. They need to stop their provocative liaisons, but in the very least the State of Israel and the City of Jerusalem must not allow itself to be enjoined.

About the Author
Kevin Bermeister is the founder of www.Jerusalem5800.com, a master plan for Jerusalem through the year 2050. Bermeister is a technological innovator, developing substantial businesses in the computer, multimedia and Internet industries. Among his many accomplishments, he was a founding investor of Skype in 2002. He is also an active investor in Israeli real estate.
Comments