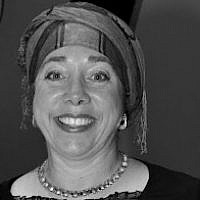 The Blogs
Jenni Menashe
Apply for a Blog
Advertisement
Please note that the posts on The Blogs are contributed by third parties. The opinions, facts and any media content in them are presented solely by the authors, and neither The Times of Israel nor its partners assume any responsibility for them. Please contact us in case of abuse. In case of abuse,
Report this post.

I firmly believe that the title of ‘The Chosen People’ does not in any way shape or form make us better than anyone else; rather we are chosen to do a job.  It is doing this job and doing it well that can make us great.

I came up with the Jewish and Jew-ish term regarding relatives who due to their membership in one of the Jewish movements (meaning Reform etc), believe themselves to be Jewish and who affiliate Jewish but according to traditional Jewish law (halacha) don’t actually qualify.  They aren’t Christian, they aren’t Muslim but they aren’t accepted as Jewish across the board either.  This is actually a very interesting situation to be in.

All Jews who qualify under the guidelines of halacha are obligated to keep the 613 mitzvot (commandments).  We can only actually keep about a third of them today while we have no Beit HaMikdash (Temple in Jerusalem).  And let’s face it there are a lot of Jewish people out there who don’t keep much.  Those that are Jew-ish (meaning those who don’t qualify as Jewish under these guidelines but still see themselves as Jewish) are in fact Noahides.  These are people who are technically Gentiles but align themselves with traditional Judasim.  They fully take on the 7 Noahide commandments that were given to Noah after the flood, for all of humanity for all time.

The Seven Noahide laws are:

So here is the question, why keep these Jew-ish people in self delusion and thinking they are possibly ‘bad’ Jews when in fact they are fantastic ‘Noahides*’?

That’s it.  No obligation for keeping kosher (enjoy the pork and shell fish), no obligation to wake up early in the morning and make up a minyan (you can sleep in), no need to put your kids through the painful process of learning for their Bar or Bat Mitzvah, and forget about the Passover Seder and a week of suffering through Matza (and Matzaitis).  Continue to pray to the one G-D, creator of the universe and keep the seven commandments.

I have a number of friends who converted and I always have to ask WHY?  You are free from the obligations, why take them on and the best answer I ever got was from my friend Hanna Yael who said, ‘When I knew the truth I couldn’t stay a cheerleader on the side lines, I had to get in the game’.  Make no mistake I’m speaking about converts who take the whole thing seriously and keep the full spectrum of Mitzvot and put most secular Jews I know to shame.

Today the majority of world Jewry affiliates with traditional Judaism (read Orthodox if you must) although most North Americans will be shocked to hear this.  In most countries of the world the ‘movements’ are very small and Jews belong, whether they keep Mitzvot or not, to traditional communities.  The life cycle services, birth, brit, B’nai Mitzvahs, weddings, divorce and death are all done through the traditional bodies, so that there are no questions of Jewish or Jew-ish ness.  It’s only when things are done outside of the status quo that there becomes a sense of dissent.  I suggest strongly that anyone who cares about their Jewishness, keep life cycle events to the traditional stream in order to maintain yourselves and your families within Klal Israel.  By all means daven where you like.  I’ve just seen too many people go through painful and difficult trials and tribulations when having to prove their Jewishness for the purpose of marriage, somewhere down the line.

The truth is that the world intermarriage rate is staggering, in America its almost 60% and as people marry out they no longer affiliate Jewish and even if they do, it doesn’t last down the line.  Malcolm Hoenlein, Executive Vice Chairman of the Conference of Presidents of Major Jewish Organizations stated at the Israeli Presidential Conference that ‘Today how people consider their Jewishness is if their grandchildren will be Jewish’.  I’d like to take this a step further and say, will your great grandchildren will be Jewish?  Many people try to scoot around this one either because ‘if my daughter marries out at least my grandchildren will still be Jewish’ or they’ll still be Reform Jew-ish (or Liberal or Progressive etc…).  Others don’t seem to care about their great grandchildren because they figure they won’t be around by then.

I see the point of hanging on to every Jew, even by a thin thread, much like Chabad/Lubavitch which prides itself on keeping every Jewish soul in the fold and seeking them out and giving them as much ‘Jewish’ as possible.  An old friend of mine is married out yet she and her husband agreed that the children would be raised Jewish.   He didn’t convert and remains a Noahide and learns with the local Chabad Rabbi when he can.  Yet I also see the point of cutting loose, in particular, those who aren’t obligated.  I’d much rather Jew-ish than anti-Semite but I also think that we aren’t being fair in continuing with Jewish guilt where none needs to be.

*Use Google to find more on the Noahide worldwide community.

About the Author
Jenni Came to Israel on a one year program in 1984 and is still here; She is a Mother of 6, and wearer of many hats (pun intended) She is owner of Israel Simcha Central, an events planning and tourism service which specializes in personalized itineraries.
Comments