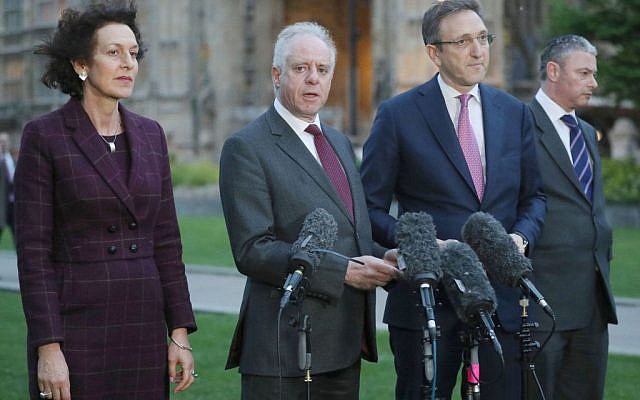 The Board of Deputies chief executive Gillian Merron, former president Jonathan Arkush and Jonathan Goldstein and Simon Johnson of the JLC after meeting Jeremy Corbyn in 2018.

The way the British Jewish community is led has over the years been much admired by non-Christian denominations. But it is confusing. I am always struck that when the media urgently looks for a spokesperson, it is never quite sure where to go.

The Board of Deputies of British Jews, which has been around more than 250-years with its semi-democratic structure, ought to be the first port of call.

But layered on top of that we have the Jewish Leadership Council (JLC), formed because some community worthies felt the Board did not always throw up the effective leadership and is hamstrung by a sclerotic decision-making structure and a lack of resources. There is a view that at times of intense stress in the community, as at present, it has been too timid.

The creation of the Campaign Against Anti-Semitism, a grassroots group made up largely by a younger cohort, was a direct reaction to what was perceived as a lacklustre response to the Gaza Operation Protective Edge in 2014. The ‘Campaign’ was created spontaneously, organising rallies to combat the anti-Jewish sentiment whipped up by Israel’s action.

One of the consequences of this plethora of Jewish organisations is that successive UK governments never quite know who is in charge. As a former Board vice-president, I watched with some bemusement the clashing opinions each year as to who would represent the community at the regular meetings at No 10 Downing Street. Jews have the clout, but the voice was muffled by the search for prestige.

Amid all of this, the religious leaders, from all branches of Judaism, stood above the fray. When necessary, they have drawn upon their immense moral authority and intellect to have their say. In recent times there has never been a more effective intervention in politics than that of Chief Rabbi Ephraim Mirvis during the current General Election campaign.

Labour’s feeble approach to dealing with anti-Jewish and anti-Israel insults and invective has been  shameful, hence Mirvis’ article in The Times. His and an earlier intervention by a leading progressive Rabbi Jonathan Romain were brave, far-sighted and necessary.

The authority of the community’s religious leaders has not necessarily been recognised in the past by all sections of British Jewry. But they have been encouraged – by the timidity of the secular leadership – to take a stand. Yes, the Board together with the JLC and Jewish News have been assiduous in organising party hustings. But the role of referee has silenced them as effective organisations publicly campaigning against Jeremy Corbyn and antisemitism.

There is almost as much on the Board’s website about combatting antisemitism in Hungary (important as it is) as there is about Corbyn and the weakness of Labour in confronting its demons. As Mirvis observed, Labour’s approach to anti-Jewish attitudes has been mendacious and the soul of a tolerant nation challenged.

Every Jewish person I encounter in my daily life – even those with no connection to the community at all – are filled with a dread greater than anything in our lifetimes. The community digs deep to support the Board and the JLC digs deep to support itself and Jewish institutions. But when it has come to being a consistent public voice, in a bitterly fought election campaign where Jewish candidates are in the line of fire, leadership has disappointed.

The chips will be down on 12 December, and the community cannot afford silence. Timidity should not be an option. The voices of Rabbis Mirvis, Baroness Julia Neuberger, Romain and others have resonated and been listened to. But it is not enough. Many Jews in Britain feel they faced an existential crisis. Such a situation required an extraordinary response from our secular leaders.

Why are we waiting?