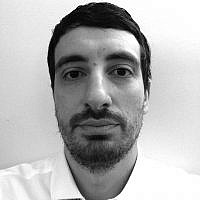 The Blogs
Eli Wishnivetski
Apply for a Blog
Advertisement
Please note that the posts on The Blogs are contributed by third parties. The opinions, facts and any media content in them are presented solely by the authors, and neither The Times of Israel nor its partners assume any responsibility for them. Please contact us in case of abuse. In case of abuse,
Report this post.

Our contemporary existence is an upside-down reality. Nowhere is that as greatly manifested as in the Middle East. As the standard of moral equivalence, the reciprocity of exploits between the Arabs and the Jews is beyond reproach. Conceding even that IDF’s presence in Judea/Samaria perpetrates physical and emotional maltreatment of the locals – its operational malfeasance is consistently paralleled to the fates of Hadas Fogel, of Yonatan Palmer, of Sinai Keinan … of Yehudit Weinberg’s son.

Israelis, and global Jewry with it, struggle with the appropriate response to such callous acts – not only with proportions of a consequential military deterrent, but mostly with the private reconciliation of the incongruence of humanity. Racheli Fraenkel is no match for self-righteous disciples of Bilaam. To human rights violators validated with a seat at the “Human Rights” Council, how much is a life worth anyway – a Jewish one no less. Land disputes and discontent can justifiably instigate premeditated homicide. Comical, were it not so tragic.

Leading nations’ shattered moral compasses have steered their vessels off the cliff of integrity – its declarations: a broken record.  Dragged to a podium to express “concern” over the three missing teenagers, the American Head of State preaches the virtues of a proportional response. Even in expressing “condolences” and “sorrow,” the EU calls for restraint “in order not to further aggravate the fragile situation.” Ostensibly, murder of innocent teens under false pretenses is not the floor here.

For Jews, there’s no lifeboat. It’s 70, 1492 and 1939 and it won’t abate. Not to detract from expressions of regard, vigils, memorial services – even prayers and cries – but, sadly, even the most gruesome act of terror is gradually disremembered. Googling the names above is the testament.

It’s not apathy or melancholy. With so many calamities, it’s a survival mechanism. In New York, the physical remoteness and spiritual detachment become a convenient façade. Tel Aviv, for once unable to hide behind its cosmopolitanism, exhibits vigorous symptoms of capture-bonding. Then again, how many more tragedies of this magnitude can this people withstand?

These maladies can only be alleviated by the candid realization that the Jewish nation, inside and outside of Israel, remains separate and apart – both in its fate and in its existence. It may desire equal treatment as a fellow UN state, it may bolster a post-modern culture, its political correctness may be unrivaled – Eisav will always despise Yaakov. It’s as true as the law of gravity. There is 3,600 years of data to support that hypothesis. The sole antidote is through Jew(ish) Pride.

Geon Yaakov is to be a proud and unapologetic Jew – expressed through Jewish acts, which, by definition, is the mitzvot portrayed in the Torah. Visiting a relative in Israel, a skeptic Russian family member asked him: “What do you need all this (miztvot) for?” Said the ba’al teshuva oleh: “I’m a Jew. I want to do something Jewish.” Through these acts will come a deeper, more profound appreciation for the status of Jew and his mission in this world. A dignified sincerity – perhaps one that will refine the self-esteem and consequently stem the tide of disharmony with other nations.

The Code of Jewish Law, the Shulchan Aruch, addresses a situation where the Jewish nation is endangered on Shabbat (Orach Chaim, Ch. 329, §6). Otherwise severely punishable, desecration of Shabbat in order to forcefully defend a border city is mandatory even if an outsider comes for some “straw or hay.” Even if there is a mere threat of such larceny, deadly force is sanctioned to rebuff the aggressor (Rem’’a). Were they allowed to thieve straw or hay, explains R. Eliezer Melamed, the entire nation’s deterrent forces would be weakened, increasing vulnerability and endangering the lives of the entire populace. Avoidance of this weakness is an absolute justification for Pikuach Nefesh, the principle in Jewish law that overrides almost any religious consideration in favor of the preservation of human life.

When the Torah itself articulates a disregard of its precepts for purposes of showing unified strength, its recipients must heed the call. Out of the Pale of Settlement, Jews have to unite on the highest common denominator rather than to bend their will to an inferior universal standard. For those living in the Land, pride is to overcome any temptation to bargain with the adversary. For those in the Diaspora living amongst other nations, pride is to openly display one’s Jewishness – not on Facebook or otherwise metaphorically, but in the street.

In the run-up to, and aftermath of, the three yeshiva boys’ murders, there was a fostering of unity unseen in the few years prior – especially between Haredi, Dati Leumi and Chiloni subsections of Jewish society. Even more than vengeance, Mrs. Fraenkel prays that Jewish people can maintain even a small bit of the unity achieved in the past few weeks.  Strength breeds unity – through Geon Yaakov, above all else.

For once, this opportunity should not be wasted.