There is no doubt that there are a lot of sincere and well-intentioned people among those who are currently promoting the argument that the refugees of today should benefit from the “lessons” to be learnt from the callous rejection of Jewish refugees in the 1930s and 1940s. Take for example the just published article by Jonathan A. Greenblatt, the National Director of the Anti-Defamation League, who argues that “xenophobia, religious bigotry, and hatred shut international doors in the faces of those fleeing Nazi Germany. The world cannot afford to make that mistake again.”

While I agree that there is indeed again a lot of xenophobia, religious bigotry, and hatred in the debate about today’s refugees, I’m afraid there is also a lot of hypocrisy and bigotry among some of those who now enthusiastically embrace this all too convenient “lesson of history.” As a matter of fact, I was alerted to the popularity of the comparison while monitoring the Twitter activity of notorious Israel-haters like Ali Abunimah and Max Blumenthal. 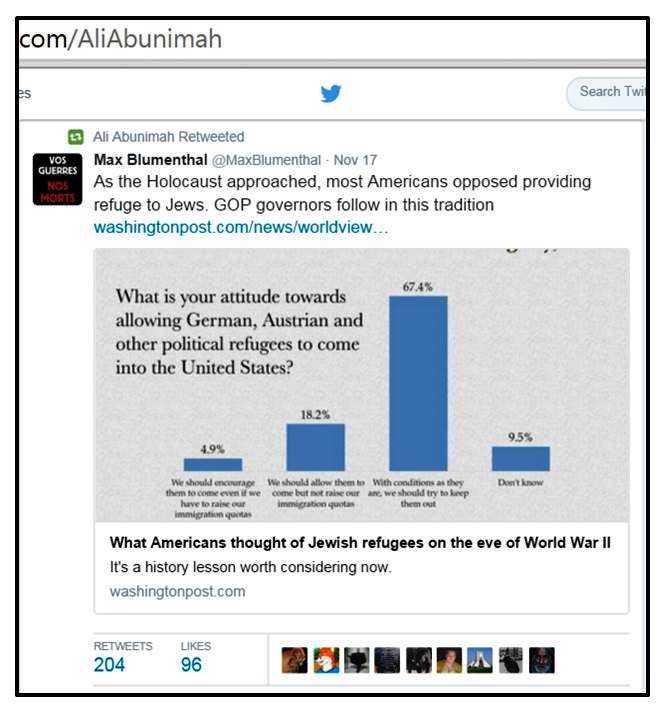 So when there is a debate about how to respond to the hundreds of thousands – projected soon to become millions – of mostly Muslim refugees and migrants fleeing war and poverty in their own countries, Abunimah and Blumenthal discover their sympathies for the Jewish refugees desperate to flee the Nazis in the 1930s and 1940s. The problem with this is that both Abunimah and Blumenthal are otherwise often busy promoting the 21st century version of the Nazi slogan “The Jews are our misfortune,” which is: “The Jewish state is our misfortune.”

Obviously, if Israel had been established just ten years earlier, many of the Jews trying in vain to find refuge from the Nazis would have had a place to go to.

However, Ali Abunimah has asserted that Zionism is “one of the worst forms of anti-Semitism in existence today,” and that “[s]upporting Zionism is not atonement for the Holocaust, but its continuation in spirit.” On the basis of these reprehensible views, he has formulated a truly Orwellian definition of antisemitism that has been endorsed by many prominent anti-Israel activists.

Max Blumenthal is the proud author of a book depicting Israel as an utterly evil state that can only be compared to Nazi Germany and should be treated accordingly. As I have noted previously, Blumenthal’s writings and video clips on Israel “not only appealed to activists campaigning for the delegitimization and elimination of Israel as a Jewish state, but were also promoted on all the major sites popular among conspiracy theorists, Jew-haters, racists and neo-Nazis: from Stormfront to David Duke’s site, Rense, and Veterans Today.”

Not surprisingly, Blumenthal and other anti-Israel activists have also promoted the preposterous equation of Israel and the terror group Islamic State. Both Blumenthal and Abunimah are also ardent apologists – if not outright supporters – of Hamas and other Islamist terror organization targeting Israel’s Jews, and both are prominent advocates for the BDS movement that tries to make Israel a pariah deserving of boycotts, divestment and sanctions, and that has recently organized a “solidarity wave” whitewashing the current wave of terror attacks against Israelis.

Of course, the comparison between the plight of Jewish refugees of the 1930s and 1940s and today’s refugees is not necessarily invalidated by the fact that it is embraced by some who hate nothing more than the Jewish state whose founders tried everything they could to save these Jews. But it is noteworthy that the Washington Post’s Ishaan Tharoor – whose articles on the subject helped to make the comparison go viral – has by now written yet another article on this comparison without getting around to noting the fact that the Jewish refugees who were turned away elsewhere might have found a safe haven if the British Mandate authorities had not buckled under Arab pressure and had taken the promise of the re-establishment of the Jewish homeland more serious.

Noting this fact would of course highlight some crucial differences between today’s Muslim refugees and the Jewish refugees of the past. For all the talk about anti-Muslim bigotry and “Islamophobia” in the West, today’s Muslim refugees obviously prefer fleeing to western countries. While the Jewish refugees of the 1930s and 1940s had no Jewish state to flee to, today’s Muslim refugees could arguably seek a safe haven also in many Muslim countries. Indeed, the Muslim countries that are members of the Organisation of Islamic Cooperation (OIC) boast of having formed “the second largest inter-governmental organization after the United Nations” with a “membership of 57 states spread over four continents.”  Supposedly, the OIC “is the collective voice of the Muslim world” and is dedicated to “ensuring to safeguard and protect the interests of the Muslim world in the spirit of promoting international peace and harmony among various people of the world.”

There are of course many Syrian refugees in Jordan and Lebanon, but they have been kept in conditions that reportedly cause many to consider returning to the war zones they have fled. But curiously, we don’t have a debate about why rich Arab Muslim countries can’t do more for Arab Muslim refugees.

Instead, we are endlessly debating western bigotry, and the Jewish refugees who couldn’t flee the Nazi genocide are held up as providing an all too convenient “lesson” of history. To be sure, Tharoor notes in one of his pieces that “there are huge historical and contextual differences between then and now,” but actually spelling out some of these “huge” differences would show that the focus on the alleged western bigotry against Muslims is somewhat problematic. It’s not that anti-Muslim bigotry doesn’t exist, but this is no reason to ignore the inconvenient fact that Europe’s Jews once again have to consider leaving their homes because a toxic fusion between age-old Christian and modern European antisemitism with Muslim Jew-hatred makes it too dangerous for them to stay. As Jeffrey Goldberg put it in an important Atlantic essay published earlier this year:

“what makes this new era of anti-Semitic violence in Europe different from previous ones is that traditional Western patterns of anti-Semitic thought have now merged with a potent strain of Muslim Judeophobia. Violence against Jews in Western Europe today, according to those who track it, appears to come mainly from Muslims, who in France, the epicenter of Europe’s Jewish crisis, outnumber Jews 10 to 1.”

Anyone who is eager to hold up Jewish refugees fleeing the Nazis should not overlook that we live in a time when Jews are once again fleeing Europe. To quote Goldberg again:

“Things have gone terribly wrong for the Jews of Europe lately, but comparing 2015 to 1933, the year Hitler came to power, is irresponsible. As serious as matters have become for European Jews today, conditions are different from 80 years ago, in at least two profound ways.

The first is that Israel exists, and has as its reason for being the ingathering of dispersed Jews. A tragedy of Zionism, the political movement to create a state for the Jews in their ancestral homeland, is that it succeeded too late. If Israel had come into being in 1938, rather than in 1948, an untold but presumably very large number of European Jews who were denied refuge by the civilized nations, including the United States, would have been saved from slaughter. Today, of course, the Jews of Toulouse and Malmö understand that Israel will take them without question, and many thousands of European Jews—mainly, though not exclusively, French—have moved to Israel in recent years.”

And let’s not forget in this debate that, while Jews have found refuge in Israel from discrimination and persecution elsewhere for more than six decades, for all of this time Israel’s right to exist as a Jewish state has been denied by the very same groups, forces and ideologies that are creating the current wave of Muslim refugees.