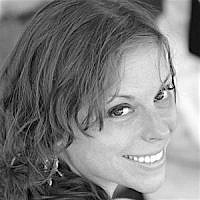 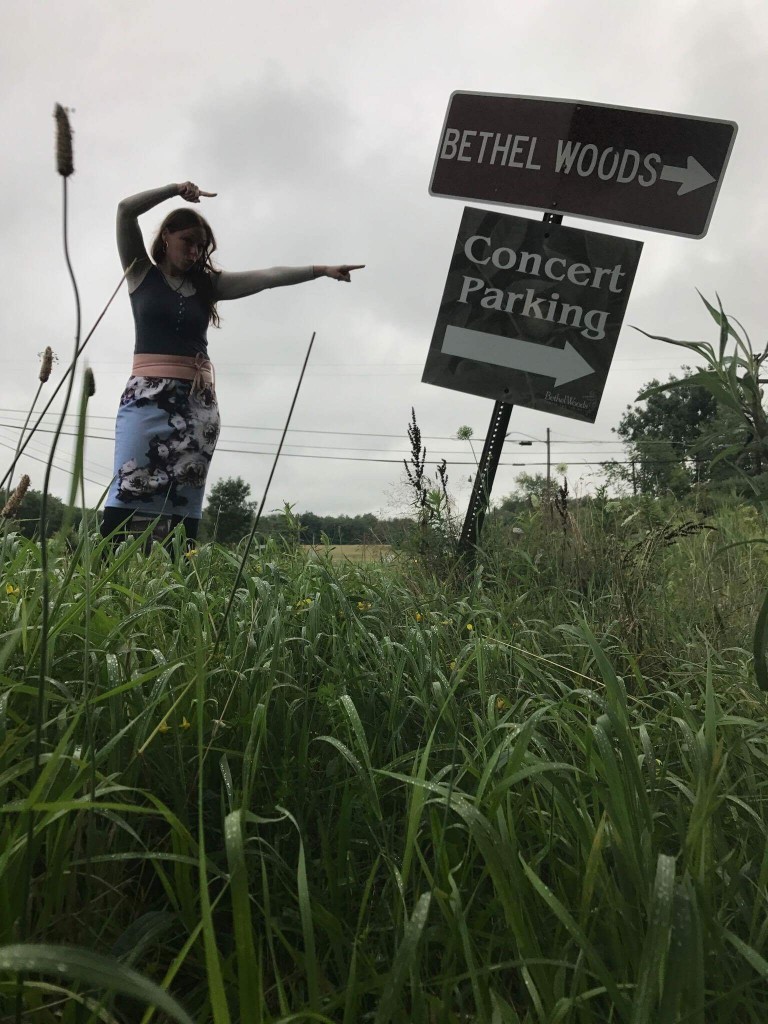 12 minutes from the Original Woodstock concert, the next generation of music’s best lovers gather together for peace love and Shabbos. Photo by Zmmrmnn

As tensions increase in the Middle East, and political turmoil in America continues to divide the nation, the next generation of culturally conscious artists gather minutes from Woodstock to sing for peace, love and.. Shabbos.

In the summer of ’69, civil unrest, the women’s movement and the Vietnam War  galvanized a counter culture of young Americans to challenge the establishment with three days of peace & music. Jimi Hendrix and his new band’s electrifying Star Spangled Banner was considered one of the defining moments of the 1960’s. Conversely, Joni Mitchell canceled her appearance to avoid camping in the muddy rain and instead watched the coverage with unbelievable FOMO. She composed the song “Woodstock” from her hotel room and gave it to her friends Crosby Stills Nash and Young to perform.

If you missed Woodstock back then, you can still go today on your way to Jeffersonville. Photo by Zmmrmnn

Indeed our fathers pioneered a youth movement to “turn on, tune in, and drop out” paving a powerful pathway for artists who believe they can change the world with  words. This summer, just 12 minutes from Beth El where the original took place, a “Jewish Woodstock” encourages hundreds of young people to love their fellow Jews, keep Shabbos, and make music for the soul. The Camping Trip is a three day Shabbat Festival in the wilderness that echoes the Exodus and was created three years ago by a band of Out of the Box Orthodox rebels with a very holy cause. After three weeks of abstaining from music, what could be better than spending Shabbos Nachamu singing zmiros with Matisyahu, Zusha, and the Moshav Band, or dancing with a thousand of your best new friends in a crazy rave party in the woods? I sat down with concert producer Ian Leiffer to ask why on earth he would create such a massive undertaking on his land.

Ms Shira: Thanks for taking time to tell us the back story of The Camping Trip. How did this project start?

Ian: The Camping Trip started in 2011 when I was in Queens College, and my roommate said, ” Hey Ian, me and a bunch of friends wanted to go to this Phish concert at Beth El Woods on Memorial Day Weekend.  Don’t you have some land up there?  Can we go camping on Shabbat and then we’ll go to the concert” ? 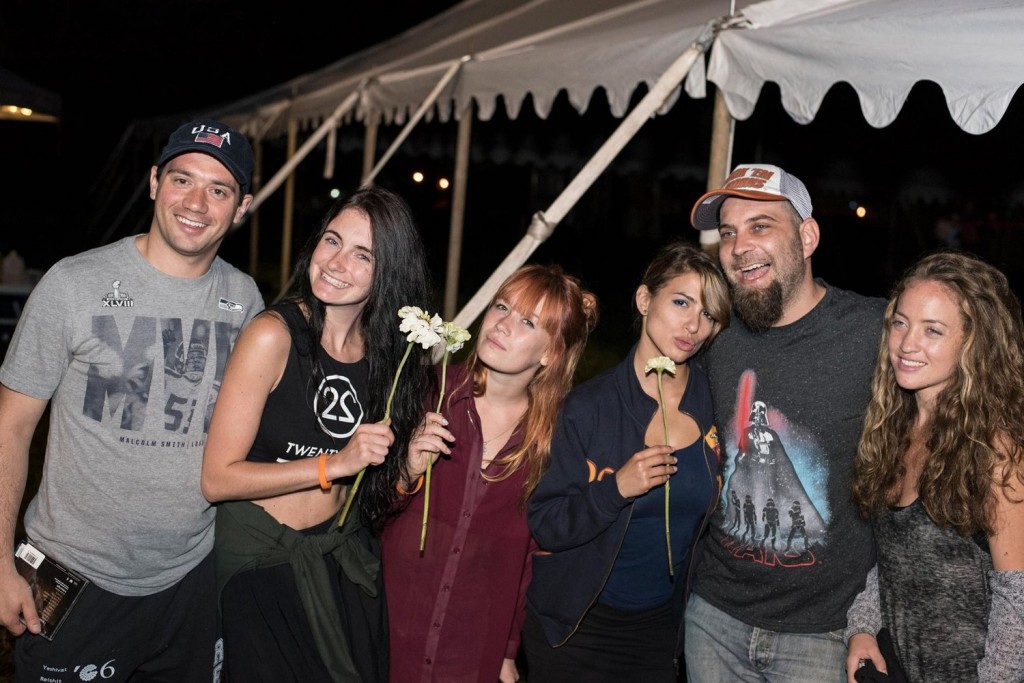 Flower Power! Over the last three years, a small group of friends camping on Shabbat has blossomed into one of the largest Jewish music festivals in America.  Courtesy thecampingtrip.net

Shira: Because Woodstock was right near you and you wanted to keep Shabbos?

Ian: Well I wasn’t shomer Shabbat at the time.  I was just making accommodations for my friends.  When we camped out that first time there were 17 of us, and it was the  most amazing experience of our lives.  Everybody bonded that weekend and I still have a kesher with who was there.  We hiked, we had Shabbat meals, we sang zmiros.  Some people kept Shabbat and others did not,  obviously I wanted to be respectful of that.  I didn’t grow up frum.  I’m the only Jewish person that was ever brought up here in the history of Jeffersonville.  You should see some of the looks I get now.” 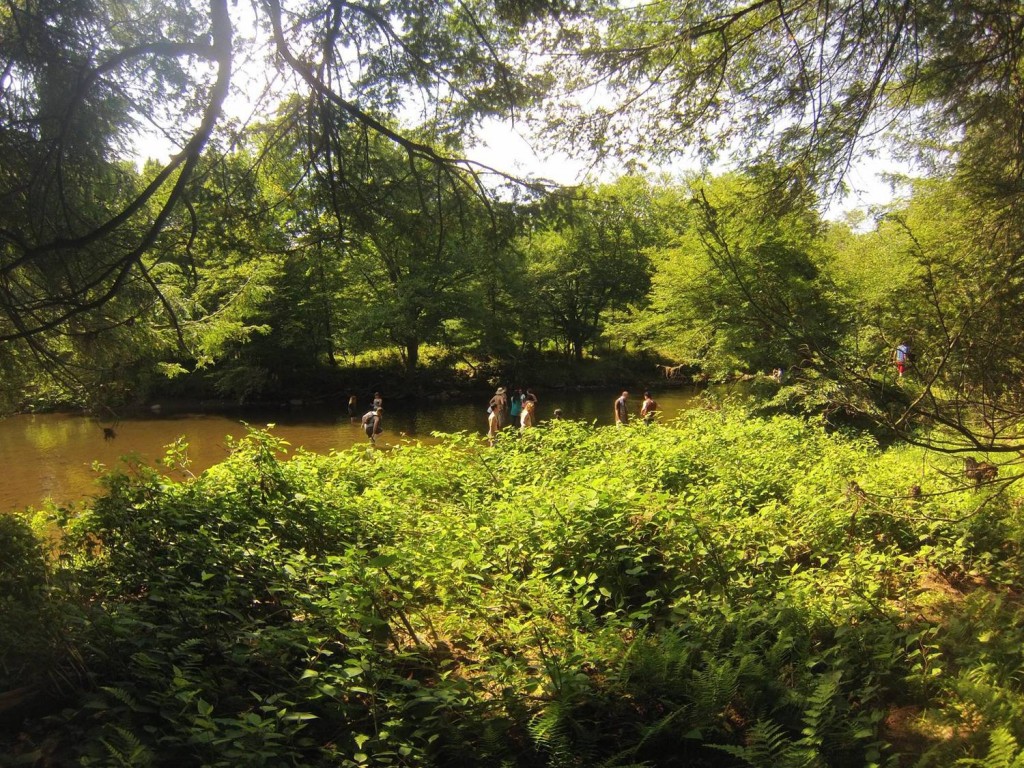 A peek at the creek Courtesy TheCampingTrip.net

No kidding. Ian looks like a hipster Viking from the Jewish Game of Thrones. His fiery red beard (which he only started growing in May of 2016) balances a black knit kippa, and tzitsis he rocks over his t-shirt and some Timbs. 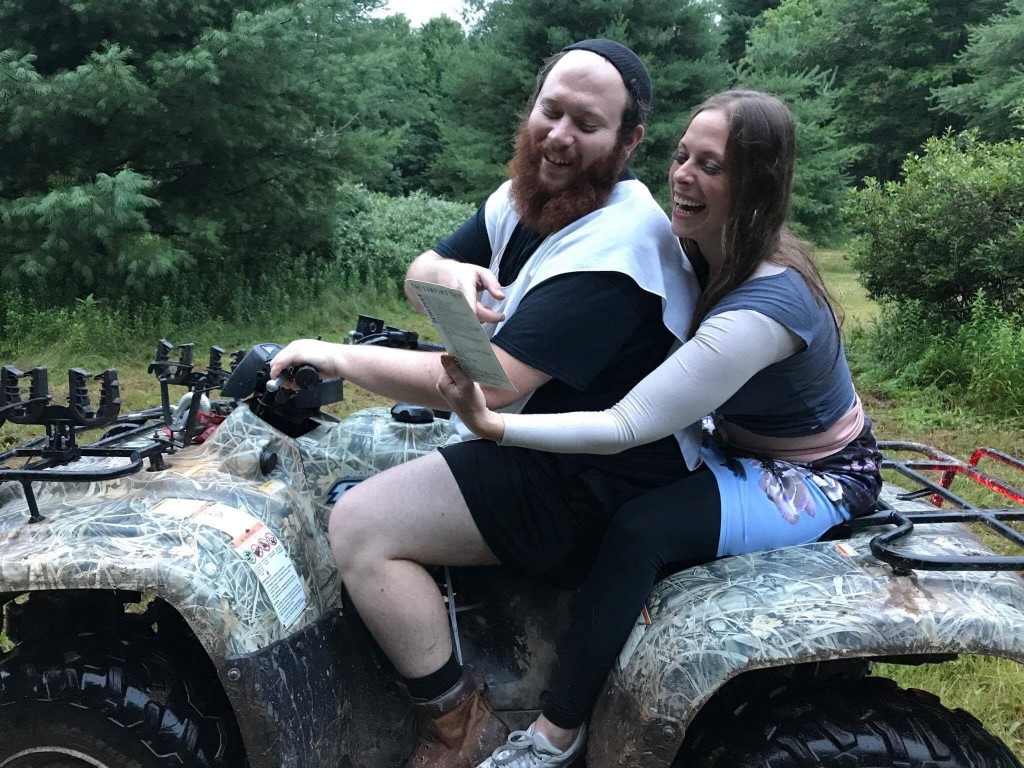 Ian Leiffer shows Ms. Shira “The Derech” path as they map out ways to ensure people won’t loose their way during Shabbos walks. Photo by Zmmrmnn

Ian continues: My father was 17 when he went to Woodstock. He use to jam with Velvert Turner who was Jimi Hendrix’s bassist.  I got to meet  Velvert and that was cool.  When I first told my Mom I wanted to make a festival on our land she thought I was nuts.  She doubted me… but then she said if you’re gonna do it, you have to make it Jewish. I took that to heart.  Woodstock was great because they were crying out about war and all these issues at the time. The Camping Trip is crying out about the barriers that separate people and separate Jewish people also in a big way.  There are so many walls that are between us that are keeping us from uniting, it’s ridiculous and it upsets me a lot, and it should upset everybody, and I’m going to tear those walls down,and I’m going to unite everybody… through fantastic live music and Shabbat.  It might take a little time, but I’m working on it.  I do have some plans for the future if Hashem will allow me to achieve those plans.”

Shira: Well that’s mighty ambitious of you  Did you grow up around lots of famous musicians and always dream of doing something big like this? Are there any artists you still can’t believe you’ve booked and who were some of your biggest influences?

Ian: Growing up I listened to oldies. A lot of Motown. My dad liked the Beatles a lot, Rolling Stones. I LOVED James Brown. Smokey Robinson. I’ve always had lofty goals. But I would say many times I’ve had the wrong intentions in doing them. Pigeons Playing Ping Pong was the first booking that I ever made other than the Sol Goodman band, G-Nome Project. Zusha is here for the third year. It’s like their resident festival.  I went to high school with Zecharia and Elisha and I’ve really gotten a chance to know them a lot more in depth over the last three years.  When you do business with somebody consistently, you learn for both of us we’re growing together.  Definatley Shlomo has been a positive influence in my life…seeing his kavana when he davins and Zack..seeing how they’ve all grown has been inspiration an to me”. 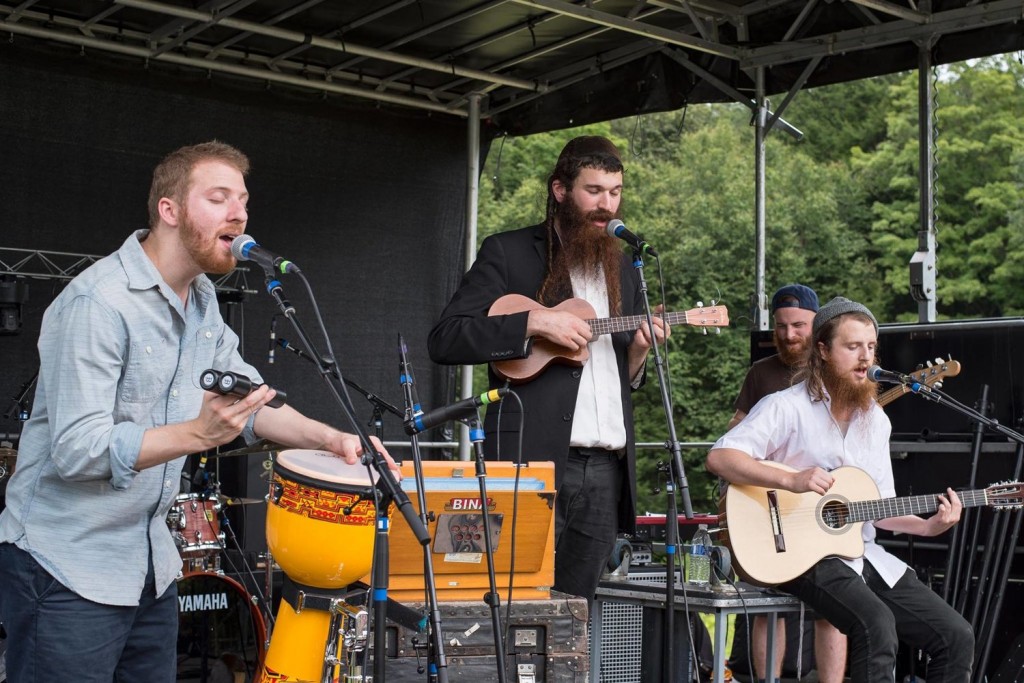 Even though Zusha has become one of the most beloved bands in Jewish music, they remain loyal joining their friends and fans from The  Camping Trip. Courtesy thecampingtrip.net

Shira:  When I run down the line up, many people have gotten really excited about Matisyahu.  But with raised eyebrows they say, “does he even keep Shabbos anymore?” I don’t know. “I’m not his rabbi” I say.  What  should you say to people like that?

Ian:  “In terms of having Matis, that is huge.  I’ve been trying to book Matis for three years and Hashem brought it together.  It was really the story of crazy Hashgacha Pratis.  Yehuda Solomon helped a lot in making that happen.  Look I love Matis.  I started beat boxing when I was 12 or 13 and like a year later this Chassidic guy comes out on Jimmy Kimmel and starts doing it and I thought yeah this guy is great, but I still think I can be better.  Listen, When you have 1.2 million followers on facebook and every Jewish person in the world knows who you are…you need some space sometimes, and I totally understand that plus your perception is through the roof because you have to encounter so many people who want so much from you.   Jewish people in general wants to do chesed,  and Matis is THAT guy.  You can’t even realize.. all that he does for chesed and I think it’s a shame that people go around and talk about he cut his hair and his beard.  So what?!  Everybody’s on their own path and Matis is on his path and no one can image the stress he went through blowing up and having so much fame.   Having all these forces coming at him that he probably had to deal with.  That is NOT an easy thing to deal with. I have maybe experienced it on some level maybe like .1% on the scale of that, and it’s STILL been overwhelming”. 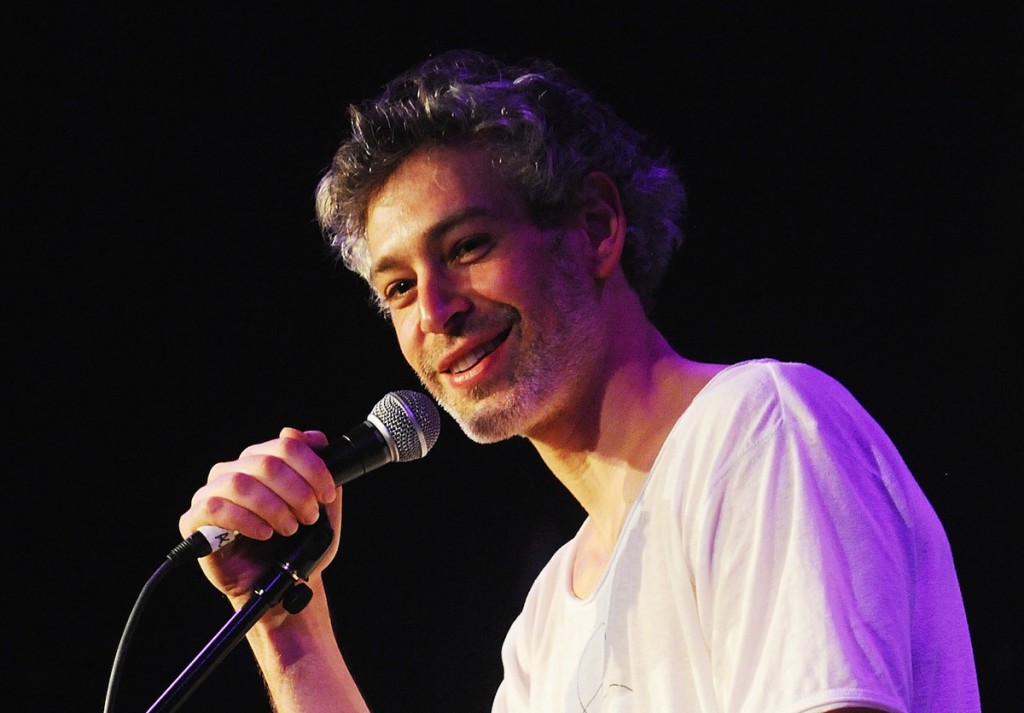 Shira:  You’ve got the top Jewish performers in the world, many of whom are known to be holding on very High religious observance levels endorcing and coming for Shabbos.   At the same time there may be some people who are not keeping on the same halachic level as others and don’t want to feel judged or spoken about negatively. What are some of the challenges you face in creating a space that is able to host hundreds of different people on a wide range of levels?

Ian:  “We had to build a 68 feet eruv around the.  when the guy came to put it up he said it was the largest eruv in the Catskills.  Also we have a Sefer Torah for layning on Shabbos.    We provide Glatt Kosher catering option for people who want to take advantage of that. We have non Jewish help that comes and puts wood in the fires.  We have hot showers, we have EMS on site, private security on site, Hatzalah on standby, everybody is looking out for each other because we are a family.  The one big problem in the past year was that I myself was not Shomer Shabbat…and now I am”. 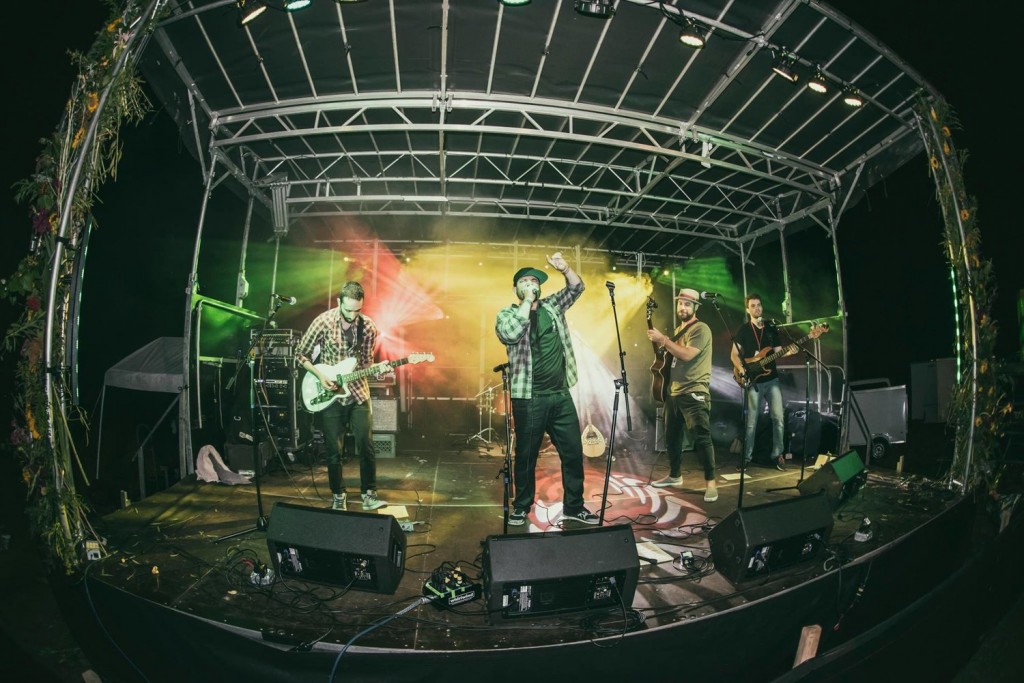 Shira:  Ian I am so impressed with not only how much this festival has grown, but how producing it inspired you to grow too.  Thank you for inviting me back this year as a performer.   I can honestly say I witnessed people connecting to their Jewish roots on your land.  Count me in.

Ian:  I’m not gonna trip out on anyone else’s vibes but  we’re really trying to encourage people to keep Shabbat in public this year, and that is something I’ve never done before.   Ideally we’d like to have up to 1800 people.”

Shira:   I have no doubt you’ll get there.  But you said you were the only Jew growing up in Jeffersonville.  You don’t think if we all roll up the town might get nervous?  Isn’t there some kind of state limit to how big this thing can get? 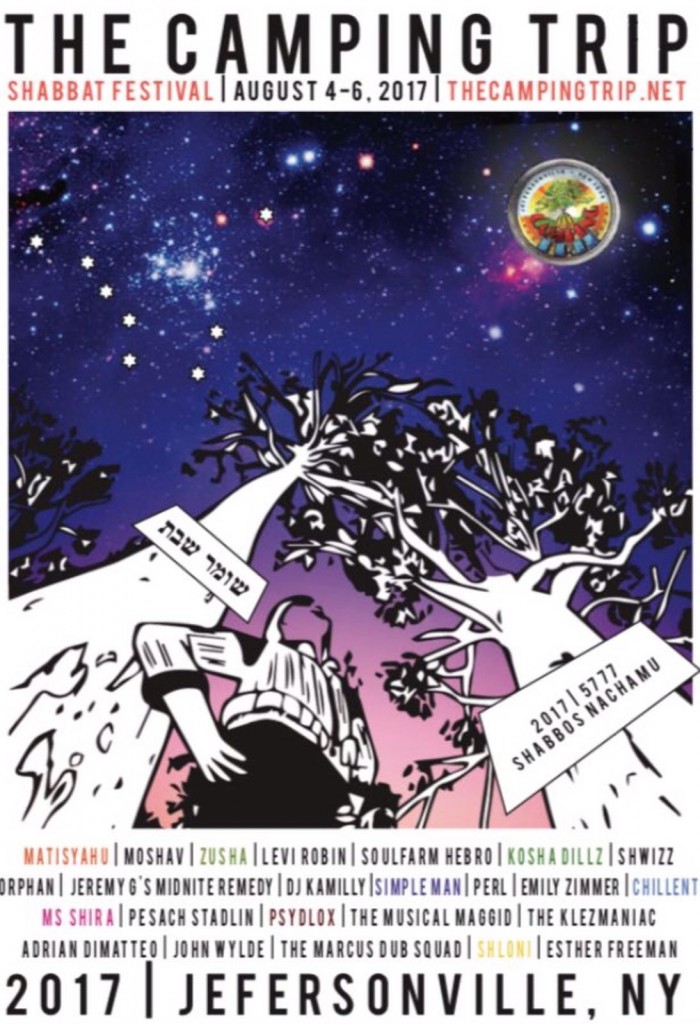 About the Author
Shira, a feisty little Zionist from New York, miraculously made aliyah and lives to tell the tale. At the age of 4, her Israeli gannet Mrs. Taylor wrote on her evaluation report, "left alone Shira will rule the world." She grew up to be a social activist, singer, writer, teacher, and mitzvah girl. She advocates for aliyah and empowers hundreds of olim weekly by hosting in Tel Aviv. Shira is the reigning "Shabbas Queen" in the Guinness World Records Largest Shabbat Dinner.
Comments