Last night I had the pleasure and privilege of attending the annual break-the-fast iftar dinner during Ramadan with Muslims and Jews from all over Israel at the residence of President Ruby Rivlin. I discovered that for the past 12 years this annual event has been taking place at the president’s residence and it has become a well-regarded and respected tradition.

During the term of the current president (since July 2014), it has become an especially meaningful event, since Palestinian Arab leadership of Israel and President Rivlin have developed very good working relations based on mutual respect.  This is due in no small measure to the consistent moral voice that has been raised by President Rivlin on almost every possible occasion against racism and hate crimes and for equality and fair treatment of the Arab minority in Israel.

I was honored to be one of the people to shake President Rivlin’s hand as he entered the garden at his residence where the dinner took place with a big smile and a warm greeting for everyone. This was not the first time I had met him. I had also met him and shook his hand at demonstrations against hate crimes and racism in Israel, including one in front of his residence a few years ago, organized by the Tag Meir Forum, on whose board I served for several years.

This year’s event, however, was held in the shadow of the growing problem of unchecked violence in the Arab communities of Israel, especially in the light of the police shooting of an innocent Palestinian Arab of Israeli citizenship in Kafr Kassem a week ago (on June 5th), which sparked riots in that town in the center of Israel and led to a one day strike in all towns and villages in the Arab sector a few days later.

In his cordial remarks to the mostly Muslim audience last night, President Rivlin did not shrink from his responsibility to address this issue. Indeed, he expressed empathy with the plague of violence in the Arab communities in Israel, and delineated carefully and constructively the need for cooperation between the Arab leaders, the police and the government. In fact, in order to move forward quickly on this issue, he announced that he will soon host a meeting of the heads of the police and leaders of the Arab community of Israel at his residence to coordinate cooperation on combatting this disastrous situation.

In addition to the warmth and sensitivity in his remarks, it is important to note that he began and ended his speech in Arabic. This was well-received by all the Palestinian Arabs in the audience, who represented many fields of endeavor including politics, academia, health, community organizations, and religious leaders (imams and kadis).

The second main speaker at this event was Kadi Abd Al-Hakim Samara, currently the President of the Shari’a courts of the state of Israel (Israel is the only Western country which has shari’a courts for family matters as part of its judicial system!). I have known Kadi Samara for many years, since he participated in a dialogue group of Israeli rabbis, with Muslim and Christian religious leaders, called Kedem (Kol Dati Mefayeis—Voices for Religious Reconciliation) which ran for 5 years (from 2003-2008), sponsored by my former organization, the Interreligious Coordinating Council in Israel. It was the longest lasting and most intensive interreligious dialogue experience to have ever taken place in Israel, and throughout the process, Kadi Samara was always the outstanding moral spokesman for the Muslim group. 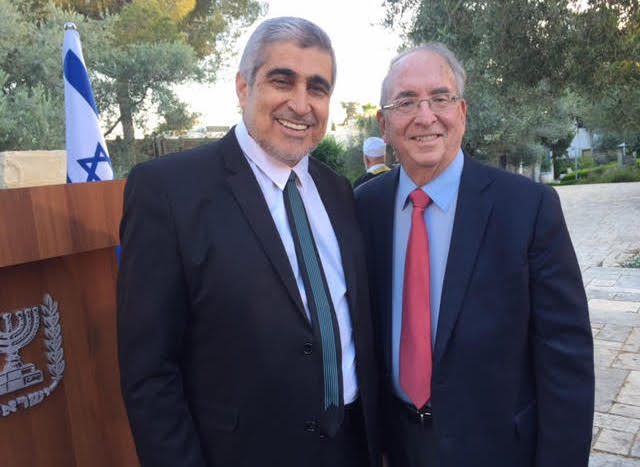 Last night, he once again raised his moral voice in a clear and concise manner. In his brief remarks at the dinner, he spoke directly to President Rivlin about the urgent need to deal with personal security for the Palestinian Arabs who are citizens of Israel, who make up 21% of the population. Last year alone, 60 Palestinian Arab citizens were killed in violence in Arab communities in Israel. “The gangs are running wild”, he said, “and they are dealing in drugs, guns and women. However, the Israel law enforcement authorities are not dealing with this sufficiently. The people are losing trust in the police, and young Israeli Arabs are now beginning to defend themselves with weapons. This is very dangerous”, he said. Kadi Samara implored President Rivlin to do whatever he can to catalyze the relevant arms of the Israel government and law enforcement authorities to combat this problem seriously and sensitively  without delay.

But Kadi Samara did not stop there. Addressing his fellow Muslim citizens of Israel, he went on to say: “We have to stop only complaining. We have to do things ourselves as well, like educating according to the basic humanistic values which are in our Islamic tradition.”  This statement was important, not just for the Muslims at the event, but also for the Jewish ones. It revealed a keen sense of pragmatism along with a clear moral and public agenda.

It was good to break bread together with the President of Israel and many of the leading religious, communal and educational personalities of the Muslim community in Israel. I felt that it was an inspiring and important experience.

My hope is that the ethical and public commitments expressed by the President of Israel and the President of the Shari’a Courts of Israel are more than just good speeches for public consumption. It would be great if they can be translated into concrete action programs for the betterment of all citizens of Israel. The issue of the plague of violence within the Arab communities  can no longer be ignored and swept under the carpet.