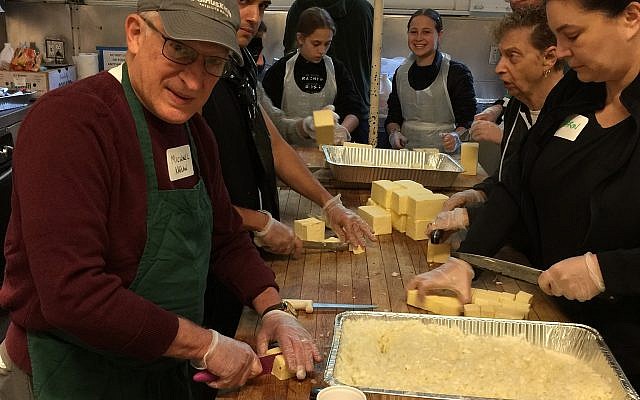 For the past 33 years, my synagogue, Temple Israel of Hollywood, has served a full Christmas Dinner to the poor and homeless of Hollywood. We distributed this year toys, children’s books, hygiene products, blankets, and sox to more than 1,000 people. We began the project in the mid-1980s to relieve our Christian brothers and sisters of the responsibility of helping the people in their neighborhood so they could celebrate their holiday with their communities and families.

The Hollywood United Methodist Church has graciously offered their facility at Highland and Franklin (a block north of the famed Hollywood-Highland Center and Academy Award Theater) these past 28 years. This year Temple Israel co-sponsored this effort with the Church and with the ILM (Intellect, Love, and Mercy) Foundation which has roots in Islam. Umar Hakim (the ILM Director) and the Reverend Cathy Cooper Ledesma (HUMC’s Senior Pastor) joined me as “siblings in faith” from the three great monotheistic traditions of Judaism, Christianity and Islam.

This was the largest interfaith Christmas Dinner in Los Angeles County.

Volunteers served over 100 roasted turkeys with stuffing, mashed potatoes, vegetables, cranberry sauce, and a number of desserts. Retirees, homeless, working families with young children, and other hungry and needy individuals and families came to eat and enjoy their holiday.

Our congregation (Temple Israel of Hollywood) signed a Brit Olam, “a covenant with our world,” via the Reform movement’s Religious Action Center in Washington, D.C. to address the epidemic problem of food insecurity (40 million people in America) who do not know from where and when their next meal is coming. The problem of hunger is particularly acute in the closing days of each month as discretionary income dissipates and SNAP federal government food subsidies are used up. The number of homeless individuals in Los Angeles (though down 4% this year due to an aggressive effort by Los Angeles Mayor Eric Garcetti to house homeless individuals) hovers around 45,000 people of whom one-third are children.

Shelter Partnership provided us with blankets, hygiene products, toys and socks. NBC Universal and Big Sunday provided toys. The Book Foundation provided 250 contemporary books for children. Big Sunday (originally a project of Temple Israel and now its own 501C3 non-profit organization serving the greater Los Angeles area 365 days a year) connected us with a number of non-profit organizations to get the word out to the community that this dinner welcomed everyone.

Nearly 300 volunteers worked for more than three months preparing for the culminating on Christmas Day.

I was asked by the media at the event why we Jews were doing this. I told them two things in addition to relieving our Christian friends of the moral duty to care for the hungry and “the least of these” on their holiday; first, there is the dire challenge of hunger that we have to address  in projects like this and in advocating public policy changes in local, state and national government to alleviate hunger, and second, this co-sponsored dinner is a powerful response to the toxicity and polarization that has infected America in the last several years since President Trump began his presidential campaign of division and hostility pitting one group against another to inspire fear and hate for his political purposes.

Good people, I said, can bridge differences, reach across divisions in class, race, ethnicity, religion, and national origins, reaffirm the oneness of humankind and the principle that we are accountable to and responsible for each other, that walls should be torn down and paths forward together be forged.

That is what we did together this week. One interviewer asked me if this was a reflection of the spirit of this season. I responded “yes” but also that this is what we  ought to be doing 365 days a year.