The great festival of Purim celebrates how the Jews of Persia were saved from the wicked Haman some 2, 500 years ago, but Jewish communities have had their own local festivities to mark their miraculous deliverance from catastrophe.

On November 8, 1942 (Operation Torch), American and British forces invaded Vichy- occupied Morocco and Algeria. It took the Allies just eight days to defeat the  Vichy French partners of the Nazis.

‘Megillat Hitler’ commissioned to mark the wartime liberation of the Jews of Casablanca. 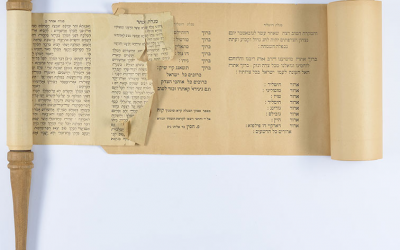 The Jews saw the Allied conquest as a miracle. The Vichy regime had stripped some 330,000 Jews of their civil rights, imposed quotas,  restricted their entrance to schools and some professions and forced them back into the Jewish ghettos.

The Jewish community of Casablanca commissioned a scribe called P. Hassine to write a  special commemorative scroll called ‘Megillat Hitler.’ The scroll is now on display at the US Holocaust Museum in Washington DC.

Written in Hebrew, its text echoes the original Scroll of Esther. It describes the rise of “Hitler the painter,” who rose to become the ruler of all of Germany, and who took the advice of his chamberlain Himmler to destroy the Jews.

P. Hasine, a Hebrew teacher from Casablanca, tells how Hitler’s plan to deport the Jews of North Africa was foiled at the last minute by the decision of President Roosevelt, “who could not sleep,” and so “commanded that these states be rescued and given protection.” Thus the Jews “went from mourning into happiness because the Americans established their rule.” The scroll declares that every year,“we are obligated to establish this day of rescue,” a “fixed and grand festival”.

But the Casablanca Jews rejoiced too soon:  At the same time as Operation Torch,   the Nazis retreated to Tunisia and imposed direct control: thousands of Jewish men were marched to forced labour camps. It would take the Allies another year before the Jews of North Africa would have their rights restored to them.

What happened to the Jews of Djerba  during the six months of Nazi occupation during World War II? Isolated on their island in the farthest corner of eastern Tunisia,  the Jews of that community appear to have been spared the round-ups resulting in males between the ages of 16 and 60 being sent to do forced labour.

But one incident does stick in the collective memory. At the time of the reading of the parasha of Terumah, the Nazis sent out instructions that the Jews of Djerba should immediately give them 50 kg of gold.

The deeply religious Jews of Djerba had just read the verse: “God instructed Moses to tell all Israelites whose heart so moved them to bring gifts of gold.”

On that Shabbat, the residents knew that something was seriously amiss when the chief rabbi of the island drove around in his car collecting the gold. He did not manage to fill the quota of 50 kilos.

But retribution did not come. The occupation was on its last legs. The Nazis never returned to the island of Djerba  and two months later, in May 1943, the Allies re-conquered Tunisia. And so the Jews of Djerba, too,  mark their own mini-Purim.

More Purim celebrations
About the Author
Lyn Julius is a journalist and co-founder of Harif, an association of Jews from the Middle East and North Africa in the UK. She is the author of 'Uprooted: How 3,000 years of Jewish Civilisation in the Arab world vanished overnight.' (Vallentine Mitchell)
Comments