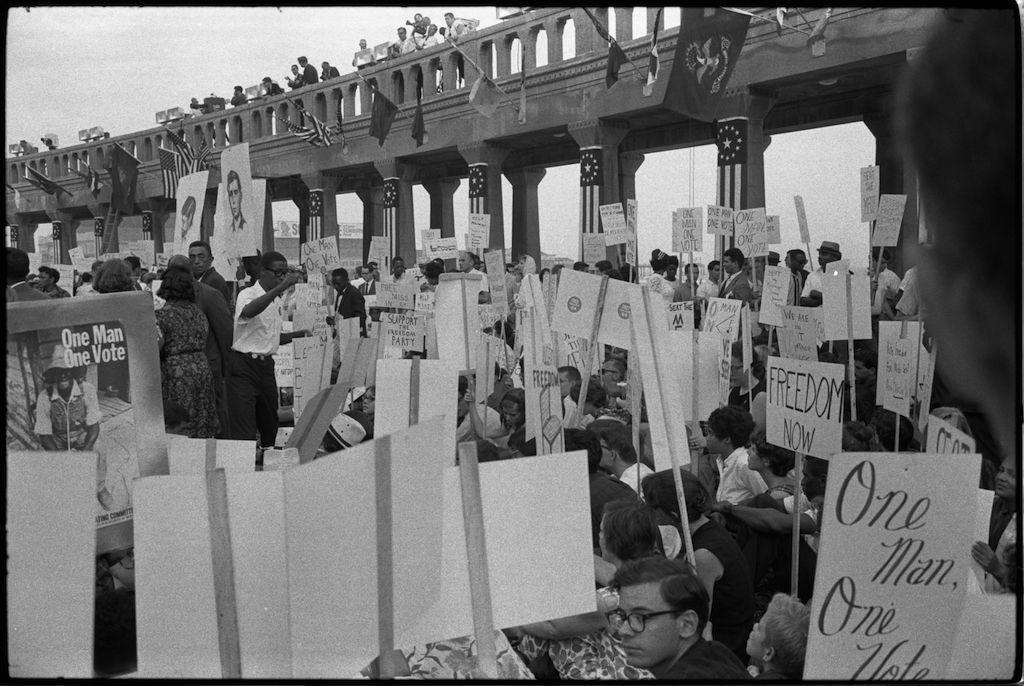 NEW YORK (JTA) — Andrew Goodman and Michael Schwerner are about the closest American Jews have to secular saints. The two Jewish civil rights workers traveled south for the Freedom Summer campaign of 1964, joining the African-American activist James Chaney in canvassing black churches. All three were kidnapped and murdered by a lynch mob.

Forty-three years ago next Friday, Aug. 4, their bullet-riddled bodies were found buried in a dam near Philadelphia, Mississippi, 44 days after their disappearance.

The hagiographies of the two Jewish men, both in their 20s, sometimes overlook the specific purpose of their trip to the Jim Crow South: registering African-Americans in Mississippi to vote. Freedom Summer was meant to directly confront efforts, legal and otherwise, to prevent blacks from voting: poll taxes and literacy tests, fear and intimidation, and as Goodman, Schwerner and Cheney found out, beatings and lynchings.

As the Congress of Racial Equality, or CORE, described the mission, “the inability to vote was only one of many problems blacks encountered in the racist society around them, but the civil-rights officials who decided to zero in on voter registration understood its crucial significance as well the white supremacists did. An African American voting bloc would be able to effect social and political change.”

It was the unfinished business of Goodman, Schwerner and Chaney that animated 24 faith groups, 17 of them Jewish, to write a letter to Congress urging lawmakers not to fund the Presidential Advisory Commission on Election Integrity — the Orwellian name for President Donald Trump’s effort to hunt down those 3 million illegal ballots that he claims illicitly cost him the popular vote. That’s Trump’s agenda, anyway. Kansas Secretary of State Kris Kobach and other commission members say they merely want to gauge the extent of the problem and propose remedies.

Kobach has already signaled the kinds of remedies he has in mind: imposing strict voter identification laws; removing names from voter rolls perhaps using inaccurate or unreliable databases; identifying potential duplicate registration records that use a notoriously misleading instrument; or just failing to enforce existing laws that have expanded individuals’ right to vote.

Sure, such remedies might end up suppressing the votes of poor people, blacks, Hispanics, the elderly (and, what do you know, Democrats) — in fact, nearly all reliable studies and multiple court cases say they will. But, according to Kobach and company, that’s the price to be paid for, well, integrity.

The voting commission is a solution in search of a problem. Voting by non-citizens is vanishingly rare. Trump’s claims of widespread voter fraud during the 2016 elections were “baseless,” as the faith coalition notes. There are no reputable studies to suggest that U.S. elections have been compromised by fraudulent voting by undocumented immigrants, felons, double voters or dead voters. Even the conservative Heritage Foundation, which maintains a Voter Fraud Databaseit says shows “incontrovertible” evidence that “voter fraud is a real and pressing issue,” lists only 1,071 instances of voter fraud — going back to 1981. Americans have cast over 1 billion votes during that period in presidential elections alone.

Rather than pointing to evidence that suggests otherwise — because it can’t — the administration offers something else: doubt. “We may never know” if Hillary Clinton won the popular vote in the 2016 election, Kobach told MSNBC. Responding to reports that more than 40 states rejected intrusive requests for massive amounts of data on its voters, Trump said this month, “If any state does not want to share this information, one has to wonder what they’re worried about.”

The assumption of the commission is that voter fraud is real and widespread; the onus is on everyone else to prove it isn’t.

Late-night comics giggle at Trump’s propensity for creating alternative realities, whether it was his campaign claim that America was experiencing an unprecedented crime wave or this week’s tweets saying that transgender service members are a financial drain on the military. Fitting this pattern is his and his team’s ongoing refusal to accept the conclusion by the top four intelligence agencies that Russian interference in the 2016 election was real and significant. On Monday, top presidential adviser Jared Kushner emerged from his testimony before the Senate Intelligence Committee to declare that accusations of Russian meddling and administration collusion with the Russians are an insult to Trump’s voters.

“Donald Trump had a better message and ran a smarter campaign, and that is why he won,” Kushner said. “Suggesting otherwise ridicules those who voted for him.”

In other words: No matter what the CIA, FBI and National Security Council tell us, Russian interference in the presidential election is a non-issue. But the unfounded reports of voter fraud are worth a federally funded commission.

Unlike the talk show hosts, civil rights activists and other fans of representative democracy aren’t laughing.

“Taxpayer funds should go towards efforts to encourage voter participation,” the faith coalition said in its letter, “rather than a commission intended to restrict voting rights.”

Some have memories of how hard Jews fought alongside blacks to secure voting rights. Others believe, as the coalition put it, that their religion teaches them to work for a society that “safeguards the rights of all people – especially the sacred right to vote.”

The NAACP Legal Defense and Educational Fund has filed a federal lawsuit calling the president’s election commission a pretext for the suppression of black and Latino voters.

Obviously this is a calamity for Democrats, who already are seeing evidence that laws making it harder to vote are having a disproportionate effect on their constituents. But this should also be an issue for Jews who support the president and wish he would get on with the business of addressing actual problems, from infrastructure to job creation to regulatory overreach.

There’s been a debate over the years about whether or not Goodman and Schwerner were part of the “Jewish” story. At a big Jewish conference a number of years ago, I heard the head of what is now the Jewish Council for Public Affairs declare, “When Goodman and Schwerner went south for Freedom Summer, they were ‘doing Jewish!'” Others questioned then, and still question today, why so many Jewish activists pursue universalist causes in the name of “tikkun olam” rather than working on issues that will specifically benefit Israel or their fellow Jews.

Goodman and Schwerner were of a generation that did not distinguish between policies that were good for “them” and those that were good for “us.” Jews were only just emerging from decades in which discrimination against them was both legal and tolerated. They knew that rights won slowly could be taken away quickly, and that if any minority was at risk, then all minorities were at risk.

The organizations that backed Freedom Summer understood the power of coalitions in pursuing their own particularist agendas. You can call it enlightened self-interest, but maybe that’s just another name for tikkun olam.