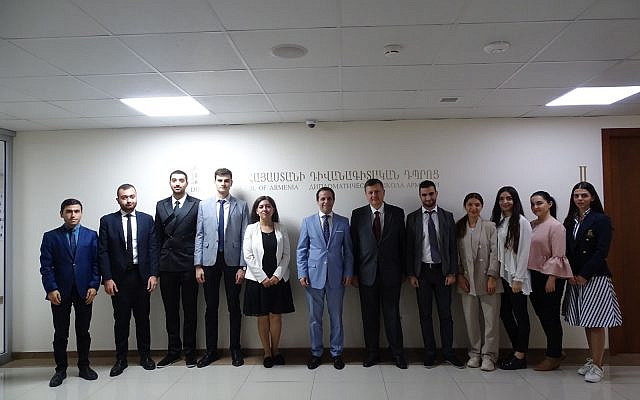 YEREVAN, OCTOBER 6 AND 7, 2022 . Within the context of a regional UPEACE mission to the South Caucasus countries, Dr. David Fernandez Puyana, Ambassador, Permanent Observer of the University for Peace to the United Nations Office and other International Organizations in Geneva, maintained high level meetings in both the Ministry of Foreign Affairs and the Ministry of Education of the Republic of Armenia. The visit to Armenia was organized by the Diplomatic School of Armenia.

On 6 October a meeting was held with Mr. Artak Papoyan, Head of the Department for Foreign Relations and Diaspora of MESCS at the Ministry of Education, Science, Culture and Sports in order to extend the cooperation with the Armenian universities. UPEACE offered to the academic community of Armenia a wide range of higher education studies in the field of peace and security, international and environment law, diplomacy or human rights.

On 7 October a lecture on the role of education in maintaining peace and protecting human rights took place at the Diplomatic School of Armenia. Based on the agreement of cooperation signed between UPEACE and the Diplomatic School of Armenia, this joint activity was a follow-up of the successful first ever training on human rights in the multilateral level, which was organized for Armenian diplomats on May 23 and 24, 2022, at the United Nations Office in Geneva. Both institutions agreed to reinforce their partnership.

Later a meeting was held with Ms. Karine Sujuyan, Head of the Department of Human Rights and Humanitarian Issues at the Ministry of Foreign Affairs, with the purpose of exploring further cooperation in the field of multilateralism, peace and human rights.

Throughout the visit Ambassador Puyana had meetings with Ambassador Vahe Gabrielyan, Director of the Diplomatic School to discuss further implementation of the Memorandum of Understanding signed between the parties and to extend the scope of activities by embracing new ideas and initiatives of cooperation aimed at education for peace and human rights.