My maternal grandfather was declared a Rescuer of the Jews by the Lithuanian Genocide Resistance and Research Centre. This division is funded by the Lithuanian government, dedicated to establishing and enforcing the legal and official historical narrative of the nation.

The context of the pronouncement was the impending launch of my memoir The Nazi’s Granddaughter: How I Discovered My Grandfather Was a War Criminal. Reluctantly, I had come to the horrific conclusion that my grandfather, Jonas Noreika, was involved in the murder of 8,000 – 15,000 Jews in Lithuania. The book launch in March 2021 coincided with multiple lawsuits against the government of Lithuania, accusing them of Holocaust fraud; these were filed by Grant Gochin, the descendant of some of my grandfather’s victims.

A single testimony, given by the Lithuanian priest, Father Jonas Borevičius, was the well from which this decree about my grandfather was drawn. His deposition was given 40 years after the Holocaust in a court in Chicago.

In July 1944, my grandmother and mother fled Lithuania. They were unable to obtain visas to the United States. They were diverted to Buenos Aires, Argentina, where they lived for seven years, until they could find an American sponsor. According to my father, Father Borevičius became that immigration sponsor.

I was not surprised that Father Borevičius was enlisted posthumously in 2019 by the government of Lithuania to support my grandfather. The denial among many Lithuanians is so strong, that they will grasp at anything to assure themselves that not a single Lithuanian can be accused of murdering Jews, that it was all done by the Nazis.

Many Lithuanians fled westward as the Russians approached in 1944. My grandmother and mother were among them. In their new habitat, displaced Lithuanians formed ethnic enclaves and tight-knit immigrant communities. If a Lithuanian was accused of participating in the Holocaust in a US court, Lithuanians testified for each other. Of course, there were almost no Jewish survivors to contradict the Lithuanian testimony. It was not surprising then that Father Borevičius gave unsolicited support to my grandfather in his testimony.

During that period in Lithuania, Jews were murdered wantonly and publicly. Whatever Jewish property that was not burned or destroyed was stolen, shared, and even publicly auctioned. In a ghoulish twist, festivals were often held following slaughter sprees. The drop in population directly due to the genocide of the Lithuanian Jews was glaringly obvious. There was no possibility that anyone could have been unaware of the public slaughter of their neighboring Jews. Borevičius testified that he had lived in the very center of the town of Šiauliai, yet claimed no knowledge of pogroms in his town.

On June 30, 1941, 1,000 Jews were murdered nearby. As a leading citizen and living in the center of the town, Father Borevičius testified under oath that he was unaware of these events. Father testified repeatedly in his defense of Virkutis, that during the three years of his pastoral visits to the prison where Jews and others were held that he never witnessed harsh treatment of Jewish prisoners. He claimed never to have heard complaints about the prison’s administration. He also vowed that he saw no violence within the prison. He swore that he did not see, hear, or have any knowledge of the Jewish prisoners dying of starvation, typhus or maltreatment. Nor did he have any knowledge of Russian prisoners of war kept in the Šiauliai prison.

Father Borevičius testified that he was well informed about Jewish life in Šiauliai, yet he knew nothing about 13,000 Jews murdered outside Šiauliai in July 1941.

The unimaginably cruel mass butchery of Jewish children (“Children’s Aktion”) that took place in his town in July 1943 was also beyond his awareness.

Father Borevičius then claimed out of the blue that my grandfather, Jonas Noreika, had wanted to help Jews. In an unsolicited statement, Father Borevičius said Lithuanians were anti-Nazi, but not anti-Jewish.

In Šiauliai and other areas of Lithuania, local murderers wore white armbands to identify themselves to the German Nazis as willing collaborators set on a mission to kill Jews. A white armband, to a Jew, signified death. Lithuanians wore their white armbands publicly and pervasively. When questioned about the white armbands, Father Borevičius feigned surprise, saying: “No, what is that white arm band? Is that some special organization?”

Father Borevičius also testified, “Jews were all the way privileged people in Lithuania.” Growing up in Chicago, I have heard many Lithuanians say this, and the statement is true until World War II. But for a Lithuanian to declare this after World War II–when 96.4 percent of Jews were murdered, the highest percentage in all of Europe—shows an utter lack of awareness and empathy for what happened to the Jews. A Lithuanian needs to understand that if you were a Jew in Lithuania, you had 3 percent chance of surviving. The odds were staggering and frightening, and Jews at that time certainly did not feel privileged.

Father Borevičius claimed he saw nothing, heard nothing, knew nothing, and was unaware of the slaughter of Jews. At the same time, however, he claimed that he and my grandfather rescued Jews. This begs the question, how could he have been a rescuer of Jews without knowing why Jews needed rescuing?

The legal questioners of the deposition did not pursue further questions about Noreika because he was not on trial. They knew nothing about Noreika prior to the deposition and probably wondered why his name was even brought up during the trial of Antanas Virkutis. Father Borevičius’s statements about my grandfather were unsolicited and rather random. The deposition transcript is 153 pages. My grandfather is mentioned in three of those pages.

Solely with this uncorroborated and random testimony of three pages given 40 years after the Holocaust, the government of Lithuania, with the backing of its courts, has declared my grandfather Jonas Noreika a rescuer of Jews. Similarly, the government of Lithuania has also declared Father Borevičius a rescuer of Jews. Unfortunately, Yad Vashem has not been able to corroborate either of these rescuers.

Legitimate historians expressed outrage at the government’s decree. The initial reaction to the rescuer manifesto by the Genocide Center was immediate and vociferous. The director of the Lithuanian History Institute, Alvydas Nikžentaitis rejected these findings, stating that they were “unreliable.”

The “historian”–on behalf of the government of Lithuania–who discovered this transcript in which Father Borevicius claimed my grandfather rescued Jews is not actually a historian. He is a geologist, hired by the government as a public relations specialist to determine the “truth” about the history of Lithuania.

With no other recourse available to set the record straight, Grant Gochin again sued the government, all the way up through their Lithuanian Supreme Court. Unsurprisingly, these courts ruled in favor of the government. This made my grandfather’s falsified and imaginary rescue of Jews into a formal, irrevocable statement of fact.

Grant Gochin has also appealed for the revocation of state honors awarded to my grandfather, to:

The government of Lithuania

All courts in Lithuania

Ombudsman of the Lithuanian Parliament

Below is an educational pamphlet, which the government distributes. It certifies my grandfather as a rescuer of Jews. This certification is used as a government document for worldwide Holocaust education. It is conceivable that this sort of information could enter the U.S. education system as a Holocaust fact.

The Lithuanian people have been indoctrinated to believe that my grandfather is a hero and a rescuer of Jews. The Genocide Center says so. The Lithuanian courts say so.

A glimmer of hope is that in February, my memoir will be released in Lithuania, which may open up the discussion of Lithuania’s role in the Holocaust that has heretofore not been possible. 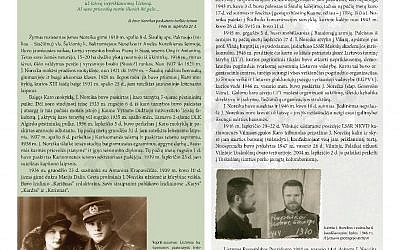 Author document
About the Author
Silvia Foti, MSJ, MAT, MFA, is a journalist, creative writer, teacher, and mother. She is author of the book The Nazi's Granddaughter: How I Learned My Grandfather was a War Criminal, Regnery History; Mi Abuelo: El General Storm ¿Héroe o criminal nazi? Harper Collins Mexico. The book is also being translated into Lithuanian, Hungarian, and Polish.
Related Topics
Related Posts
Comments