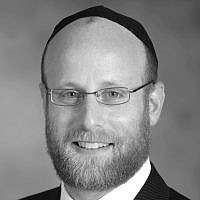 The Blogs
Baruch Bebchick
Apply for a Blog
Please note that the posts on The Blogs are contributed by third parties. The opinions, facts and any media content in them are presented solely by the authors, and neither The Times of Israel nor its partners assume any responsibility for them. Please contact us in case of abuse. In case of abuse,
Report this post.

While I have disagreed with many articles written by TOI authors on the subject of Charedim, TOI should be credited with its efforts to promote viewpoint diversity and intellectual honesty in enabling a variety of authors to publish views that are contrary to positions taken by TOI editors.

Unfortunately, the Jerusalem Post evidently prefers to broadcast only its own partisan views and not subject its fragile positions to public scrutiny.

I have a broad perspective from which to address the various erroneous arguments and baseless conclusions proffered by the Jpost’s editorial because unlike the members of the Jpost Editorial Board, I have successfully bridged both the Charedi and secular worlds.  First by having volunteered to serve as a lone soldier in an IDF combat unit (with time spent in the Lebanese security zone and the administered territories) as well as many years of reserve duty.  And I also have spent many years learning in yeshiva and continue to learn Torah in Kollel each morning.  These credentials alone make me more qualified than the Jpost Editorial Board to opine on the subject of the Charedi draft, and from a more objective viewpoint — unlike the obviously anti-Charedi perspectives the Jpost espouses.

There are too many inaccuracies in the one short Jpost editorial to correct here, so I will focus only on a few of the most egregious points.  While I have no problem with the Jpost Editorial Board taking a stance on a wide array of issues, reaching conclusions about the Charedim out of ignorance just perpetuates the divisions fracturing our society. I would much prefer to see the Jpost use its platform to try and build bridges rather than so unfairly leap on the bandwagon of castigating the Charedim for its own purposes.

The Jpost Editorial Board contradicts itself throughout its editorial, and sometimes even in consecutive sentences.  It starts by trying to mask its obvious bias by claiming: “We do not detract from the value of studying Torah. It is valuable and important.”  But in the very next sentence, the Jpost Editorial Board concludes that “studying in yeshiva does not exempt someone from contributing to society” — thereby making clear its twisted conclusion that yeshiva study does not contribute to the welfare of the State.

Just as it is impossible to convince a flat-earther that the world indeed is round, it is hopeless to describe the value of Torah learning (for the entire Jewish people, especially those residing in Israel) to someone who does not appreciate the value of spiritual power.  What I can tell you is that from my perspective, both are critical to the welfare and continued existence of the Jewish State.  Without a strong army, we are physically vulnerable, and without Torah, we are spiritually vulnerable and devoid of any meaningful existence. Given the current state of affairs, our protection depends on both. I did not make Aliyah to live in another Middle Eastern country that has no Jewish character, and unfortunately given the startling rates of assimilation and intermarriage, Jews without Torah (even here in Israel) would very quickly become indistinguishable from our non-Jewish neighbors.

Another point that should be mentioned is that the army has consistently demonstrated its lack of desire to integrate large numbers of Charedim into its ranks. The army is not prepared for, nor does it want, a mass influx of Charedim.  To do so would require major changes in infrastructure which do not comport with the current needs of the IDF for a more downsized and specialized army.  Just the issue of kashrus alone (I spent many a milium eating my own cold food since part of the “chevre” were cooking pork using army utensils) is a non-negotiable issue that would need to be fixed (to be fair, I have also experienced the other extreme, where an anti-religious kibbutznik yelled at another secular soldier for setting a meat fork with a diary table setting). But to effectively absorb large numbers of Charedim into the army, the list of needed changes would be long and complicated.

So what about a more balanced proposal, and one that does not solely throw the Charedim under the bus without also calling out other members of Israeli society for the need to improve?  Why not suggest that every Charedi (who really is not learning full-time) take part in some form of the army or national service and that every secular Jew be similarly obligated to engage in Torah study so as to learn the beauty of our Jewish heritage and contribute to the spiritual fortification of the Jewish people?

Instead of trying to bridge gaps, the Jpost Editorial Board demonstrated the same shallow thinking and empty talking points bandied about by politicians. More should be expected by what arguably is a leading English daily publication in Israel unless its goal was really to preach to its own readership in an effort to increase subscribership (of which Charedim obviously are a tiny minority).

About the Author
Baruch Bebchick lives in Ramat Beit Shemesh with his wife and children. He learns in Kollel each morning and in the afternoons/evenings works as a US lawyer.
Related Topics
Related Posts
Comments