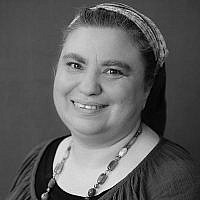 The Blogs
Devorah Schoenfeld
Apply for a Blog
Please note that the posts on The Blogs are contributed by third parties. The opinions, facts and any media content in them are presented solely by the authors, and neither The Times of Israel nor its partners assume any responsibility for them. Please contact us in case of abuse. In case of abuse,
Report this post. 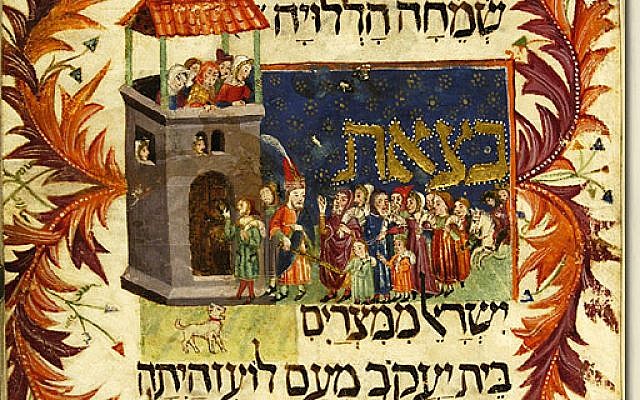 Illustration of Moses leading the Children of Israel out of Egypt in the Kaufmann Haggadah, 14th century. (Wikimedia Commons)

Who is the Moses of our generation? Should we look for one? If so, where? This parsha discusses many different kinds of leadership, and suggests a surprising answer: leadership after Moses does not belong to a single person, but rather to different kinds of people, with different backgrounds and roles.

The book of Deuteronomy is the farewell speech by Moses to his people, and in it he needs to get them ready to live and thrive as a people after his death. In this parsha, Moses answers an important question for the people: who will lead them when he is gone? He does not answer it by naming a specific person, rather by describing kinds of leaders: judges, priests (and Levites), prophets and kings. All of these are potential leaders, and all have different functions.

The judge is described in Deuteronomy 16:18, at the beginning of the parasha:

You shall appoint magistrates and officials for your tribes, in all the settlements that the LORD your God is giving you, and they shall govern the people with due justice.  You shall not judge unfairly: you shall show no partiality; you shall not take bribes, for bribes blind the eyes of the discerning and upset the plea of the just.

Deuteronomy 18:1-9 sets out another category of leaders: Priests and Levites.  The Levites are a designated tribe of Israel that does not recieve any land, which cuts them out of the agriculture-based biblical economic system. The role of the Priests and Levites (the passage discusses them both) is to act as God’s servants and attendants. They will be supported by a system of tithes, first fruits and portions of sacrificies, and they are all to share this support equally.

Some responsibilities are given to both categories jointly. In Deuteronomy 17:8-12, it states that when you have a question you are to ask it to the judge or the priest, so both of them are responsible for settling disputes.

I will raise up a prophet for them from among their own people, like yourself: I will put My words in his mouth and he will speak to them all that I command him;

Deuteronomy 18:21-22 gives the people a very straightforward test to determine if someone is a true prophet: they are to see whether or not the prophet prophesies things that then come to pass. So the prophet is appointed directly from God, but it is up to our own rationality and powers of observation to determine if the prophet is legitimate. The prophet has a particular kind of responsibility: to relay God’s word to the people.  The prophet must speak this word exactly, and nothing else.

God explicitly compares the leadership of the prophet to that of Moses, in verse 18, with the phrase, “like yourself.” The two other roles of judge and Levite also connect to the life of Moses. Moses is introduced in Exodus 2 as being a Levite, and in Exodus 18 we see Moses exhausting himself trying to be a judge of the entire people and then coming to realize that he needs deputies. Moses also is the resource for people to ask questions, like both the Levite and the judge.

There is a fouth kind of leadership that may or may not be optional, and that is the rulership of a king.  In Deuteronomy 17:14-15 it states:

The language of this passage is ambiguous. Does it mean that you should appoint a king, or that you may do so if you choose? In Sanhedrin 20b there is a debate about this, with R. Yehuda and R. Yossi reading the passage as requiring a king and R. Nehorai reading the passage as allowing for the possibility of one. In any case, this is one form of leadership that seems not to have a direct parallel to the leadership of Moses. Nevertheless Deuteronomy 17:16-19 connects the king to Moses by giving the king two particular responsibilities: he is not to return the people to Egypt (and is not to have too many horses, which could lead to sending people to Egypt), and he is to write a Torah scroll. These two particular commandments to the king connect him to Moses, who led the people out of Egypt and was involved in the writing of the Torah.

Kingship, unlike judgeship and prophecy, but like priesthood, passes from the king to his descendants, as we see in Deuteronomy 17:20

to the end that he and his descendants may reign long in the midst of Israel.

In the end, we find that the role of Moses cannot be filled by any one particular kind of leader, but rather different kinds of leaders. These different leaders come from different parts of the population, have diffferent responsibilities, and are evaluated in different ways, and one does not seem to take precedence over the other. Moses leaves to the people a kind of leadership in which there are diverse forms of authority, and those holding each office may often disagree with one or more of the others.

Normally snow and fire would destroy each other: the fire would melt the snow and the snow would quench the fire. These competing natures of snow and fire may suggest different values,or differemt roles: Michael encourages God’s wrath, while Gabriel cools it. God creates peace between them and allows them to live together and to each have their role in God’s heaven.

We see then, in this parsaha, a model of society in which many kinds of leadership are welcome. No one can be fully like Moses, but no one has to be. There are many ways to be a leader, in this parsha and in Israel.

About the Author
Dr. Devorah Schoenfeld is Associate Professor in the Theology department at Loyola University Chicago, where she teaches Bible, Judaism, Comparative Religion and Jewish-Christian Relations. Her book Isaac on Jewish and Christian Altars: Genesis 22 in Rashi and in the Glossa Ordinaria compares medieval Jewish and Christian approaches to the akedah, and she has also written on midrash, comparative theology, and dream interpretation. She is a member of Anshe Shalom Bnai Israel in Chicago and a student in the Executive Ordination Track at Yeshivat Maharat.
Related Topics
Related Posts
Comments