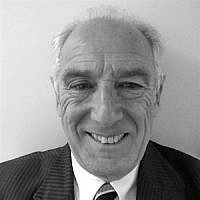 The Blogs
Simon Adler
Apply for a Blog
Advertisement
Please note that the posts on The Blogs are contributed by third parties. The opinions, facts and any media content in them are presented solely by the authors, and neither The Times of Israel nor its partners assume any responsibility for them. Please contact us in case of abuse. In case of abuse,
Report this post.

Unfortunately, people in this third group might find themselves the frogs in a slowly heating pot – by the time the heat is intolerable, it is too late; frog soup will have arrived.  Yet, decisions have to be made on many important points and, frankly, these decisions are too important to be left to a situation where the people at the two activist points merely yell imprecations, accusations, and “you’re going to end the world as we know it” memes and slogans at the others. A desirable long run future depends on all parties’ willingness to see that, while other may still be “wrong”, he/she/it/they are not the devil incarnate and, indeed, may have some points which are difficult to refute (even if not sufficiently weighty, in the final analysis, to change one’s mind).

And this brings me to the question of parliamentary override clauses currently “on the agenda” in Israel.

I practiced (primarily) commercial litigation in Canada for 41 years before retiring. In addition to the ordinary qualifications, I have Masters in Constitutional Law (Canadian Charter of Rights and Freedoms). I have argued Charter of Rights cases up to and including the Ontario Court of Appeal, including representing B’nai Brith Canada’s League for Human Rights in cases relating to prayer and religious studies in the public school system of Ontario. This history does not make me an expert whose opinion on whether an override clause would “end democracy as we know it” or “allow the people to speak” must be followed.  My goal is only to argue that reasonable people MAY differ on whether a parliamentary supremacy / court override clause is or is not desirable as part of the constitution of a western, liberal, representative democracy.

The Canadian experience shows that inclusion of a parliamentary supremacy / court override clause is by itself neither good nor bad – the value or harm of such a clause depends on the aims of the government of the day, on the degree to which the court takes an “activist” or “conservative” approach to the questions on which it will adjudicate, and, finally, the will of the people.

US Justice Learned Hand said it best in his “Spirit of Liberty” Speech, 1944:

Achieving the right balance between objectivity and political involvement in the manner of selection of judges and a habit of careful selection of politicians by electors are FAR more significant, to my mind, than the inclusion or omission of an override clause.

The Canadian Charter of Rights and Freedoms guarantees the rights and freedoms set out in it subject only to such reasonable limits prescribed by law as can be demonstrably justified in a free and democratic society.

There is another most important difference in that the Canadian Charter contains an explicit parliamentary supremacy / court override clause which relates to the “standard” rights (speech, religion, assembly, equality etc.).  This is in section 33 which is as follows:

(2) An Act or a provision of an Act in respect of which a declaration made under this section is in effect shall have such operation as it would have but for the provision of this Charter referred to in the declaration.

(3) A declaration made under subsection (1) shall cease to have effect five years after it comes into force or on such earlier date as may be specified in the declaration.

(4) Parliament or the legislature of a province may re-enact a declaration made under subsection (1).

(5) Subsection (3) applies in respect of a re-enactment made under subsection (4).

Section 33 was included as a compromise of interests arising under the two systems of law used in Canada (English-derived common law applicable everywhere except in Quebec and French-derived civil law applicable in Quebec) and the tensions between those who feared undue judicial activism and those who felt the need for fetters on government.

Shortly after the enactment of the Charter, the Province of Quebec enacted an omnibus bill exempting all legislation from the operation of sections 2 (conscience, religion, belief, assembly, association) and 7-15 (legal rights) of the Charter.  The Supreme Court found this Act did not contravene the Charter and was within the powers of the Province of Quebec: Ford v. Quebec (Attorney General), [1988] 2 S.C.R. 712.  After 5 years, the provision expired in accordance with s. 33 and the omnibus bill was not reenacted.

In my view, Quebec enacted the omnibus act out of pique at not getting its way during the negotiations which gave rise to the Charter.  Of note, however, the use of s. 33 created great internal popularity for the provincial government of the day and was seen as furthering Quebec’s pre-existing (to my mind, racist/ethnocentric) policy of fostering French as THE language of Quebec and, through requiring schooling in French for all who did not have a constitutional right to English schooling, the fostering of the “Québécois culture”.

Section 33 has since be relied upon in Quebec in other individual language- and schooling-related legislation and in legislation forbidding the wearing of visible items identifiable as pertaining to religion (e.g. kippah, hijab, turban etc.) if one is teacher or other civil servant. The explicit intent is to create a French-speaking, secular public culture in Quebec.

Recently, in Ontario, a s. 33 declaration was added to draft back-to-work legislation to forestall a teacher’s strike. There was an outcry by the “woke” community which caused the government to withdraw the legislation.  News reports suggest that the premier agreed not to do it again.  However, it is to be noted that the teachers did not strike and did accept a deal which was less than their demands, again, according to news reports.

The Province of Saskatchewan has also used the clause in relation to legislation relating to the funding of schools.  I am not familiar in detail with the legislation but it may have been designed to prevent litigation (as I was involved in, in Ontario) claiming that funding of public but not religious schools was contrary to the Charter equality rights.

One’s judgement of the actions/policies of Quebec as “good” or “bad” would likely reflect one’s judgement of the Israeli “Nation State Law” as both are intended to foster/protect/assert a particular culture in a defined region, claiming, at least rhetorically, not to derogate from the “real” rights of minorities.  There is no doubt that logical arguments can be made to characterize both as “racist” or at least “ethnocentric”.  Whether this characterization is right or wrong and whether, if right, the law is “good” or “bad” are all things reasonable people can argue about.

In fact, I have found myself arguing that there are some merits to the Israeli law and that the Quebec laws are offensive.

The experience in Ontario demonstrates that an extremely vocal minority can prevent the use of the notwithstanding clause, if large enough, by characterizing it as “the start of the slippery slope to fascism” – assuming that the government is sensitive to such charges.

This issue cannot be discussed without also noting (thus proving Learned Hand’s thesis) that in the US where the rights have no express limitation and the Courts cannot be overruled by the legislature, Americans who happened to look Japanese due to genetics were interned and deprived of rights of mobility, assembly, property, due process etc. all contrary to the wording of the constitution during WW2.  The same happened in Canada without there then being any similar formal, written constitutional protections.

There is an argument to be made that using a notwithstanding clause in true emergencies is at least less hypocritical than pretending that the emergency methods do not, despite their appearance, conflict with protected rights.

There is an argument to be made, also, that courts (in my limited experience ESPECIALLY the Israeli Supreme Court) have a tendency, whether they admit it or not, to interpret and reinterpret constitutions, laws and their own powers in ways that tend to expand the reach of the Court and its influence on public policy.  The adoption by the Court of the right to strike down legislation because it is “unreasonable” seems a gross over-reach in a parliamentary democracy — especially as, always, reasonableness is in the eye of the beholder.

Courts are inherently non-democratic and non-representative of “the people” both by definition and by virtue of the nature of the group out of which its members are chosen.  Thus a total absence of any way in which the will of the people can be expressed despite the decision of the Court may result in a lessening of regard for the Court and more extreme rhetoric (and actions) by politicians.  This can be very detrimental to the rule of law in the long run. I think we are seeing this playing out, exactly, in regards to abortion issues in the US.

All that said, the point that illiberal governments can come into power via democratic process has been proven by history.  At minimum, if there is an enacted, clear set of overarching principles clearly defined — either in a Constitution or Basic Law — a court is best (and I would argue, inevitably) suited to determine if a given law contravenes the Constitution or Basic Law.

Ultimately, the real issue is the willingness of all parties – courts, legislatures, electors – to think, to try to see the argument of the other as at least worthy of careful, respectful refutation and to employ a certain amount of self-restraint in the use of whatever tools are available. I’m talking to you, Prime Minister Netanyahu!!

About the Author
Simon Adler divides his time between Kitchener, Ontario and Israel. A retired lawyer, he has a long history of service to his Shul and non-Jewish organisations.
Related Topics
Related Posts
Simon Adler