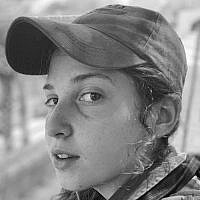 I first noticed your eyes, Jundiin;
Soulful and brown,
Staring at me intently,
Asserting your authority.

Merely caught in the crossfire of tragedy,
I fell victim to fate, and God’s wrath.
Worst of all: I did nothing wrong.
My father did,
And I payed the price for it.

When my family pulled up to the checkpoint,
In our broken down, white, Mitsubishi,
I prayed you wouldn’t find the knife.

My mother and sister smiled at you,
And you smiled back, genuinely.
Perhaps- in another world lifetime,
You could have been good friends.

My father smiled at you too,
But you saw right through him.
Though his smile seemed sincere,
His vacant eyes gave away the secret.

“Everyone out of the car, now.”

While you checked the car,
I held onto my father’s leg.
Looking at me as if you had robbed me,
And you did rob me, Jundiin.

My father broke into a sweat,
Crossing his arms,
To stop his shaking hands,
My heart sank when you found it.

Under the drivers seat
Wrapped in a white cloth,
Was a large serrated knife.

I shouted for him so,
Tears streaming down my face.
My mother and sister pushed me into the car,
Still desperately shouting, I was driven away.

I knew right then-
My childhood was over.

By taking my father from me,
Another father had been saved,
From a painful, and horrid death.

Another child will have a father’s lap to sit on,
Shoulders to ride on,
A hug to cry in,
At the price of me not having one.

You were both a monster and guardian angel simultaneously.

You were raised to fear me-
For me being me
I was raised to hate you-
For you being you.
And I hated you passionately, Jundiin.

I see your menacing gun when I try to sleep,
And the image of your eyes has not left me since.

Perhaps one day,
You will understand what you did.
Though you were just a girl, a child like me.
Though your uniform is just clothing.
Though your gun is just metal.
Though you have brown eyes like me, Jundiin.

About the Author
My name is Abigail Leibowitz, I’m 19, and serve in a combat battalion. I am originally from New York and made Aliyah with my family in 2010.
Comments