The Blogs
Ronny P. Sasmita
Apply for a Blog
Please note that the posts on The Blogs are contributed by third parties. The opinions, facts and any media content in them are presented solely by the authors, and neither The Times of Israel nor its partners assume any responsibility for them. Please contact us in case of abuse. In case of abuse,
Report this post. 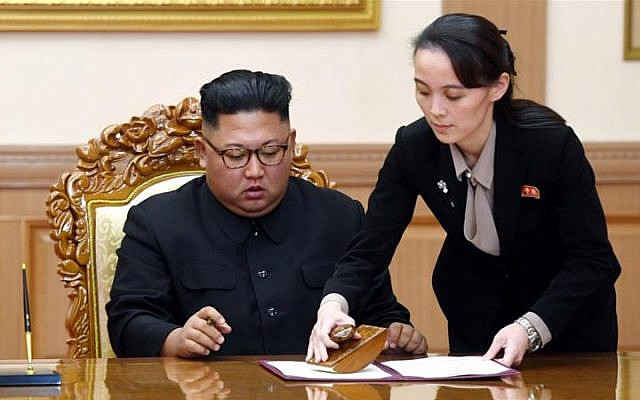 Kim Jong Un with his sister, Kim Yo Jong: Kim Yo Jong has become an increasingly visible in the North Korean regime, fueling widespread speculation that she is being groomed as her brother’s successor. (AP)

Kim Jong Un and His SisterIf you go to North Korea, don’t be angry if you have a Holy Bibble or Holy Quran in your bag, then the fate is over when you win the Sinuiju Railway Station (North Korea train station), crossing the river after Dandong Railway Station. The North Korean Border Officer will confiscate it, observe your belongings, see all of your mobile contents, and so on. Do not be angry, if you really intend to continue the journey to Pyongyang. The rules are really like that.

Early in the morning in Pyongyang, at around 5 o’clock, you should not throw a tantrum if your ears are disturbed by the sound of speakers in almot all of the area of ​​Pyongyang. Those are songs of worship and respect for Kim Il Sung. If you are familiar with the Dawn Adhan, if you are muslims, then the taste will not be too troublesome. In Pyongyang, there are speakers in every corner. This is a form of indoctrination from North Korea, sent by China at a higher level, that is, millions of cameras in every corner of the city, a form of CCP “control” over the behavior of its people. The steps are already visible, indoctrination and public surveilences. That’s the rule of it. Cannot be resisted. What do you want to say?

And don’t forget, keep adapting in front of the two statues in the “Mansu Hill” area, because it’s two statues of Kim il Sung and Kim Jong il. No matter you are American, British, Chinese, Japan, or Indonesian, or any country, no matter you consider Kim Il Sung, Kim Jong Ill, or Kim Jong Un like what, if you do not want to bow, at least do not ask for responsibility. For every North Korean who passes there, they already knows the adaption itself, they must bow as a sign of respect and obedience.

Likewise with the critical questions that we usually ask, everything only applies outside of North Korea, but inside, and it will not be responded to by people. “We have our own ways to become citizens, we have our own ways to treat our leaders,” they said, regardless of honesty or small talk. What do you want to say? Even when you know a way of understanding that might not be right for history, you can’t help but say yes, at least just nod. Such as the Korean people consider the Korean War started by America and won by them, North Korea, not America. Even if your history books say that Kim Il Sung tried to invade Seoul and qualitatively America won

That’s the conditions and rules of the game in North Korea, which is still the same as 70 years ago, when Kim Il Sung launched an attack on Seul, South Korea. The change of leader to Kim Jong Ill and Kim Jong Un, has not changed the conditions and rules much. This country is still an isolated country, which continues to teach its people the perspective that everything outside North Korea is far worse than inside North Korea.

Various results of studies that say that there are acute hunger and poverty in North Korea will not be able to change the regime’s policies for the better and be more concerned with the economic interests of its people. Not with Kim Jong Un, nor with his future successor sister, Kim Yo-Jong. In fact he was impressed far more heart and cruel than his brother. Yo Jong has the opportunity to open a nuclear war with South Korea, Japan, or Guam, if the reaction of United State, Japan, or South Korean  are less acceptable. She seems to be far more courageous to react aggressively than Kim Jong Un. Se was reportedly also a figure behind the scenes of North Korea’s reaction to cut off communications with South Korea and then destroyed the liaison offices of the two countries. Both actions are reportedly the fruit of his whisper to Kim Jong Un

Just look at a last little-noticed statement by her which indicate that no more arms talks will be held anytime soon and even that the deal Kim offered at last year’s summit with President Donald Trump in Hanoi, Vietnam—to shut down one nuclear reactor in exchange for the lifting of all U.S. sanctions since 2016—is now off the table. Kim Yo-jong, first vice director of the Workers’ Party of Korea’s Central Committee and a woman of steadily growing power who has spoken on her older brother’s behalf several times in recent months, said  that another summit with Trump would be “unpractical” and “not serve us at all.”

At least one wire story about her statement, released by the Korean Central News Agency, reported that she suggested such a meeting might still happen, but this isn’t quite the case. Rather, she said that a summit—or even the continuation of talks between midlevel diplomats—would happen only if the U.S. made “major changes” in its “attitude” and ended its “hostile policy” toward North Korea. To North Korea, as its diplomats have long made clear, ending America’s “hostile policy” would mean withdrawing all U.S. troops and nuclear-capable forces—in other words, pretty much all air and naval forces—from northeast Asia, including South Korea and Japan, which is imposible for US.

So in short, for South Korea, the dream of reunification with North Korea is still far in the future, if there is hope. It’s also for US who really want to try to offer new meeting with Kim because of nothing to do with North Korea in the substantial matters. Except for a big war in the South China Sea where one of the Americans or China wins. It would certainly change many things in Indo Pacific.

About the Author
An International Political Economy and Strategic Analyst, A Senior Fellow at Indonesia Economic Action Institution/EconAct
Comments