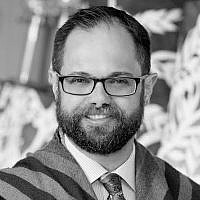 The Blogs
Micah Streiffer
Apply for a Blog
Please note that the posts on The Blogs are contributed by third parties. The opinions, facts and any media content in them are presented solely by the authors, and neither The Times of Israel nor its partners assume any responsibility for them. Please contact us in case of abuse. In case of abuse,
Report this post.

This coming Shabbat, Jews in every synagogue around the world will open the Torah scroll and read about leadership:

You shall appoint judges and officials in all your gates…and they shall govern the people with due justice…. Justice, justice shall you pursue, that you may thrive and occupy the land. (Deuteronomy 16:18-20)

Yesterday morning, two female rabbinical students showed up at one of those “gates” — the security entrance to the Western Wall plaza — and were met not with “due justice” but with indignity and violation. The two were removed to a separate location and required to lift their skirts and open their shirts in order to prove that they were not attempting to smuggle in a Torah scroll. (They weren’t.)

Strip-searched. To prevent the Torah from entering the Kotel plaza.

This is another in a long string of provocations and intimidations sanctioned by the rabbi of the Kotel, intended to keep women and liberal Jews from participating in organized prayer services at the Western Wall. From whistling and shouting during worship, to bodily attacks and destruction of prayerbooks, to arrest or detainment of those carrying Torah scrolls, Judaism’s holiest site has become the scene of an appalling circus of terror by Jews against Jews. What a sad irony that this latest incident took place during the week of Parashat Shofetim, the weekly Torah portion dealing with leadership, and was perpetrated against individuals who have committed to be leaders of the Jewish people.

As students at the Hebrew Union College, these women are studying to be rabbis. Only a few years from now, they will be the proverbial “judges in the gates” of congregations, Hillels, or Jewish communal organizations. But were they treated as leaders? They weren’t even treated as human beings.

This week’s parashah teaches a basic Jewish value: “Justice, justice shall you pursue.” The medieval commentator Ibn Ezra teaches that the word “justice” is repeated because “one must pursue justice whether it be to one’s gain or to one’s loss.” Justice isn’t about what you want or what’s convenient. It isn’t about getting your way or proving your point. It is about upholding the dignity and the rights of every human being, regardless of who they are and whether we agree with them. Violating women’s bodies in order to maintain male hegemony over a holy site — in order to prevent the introduction of a Torah scroll into the Kotel — is not only a sickening irony, but the absolute antithesis of the Jewish value of justice. Leadership is about the responsible use of power, and using that power to violate or intimidate is the very definition of abuse. Such behavior cannot be tolerated at the gates of the Western Wall plaza, or in the Jewish state, or anywhere in our society.

Justice, justice shall you pursue.

About the Author
Micah Streiffer is a rabbi and writer, and spiritual leader of Kol Ami, a progressive Jewish community in Thornhill, Ontario, Canada.
Related Topics
Related Posts
Comments