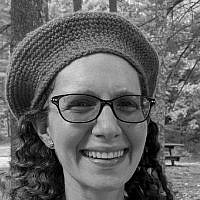 The Blogs
Yehudit Robinson
Apply for a Blog
Please note that the posts on The Blogs are contributed by third parties. The opinions, facts and any media content in them are presented solely by the authors, and neither The Times of Israel nor its partners assume any responsibility for them. Please contact us in case of abuse. In case of abuse,
Report this post.

I didn’t expect to say kaddish with any regularity. When my father, Morris Robinson, died a month ago, I intended to recite only the three kaddishes at the end of the shabbat davening each week and instead focus on helping raise three young children. At the shiva minyanim at my parents’ house, however, I realized that I would never experience a more supportive environment in which to say kaddish, with my mother, sisters, and aunt by my side, and my brothers and uncle on the other side of the mechitza. My husband encouraged me to continue, as well as some friends who have experienced loss; surprisingly, in addition to shabbat mornings, I have been able to go to shul several times a week for mincha / maariv. Without fail, I find myself echoing my fellow mourners by lapsing into the traditional Ashkenazi pronunciation, and this amuses me every time, as it runs counter to a dozen years of dayschool education.

I bring a lot of anxiety to the recitation of kaddish. When I was in middle school, one day a female classmate insisted that, at the necessary time, she would say kaddish for her parents. Although I was sympathetic, I remember thinking that this was not typical practice. And now I find myself wondering many times whether anyone on either side of the mechitza will be offended by my vocal participation. How loud should I be? Should I recite the words, or is it ok to chant them? What if my kaddish recitation is counter to someone’s idea of what a shul should be? Sometimes someone who has the outward appearance of being more traditional joins the minyan, and I start sweating. How will I respond if he asks me to remain silent? Is it ok if I say that I’m a member, that the rabbi allows women to recite kaddish here, that my father died a month ago? Do I need to defer to his potential expectations? Should I leave without trying to pray? Or perhaps he is more open to possibility? At this moment, he morphs from a fellow parishioner to a potential challenger, but the feared confrontations do not occur. Rather, the only men who have approached me after davening have done so with words of compassion – including one who told me that he peeked over the mechitza to make sure I was done with aleinu before starting kaddish, and these small gestures of kindness have helped me feel welcome at the three shuls among which I am rotating.

As the shloshim approaches, I want to thank the women and men, whether mourners or not, who helped reset communal consideration over the past thirty years by giving a face to a concept and thus helping normalize the practice of women reciting kaddish in shul. There are enough horror stories of how women who attempted to say kaddish in shuls were traumatized because their efforts were misunderstood and misinterpreted. The shul sanctity conversations from the 90’s didn’t fully consider the needs of the bereaved, who, having experienced irreversible loss, are seeking solace in the sanctuary. When I shared some of my concerns with a man, he was astonished and responded, “but how could anyone be upset? It was your father”, and I think this reaction reflects an altered awareness.

I also want to thank the woman who let me know that a shul that I hadn’t considered for kaddish would indeed be a place where I would be welcome. I asked the rebbetzin of this shul about it because of my concerns of how I would be perceived, and she responded, “women have been saying kaddish here for years.” I realized how easy it is to make assumptions about faith communities based on externalities and assume that the flashpoints of yesteryear reflect current discourse. I also want to thank the women who have sat next to me who have taken care of my children during shabbat services when they suddenly are seeking my attention precisely when I am trying to say kaddish. Finally, I am grateful to the women who prepared meals for my family after the shiva had concluded (and to the rabbi of one of our shuls, who delivered one of them), which allowed my husband and me to focus for the first week on segueing into our new shabbat routine of getting to shul on time with three young children instead of on food preparations.

Because I have been so concerned with context, it has taken me a long time to reflect on the meaning of the words in the siddur. By reciting the kaddish, the mourners announce their presence, a sub-community seeking support. We attempt to match each other’s tempo, to create a unified plea from our private thoughts. After the collective gaze has moved on to the next shiva, the next crisis, the avel continually vocalizes his / her often complicated grief, and reminds the fellow congregants that he / she is still in need of attention. The kaddish is a positive, affirmative prayer, and the congregants, even if they don’t know the mourner, cathartically respond again and again “amein” – we agree, we affirm the truths of your complex relationship with the one you have lost. The congregants thus verbally comfort the bereaved, and I find it meaningful that this interaction both with G-d and each other is part of the daily davening.

Kaddish comes at various times in the service. And sometimes I ponder: here it is, at some random time in the day, and I find myself in shul, contemplating the one I lost. Here, at this random moment, I remember you. I consider the dreams that you merited to fulfill, one of the most important being that you raised six children to lives of torah and mitzvot, which was your way to symbolically rebuild the Jewish people after the Holocaust. And I also ponder the dreams which you were not given the time to fulfill, including having more time to learn torah and write. I vocalize my grief, by chanting a well-worn prayer of positivity, ultimately wishing peace and serenity to the Jewish people, and I hope, somehow, that these prayers resonate and reach the heavens.

I wrote the above essay in late February, 2020, about two weeks before covid shut down all in-person minyanim for several months. And then, due to my husband’s kindness in getting up early for hashkama minyanim, I was able to attend sporadically some outdoor minyanim and resume saying kaddish once again.

On Wednesday, December 16th, mid-Chanukah, I said the final kaddish in my neighbor’s backyard at mincha as the darkness and snow descended in tandem, as surreal as the rest of the past 11 months. And, with maariv, I was the agent to others’ memories when I responded to their kaddish, as I was done reciting mine.

I would like to thank the indoor and outdoor minyanim at Beth Aaron, Netivot Shalom, and The Jewish Center of Teaneck for making me feel welcome. I found saying kaddish to be very meaningful in helping me maintain a connection despite the ultimate distance. 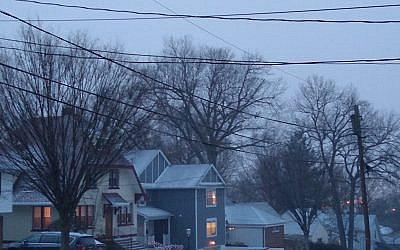 Snowy twilight following the final kaddish recitation.
About the Author
Yehudit Robinson is a Judaic Studies tutor in Teaneck.
Comments