The Blogs
Nina B. Mogilnik
Apply for a Blog
Please note that the posts on The Blogs are contributed by third parties. The opinions, facts and any media content in them are presented solely by the authors, and neither The Times of Israel nor its partners assume any responsibility for them. Please contact us in case of abuse. In case of abuse,
Report this post. 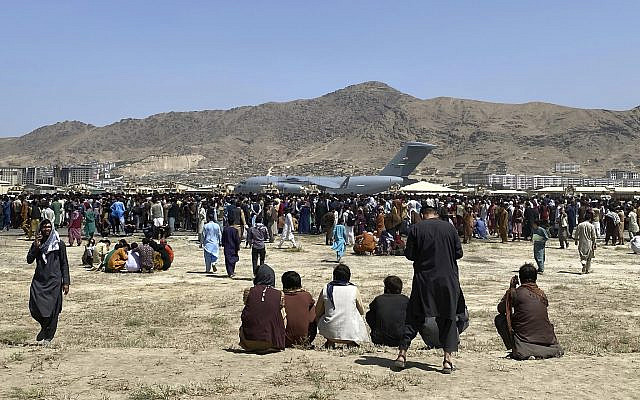 Hundreds of people gather near a US Air Force C-17 transport plane at a perimeter at the international airport in Kabul, Afghanistan, August 16, 2021. Thousands of Afghans trapped by the sudden Taliban takeover rushed the tarmac and clung to US military planes deployed to fly out staffers of the US embassy, which had shut down. (AP Photo/ Shekib Rahmani)

There is much anguish, rage, frustration, disappointment, and all manner of confident, muscular commentary coming from all quarters in America right now. The number of folks who seem to possess effortless expertise about America’s role in and withdrawal from Afghanistan is boundless, if the amount of ink and oxygen spilled on the topic in recent days is any indication.

But what truly amazes me is not the blathering of paid mouthpieces. That bit of idiocy masquerading as expertise characterizes much of the American media landscape. What truly amazes me is the paucity of humility, the inability to pause, take a breath, and mourn. War is a terrible, devastating thing. It is that in its beginning, in its prosecution throughout, and in its “ending,” however orderly or chaotic. Our inability to embrace that reality, rather than launch rhetorical missiles defending or maligning choices made and not made is a sign of our collective moral rot.

In Afghanistan as elsewhere in war, people died. People were maimed. People were traumatized. For life. The mix of those devastated by war included combatants, but also civilians, the women and children who are the convenient, collateral damage of the wars waged almost exclusively by men. Did we have reason to be in Afghanistan after 9/11? I suppose we did, if that was our only reasonable path to trying to punish bin Laden and his followers. But once he was caught and killed — in neighboring Pakistan, of course — we had no argument for continuing our muddled project of “nation building” in a nation that had no say (and clearly no real interest) in that American-imposed agenda. But this war continued because military leaders refused to tell the truth about its failures, political leaders refused to pursue and share the truth, and above all because war is money. For American military contractors, for private companies like Blackwater — the bottom-feeders of humanity, in my humble opinion — and for the satisfaction of shareholders and politicians who gain from the carnage of war. It is a grotesque arrangement, made more grotesque by the fact of the burdens of American wars being fought by an all-volunteer military, while the rest of us go about our lives, blissfully ignorant of what others bear in our name(s).

So what of America’s abrupt pull-out from Afghanistan? Tragic? Appalling? Predictably chaotic? I’m not sure the adjectives matter. What matters — and what will surely be lost in the mindless blatherings of partisans with no real stake in the human consequences of war — is that we squandered the lives of thousands in pursuit of a goal that was never attainable. And we continued to do so because it was more important that we play smoke and mirrors games about progress than admit that we’d dug in on something unattainable. We were fighting a war we could not win, with people unwilling to defend what we kept claiming they cared about. We inserted ourselves, unwanted, into an medieval world. We literally bribed our way toward some version of cooperation with Afghans, which was only ever the thinnest layer of fidelity to “America’s mission,” a project entirely at odds with Afghanistan’s own cultural, religious, and political preferences.

We like to believe, as Americans, that our version of things like women’s rights has universal valence. It most assuredly does not. And if American soldiers are the only thing that defends the prospects of women and girls in a foreign land, then those prospects are slender indeed. We can wring our hands over that, but we cannot fix it. It can only be fixed by Afghans — men and women — but especially men, somehow deciding that girls and women matter.

But I digress. We will be unable, I am sure, in the arrogant, and even hysterical yammering that passes for sage commentary in America’s newspapers and on its airwaves, to pause to mourn, to honor, to regret, to feel sad, to feel anguish, to feel even anger at the wages of war and the failures of the “leaders” who prosecute them. For those chastising President Biden for our hasty retreat, might I suggest you sit before the parents who’ve buried their soldier sons and daughters and tell them exactly what they fought and died for. Might I suggest that if you believe there is never a reason to leave until we’ve “won” that you be the first to propose the reinstatement of a military draft, and put your own sons and daughters first in line to be sent to war.

Our exit from Afghanistan has been messy and even embarrassing. But it has not, in my humble opinion, been wrong. For how long were we to continue to pretend that we’d accomplished something? For how long were we to lie to ourselves and allow ourselves to be lied to? The tragedy of our failures in Afghanistan will be used to make political hay, because that is what craven politicians do. But as several of the more serious commenters have noted, we lost Afghanistan years ago. We were just unwilling to own that loss in the harsh light of day. Until President Biden forced us to.

Now we will watch the making of further mistakes, out of guilt, hubris, fear, and all manner of other messy motivations. My hope is that the Taliban will somehow moderate but if not, that Afghans themselves will find ways to wring from the rubble of their nation something better, fairer, perhaps even a little just. As for America, I hope (against hope, surely) that the megaphones of the chest-thumping, pro-war contingent quiet and that they replace their righteous rage with some semblance of humility and honesty. And that somewhere in there, they can find the human decency to apologize for the sacrifices they foisted upon volunteers who were lied into dying for a war they had no business being asked to fight and keep fighting, for little purpose and in the end, lesser gain.

About the Author
Nina has a long history of working in the non-profit, philanthropic, and government sectors. She has also been an opinion writer for The Jewish Week, and a contributor to The Forward, and to The New Normal, a disabilities-focused blog. However, Nina is most proud of her role as a parent to three unique young adults, and two rescue dogs, whom she co-parents with her wiser, better half. She blogs about that experience now and again at parentjungle.blogspot.com
Related Topics
Related Posts
Comments