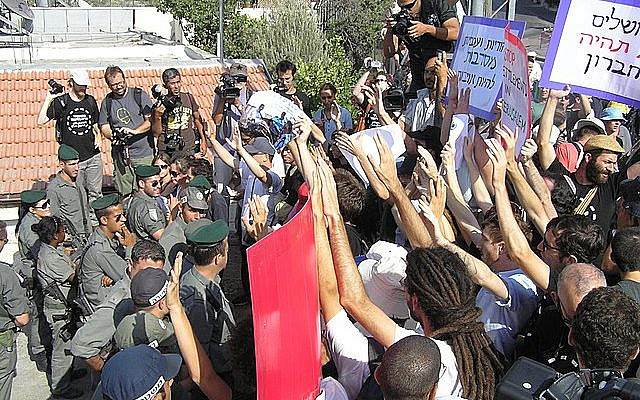 The state of Israel will promote the development of the country for the benefit of all its inhabitants; will be based on precepts of liberty, justice and peace taught by the Hebrew prophets; will uphold the full social and political equality of all its citizens without distinction of race, creed or sex; will guarantee full freedom of conscience, worship, education and culture; will safeguard the sanctity and inviolability of shrines and holy places of all religions; and will dedicate itself to the principles of the Charter of the United Nations. from Israel’s Declaration of Independence , May 15, 1948

Israeli society is facing many dangers from outside and from inside. However, it seems that our greatest threats lately are actually coming from some of our most dangerous politicians or so-called “leaders”.

First of all, I need to explain what I mean by Kahanism. It refers to the anti-democratic, extremist, ultra-nationalist, xenophobic ideology of a former Member of Knesset by the name of Meir Kahane. Kahane, who founded the hooligan group called the Jewish Defense League in Brooklyn in 1968, was imprisoned after being arrested for making bombs, and thereafter brought his violent, angry attitude and behavior with him to Israel when he moved here in 1971.

In Israel, Kahane became a rabid anti-Arab racist – promoting the idea of forced “transfer” of Israeli Arabs out of the country. Unfortunately, he attracted many followers, including the young Itamar Ben Gvir and his friends Bentzi Gopstein and Baruch Marzel (two of most dangerous Jewish extremists still functioning in Israel to this day). Eventually he formed an extreme right-wing party called Kach with which he ran for the Knesset. In 1984, Kahane was elected and served one term, during which he gave repeated racist speeches which were shocking and distressing to most of the political system, and most of Israeli society, at that time. In fact, he would often speak in front of an empty hall, and the mainstream news refused to cover his speeches back then! Immediately after this one term, his political party was banned and not permitted to run for the Knesset in the next election (1988). He was labeled as persona non grata in Israel and his extreme racist ideas were considered to be beyond acceptable norms!

Israel was a very different society back then, such that it could not tolerate someone as anti-democratic and verbally violent in its midst as Kahane. He was assassinated in New York in 1990 but his ideas unfortunately live on in Israel under his name, and therefore the term Kahanism. What a legacy!

Much has changed since then in Israel (and the world). In recent years, Trump, Orban, Bolsonaro, Putin and Bibi have brought the level of political discourse to new dangerous lows that are threatening many democracies to the core. In my two countries of residence, both Trump and Bibi continue – from the opposition — their outrageous attacks on the mainstream democratic institutions including the judicial system, law enforcement, the media, etc. — and they have many dangerous followers. This is why we have a new phenomenon in Israel, parallel to the one in America, which has been called Bibism by many in the media here, since it is similar to Trumpism in the USA. It is a neo-fascist movement characterized by hero-worship of a megalomaniacal leader who encourages this in order to save his skin from law enforcement.

We in Israel have been suffering from Bibism for many years, but it has gotten much worse in recent years, especially since his indictment for breach of trust, accepting bribes and fraud in November 2019 and even more so since his trial began in the Jerusalem District Court in April 2021. He has launched so many tirades against the rule of law, the police, the media and the left that it has become pathetic and almost a satire. But it is not funny any more since he has become a very bad influence on many others in the Israeli parliament, including many within his own Likud party, which he continues to rule with an iron hand.

But this is not all. During the last elections (the fourth in two years in Israel), which took place in March 2021, almost a year ago, he actively recruited politicians from the extreme “religious” and “nationalist” right to run for seats in the Knesset. This led to a new block of three extreme right-wing parties, which are totally misnamed “Religious Zionism”—since they are neither “religious” nor “Zionist” in the normative meanings of these words. He koshered this block because he needed them to help him form a coalition! Thank God that this trick did not work. But it did bring us some Kahanists back into the Knesset, the foremost of whom is a verbally and physically violent hooligan named Itamar Ben Gvir of the Otzmah Yehudit (Jewish Power) party (one of the three fanatical parties of what I call “Anti-religious anti-Zionism”).

This political party is a direct descendent of Kahane’s Kach party. Thirty years ago, it would not have been allowed to run for the Knesset. But now, apparently, this is just fine. Twenty years ago, it would have been renounced from wall to wall. But not any more! Politics in Israel (and elsewhere) have shifted greatly to the right, and the norms have changed, for the worse.

Lately, Ben Gvir has been very much in the news again, since a few days ago he set up a make-shift office in the highly contested Sheikh Jarrah neighborhood in East Jerusalem, creating tremendous tension, and potentially igniting rioting and another Gaza War, as he did last year! The police are treating him with kid gloves since he is a member of Knesset, and they don’t do much to arrest his followers all over Jerusalem and the West Bank, who attack Palestinians and peace activists all the time, with impunity.

Who is this Ben Gvir character?

He grew up in the youth movement of Kach and the Kahane Chai (Kahane Lives) party. In the 1990s, he led protests against the Oslo Peace Accords and in 1995, he threatened Prime Minister Rabin a few weeks before his assassination. Since then, he has been involved in many far-right violent protests that have resulted in him being indicted many times. He once claimed that he had been indicted 53 times! Then he became a lawyer and exploited his newfound knowledge to become an extreme right-wing politician.

Ben Gvir is a clear and present danger to Israeli society, to the delicate fabric of coexistence between Jews and Arabs throughout Israel, and especially to the preservation of peace in Jerusalem.  Like Trump and Bibi, he lies all the time to serve his interests, and he gets away with it. Nowadays, many of the members of the Likud party, still unfortunately led by Bibi Netanyahu, actively support him, and some have visited his tent of incitement in Sheikh Jarrah in recent days.

These phenomena—Kahanism, Bibism and Ben Gvirism—run counter to democratic norms that used to prevail in Israel. They seek to ignite civil war and chaos within Israel and the region! They are extremely dangerous and need to be renounced and repudiated by all sane people here and abroad, all who care about the future of Israel as a democratic and civilized society.