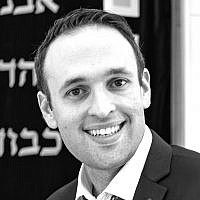 The Blogs
Adrian Javaherian
Apply for a Blog
Please note that the posts on The Blogs are contributed by third parties. The opinions, facts and any media content in them are presented solely by the authors, and neither The Times of Israel nor its partners assume any responsibility for them. Please contact us in case of abuse. In case of abuse,
Report this post.

Every Jewish soul is a flame. How bright that flame is and how high it reaches, is different in each individual and it reflects the journey that each individual Jew is taking in life. There is the Jew that has never seen the inside of a synagogue and has never heard of Shabbat.  There is the Jew that prays at synagogue three times a day and observes every Shabbat.  Then there is every Jew in between.  Although no two Jewish souls are the same, every Jewish soul, every flame, no matter the level of observance, has a yearning to become closer to Hashem. Again, this journey will be different in each Jew, but the origin of this journey should be the same.  That origin, that starting point, is Kashrut.

The laws of Kashrut are the most important laws in the entire Torah. Hashem says in Shemini (Leviticus 11), “You shall not make your souls impure…For I am Hashem Who brings you up from the land of Egypt to be a God unto you; you shall be holy, for I am holy”.  The non-kosher food becomes a part of the person who consumes it.  It fills his blood. The soul is located in the brain, so now the blood that is affected by the non-kosher food flows to the brain. The brain becomes clogged, affecting the soul that resides within it.  There is a cork in the brain, sealing it and preventing the wisdom of Torah from penetrating the brain and dulling his spiritual growth.  The soul, the flame, cannot become brighter and higher.  No other sin has this dulling effect.

There are many people who give lectures about Shabbat, Tefillin, Nidda, Lashon Hara, and many other Mitzvot, with the intention of inspiring, bringing other Jews closer to Hashem.  Some have a soft approach and teach of the spiritual rewards while others have a more stern approach and teach of the punishments in order to instill fear into other Jews.

To all of those who try to help others grow spiritually, before you start working on the positive, get rid of the negative and the impurities.  Otherwise, you are only speaking to a clogged mind that blocks the soul from receiving your wisdom.  First, speak about Kashrut.  The prerequisite to wisdom is Kedusha, holiness, which comes only from eating kosher.

In the verse from the Torah mentioned above, why does Hashem associate Kashrut with our exile from Egypt?  Why does Hashem say, “I am Hashem who brings you up from the land of Egypt to be a God unto you”?  Why the word “up”?  The reason is because it is through the laws of Kashrut that Hashem elevated the Jews, bringing them up, not geographically but spiritually.  In Egypt we were only human beings.  When we came out of Egypt, we were Jews.  We looked the same, had the same bodily functions, but we had an elevated status so Hashem had to tell us what we can and cannot eat.  We were raised differently by others, so our diets had to be different. If someone drives a sports car, he is going to provide it with the best fuel and make sure that when it needs service, it will be brought to the manufacturer which uses special parts. Every Jew is that sports car.  The food we eat, our fuel, is special.  We cannot eat what everyone else eats. Furthermore, who knows better what we need than the manufacturer Himself, Hashem, who provided us with a custom-made diet to help us run the most efficiently?

Unfortunately, many Jews today, including young adults, are very lax when it comes to Kashrut and as a result, they go on a different path in life, one in which the fear of Hashem does not touch their hearts, and the result is arrogance.  They can be rebuked, they can be chastised, but they are so assimilated and so far gone that many cannot even absorb Mussar, basic moral conduct.  In order to save this generation, we need to emphasize the significance of Kashrut and instill the kosher dietary laws into their lives.

The effects of non-kosher food can even be felt in the infant stage.  Breastmilk is a product of substances from the blood. Therefore, when a pregnant woman, or one that is breastfeeding, eats non-kosher food, her breastmilk is being processed from that non-kosher food that contaminated her blood. The result is that the baby’s soul experiences a blockage, which will cause problems throughout its life, as its wisdom becomes contaminated.

Why does Hashem ask us to follow all these laws and why do we keep kosher?  We keep kosher because Hashem asked us to.  We do not fully understand the logic behind Kashrut.  Ultimately, we do not follow the Torah because of reasons, but because it is Hashem’s laws.  Even if it does not make sense, it is from Hashem.  Let us not forget that that the greatest sin that we are still suffering from today, the sin that brought death to the world, the sin that brought the struggle to make a living, the sin that brought labor pains to this world, is all because of two people, Adam and Eve, that ate what they were not supposed to eat, disobeying a direct commandment from Hashem.

Every Jewish soul is a flame.  Our body is the wick and the Torah is the oil.  Just as a wick draws the oil to fuel the flame, our body needs to be a receptacle for the Torah in order to fuel the soul. Who ignites our wick? Hashem.  But this wick does not need to lose its flame.  We can ignite others and share our light with others without dimming our light even a bit.  In fact, surrounded by other lit candles, we stand in even more light.

About the Author
Adrian Javaherian made Aliyah from Los Angeles, California almost seven years ago. He is currently working in the biotechnology industry in Rehovot. He lives with his wife, also an Olah who he met at a Shabbat meal when they were both at Bar Ilan University, and their baby.
Related Topics
Related Posts
Comments