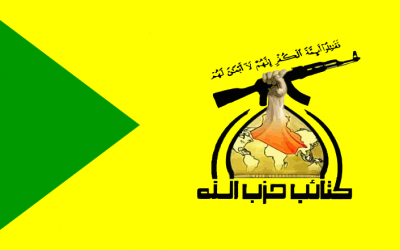 Over the past two years, many analysts have described Iran’s vision for domination of the Middle East as the creation of a “land bridge” from Tehran to the Mediterranean. To achieve that goal, Iran seeks to control three Arab countries: Iraq, Syria and Lebanon. Since Iran is not deploying a massive army to conquer these countries, what strategy is it using to achieve its goal of regional domination? To help understand how the Iranian strategy works, it is helpful to take a closer look at the role of one key Iraqi militia that is loyal to Iran: Kata’ib Hezbollah.

While there are several Iraqi Shiite militias, there is no doubt that the most dangerous and notorious of these is Kata’ib Hezbollah or “KH”. Founded by Iran’s Islamic Revolutionary Guard Corps (IRGC), KH receives funding from Iran and its members receive training both in Iran and from Lebanese Hezbollah.

Since 2007, KH has been designated as a Foreign Terrorist Organization (FTO) by the U.S. State Department. In fact, it is the only Iraqi militia designated as an FTO. According to the State Department’s website, “KH is an Iraqi terrorist organization responsible for numerous terrorist acts against Iraqi, U.S., and other targets in Iraq since 2007”.

Like its role model in Lebanon, the members of KH are adherents of the doctrine created by the Ayatollah Khomeini, the founder of the Islamic Republic, called Vilayat-e Faqih (“Guardianship of the Islamic Jurist”). In that regard, both organizations are a classic example of the fulfillment of the key principle of Iranian foreign policy called “exporting the Islamic revolution”.

Just as members of Lebanese Hezbollah express their loyalty to the Ayatollah Khamenei, the current Supreme Leader of Iran, so too KH members are loyal to Khamenei and not to the government of Iraq. In that regard, KH and the other Shiite militias endanger the future of the Iraqi state.

In his in-depth article in the December 24th edition of the New Yorker titled “Iraq’s Post-ISIS Campaign of Revenge”, journalist Ben Taub wrote: “Shiite paramilitary groups, some of which had carried out thousands of attacks against American troops in the previous decade, had mobilized to prevent ISIS from capturing Baghdad…It was a Faustian bargain; the most powerful militias, which are collectively known as the Hashd al-Sha’abi, are trained, equipped, and funded by Iran’s Revolutionary Guard, and have a reputation for carrying out the kinds of sectarian abuses that had led many Sunnis to welcome the jihadis in Mosul. “Without the Hashd al-Sha’abi, there would be no security in this country,” the senior Iraqi intelligence official told me. “And yet, with them, there is no rule of law. They are above the Army, the law, and the sovereignty of Iraq.”

Beyond its threat to the sovereignty of the Iraqi government, KH was deployed by the IRGC to Syria along with other Iraqi militias to support the Assad regime during the civil war. With the end of the civil war in Syria, Iran is now also including KH as part of its strategy to threaten Israel.

Last summer, reports surfaced that Iran is arming KH with long-range missiles that can target Israel from Iraq’s western desert. According to an article in the Jerusalem Post, “… this allows the militias like Kata’ib Hezbollah to be the long arm of the IRGC and Quds Force commander Qassem Soleimani. Iran can use Iraq as a base to threaten Israel…”

Iran’s support for KH is a key pillar in its strategy of achieving regional hegemony. Just as Lebanon has come to be dominated by Hezbollah, Iran is seeking to dominate Iraq through militias like Kata’ib Hezbollah. Therefore, we can see how Iran is continuing to work to destabilize the Middle East while building platforms for a future war with Israel, not only in Lebanon and Syria, but also in Iraq.