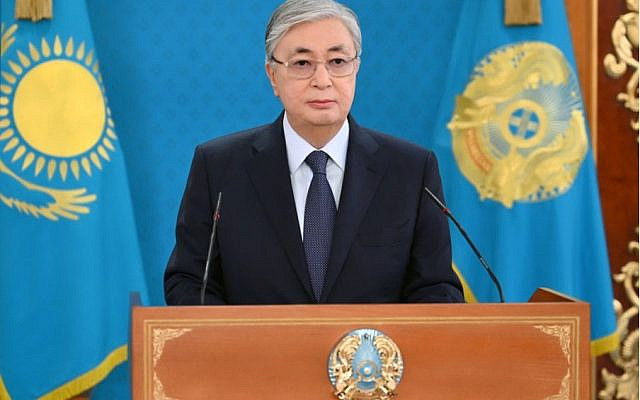 Source: office of the president of kazakhstan https://www.akorda.kz/en/president-kassym-jomart-tokayevs-address-to-the-people-of-kazakhstan-801221

In the early 1950’s Israel sought to implement the “periphery doctrine”, allying with secular Islamic countries such as Iran and Turkey to create common cause against Arab countries. Today the tables have turned and Iran and to a large extent Turkey, have become a cause for immediate concern. A large part of Israel’s National Security headache comes from Iran and its proxies and especially after the Abraham accords Iran has been the singular most and the only real threat in the neighbourhood for Israel. Whether it is the nuclear program or Hezbollah and Syria, Iran has tried to implant itself on the land borders with Israel which supplying weapons and training to the Hamas, a Sunni ally of a Shia regime.

Turkey, which for decades was a staunch Israeli ally, in the past decades of Erdogan’s rule, has worked consistently against Israel’s interests. It is becoming an increasing part of a threat to Israel’s security and well being, specially given its tacit involvement in several hotspots of Islamic terror, where Israel is the primary enemy and target. Pakistan has also started raising the anti-Israel and anti-semitic flag often in the past years, most recently during the Organisation of Islamic Countries extraordinary meeting in Islamabad, which were accompanied by large scale pro-Iran, anti-Israel protests in Lahore. While Pakistan has been too far to worry about for Israel’s security establishment, Turkey has not.  The fall of Kabul to the Taliban while has created some amount of discomfort and a lot of discussions in Israel, the interest has been more due to US withdrawal than due to a country being handed over to a terrorist group, which openly calls for Israel’s destruction and supports the Hamas. With the recent protests in Kazakhstan, like it or not, Israel has been now sucked into the “Great Game” of Asia.

Israel’s relationship with the five countries of central Asia, the five “stans”, has always been cordial and strong. This has always been a sore point for Iran, which has considered central Asia its cultural and ethnic backyard and Iran has always tried to upend Israel in Central Asia, including an assassination attempt on Israel’s ambassador to Baku a few years ago. Kazakshtan has been one of Israel’s stronger allies in the region and counts for 25% of Israel’s energy exports. The Kazakh regime has had strong defence and intelligence links with Israel, also given their secular status but muslim majority, creating concern of radicalisation and home grown terror.

With the attempted coup in Kazakhstan put down and President Tokayev back in control, there is a need to look at some aspects of the crisis that have implications across the region and beyond. What started as a popular protest became a show of force by external forces with links to Turkey and Pakistan. Amongst the groups reportedly active in the protests was the Pakistani Tablighi Jamaat. The Kazakh President himself had stated that terrorist groups from Afghanistan and the Middle East had been active in the attempted coup. The recently arrested head of the National Security Committee, Karim Masimov, was rumoured to have links with Muslim Brotherhood related organisations, including the Hizb-ut-Tahrir.

On the 10th of January, the BBC reported  Kazakhstan’s President Kassym-Jomart Tokayev as having described the deadly violence that occurred as an attempted coup d’etat. Tokayev told leaders of the CSTO that the action had been co-ordinated by a “single centre” but did not name those responsible. It is in this context that the role played by Turkish radicals and their links with extremists based in the Afghanistan-Pakistan region had now come under the microscope. On the 11 of January 2022, the Kazakh Envoy to Turkey almost said that Turkey was involved when he told reporters  that people experienced in “getting involved in hotspots” on the side of “radical Islamist groups” were among the attackers during recent riots in Kazakhstan. One wonders if he was pointing to the alleged involvement of Turkish trained Syrian fighters who had been involved on the side of Azerbaijan in the conflict with Armenia.

Kazakh security agencies had apparently traced inroads made by Turkish radicals from Turkey into the landlocked region. Internal probes are underway in Kazakhstan into the role of these radicals in the current crisis and their links with extremists from Afghanistan and Pakistan, several of whom seem to have played a role in the recent terror attacks. Notably, it has been estimated that some 20,000 “armed foreign fighters” attacked Almaty. These numbers originally attributed to President Tokayev were subsequently withdrawn, however, the presence of Islamic extremists in substantial numbers has been reported by some other sources as well.

While several allusions have been made to the participation of foreign fighters from abroad, the government in Kazakhstan has offered no proof to this effect. However, the organised nature of these protests indicates some degree of prior planning and collusion of radical Islamic groups present in Kazakhstan. Pakistan has been a close ally of Turkey in assisting it to promote the Turkic identity across Central Asia, through public communications and media houses, both Turkish and Pakistani, while Turkey has assisted Pakistan in its anti-India agenda and terrorism in Kashmir.

Initially, it seemed that the agenda of the protests had expanded from just the issue of increase in the prices of LPG to include other fundamental grievances and demands, related to economic livelihood and poverty.However, it soon became clear that these were more than just popular protests as dissidents systematically destroyed public property and killed security personnel. Russian intelligence, which was tasked to monitor the situation by President Vladimir Putin, initially concluded that the Tablighi Jamaat, (banned by Kazakhstan in 2013), backed by Pakistan was behind the riots. Russian intelligence did note some Tablighi Jamaat sleeper cells in Kazakhstan becoming active just before the riots. Turkey, a close ally of Pakistan, has been accused of supporting radical groups and organisations across West Asia, North Africa and in Turkey’s extended neighbourhood under Erdogan’s government in the recent past. Turkey’s infiltration of Central Asia began soon after the collapse of the Soviet Union. The objective was to expand the pan-Turkic footprint into Central Asia and Erdogan’s obsession with the revival of the Ottoman glory.

Just one example of this was the establishment of several Turkish schools and universities in Central Asia which played a significant role in  promoting the ideology of Pan-Turkism, and providing Islamic education (madrassas). The main aim was to infiltrate the top-level government positions in Central Asia and create a pro-Turkish leadership. One study shows that from 1991 to 1999, 29 schools were established in Kazakhstan, 18 in Uzbekistan, 13 in Turkmenistan, 12 in Kyrgyzstan and five in Tajikistan (a non-Turkic country).More than 16-thousand students attended these schools.

Knowing fully well that the current unrest in Kazakhstan has been put down effectively with Russian presence, Turkey’s President Recep Tayyip Erdogan could only express solidarity with Kazakhstan amidst the coup attempt against President Tokayev. As the term president of the Organisation of Turkic States, Erdogan held separate phone conversations with leaders of the member countries over the protests that swept Kazakhstan.Diplomatically, Turkey was at the other end, in the crisis, as the Kazakh President invited Russian special forces and Armenian soldiers under the CSTO to help put down the unrest. The failure of the coup was a clear blow to Erdogan’s prestige.

Little wonder then that Pro-Erdogan circles, claimed (quoting a former Russian Parliamentarian) that followers of Fethullah Gulen, a US-based cleric who is accused by Turkey of staging a coup attempt in 2016, might be those fomenting trouble in Kazakhstan. Ruslan Balbek, who is also a former deputy prime minister, told Russia’s state-run Ria Novosti that the “hands of ISIS and Gülenists are visible” in the protests, he said, using an alternate acronym for Daesh. One study noted that Salafist trend is present in the western areas of Kazakhstan,i.e., Atyrau, Mangistau, Aktyubinsk. It is in the second region that the current unrest began. Religious extremism arrived there from the Caucasus and with active propaganda of missionaries from the Arab states who came to work on oil development projects.

The Taliban victory in Afghanistan, and the export of Al-Qaeda and Daesh fighters to Central Asia since August 2021 has created a new situation for Russia and Central Asia Republics. This combined with Pakistan’s known habit of fishing in troubled waters leads to the conclusion that it provided support to Turkey in its efforts to unseat President Tokayev, who appeared to be moving towards Russia and away from Pakistan’s key ally China. In this game, the role of Turkish foreign fighters could well have been crucial. However, the Turkish game plan did not go as expected, as the Kazakh President requested help from Russia and requested military assistance.

For Israel, this should be a wake up call to look beyond its immediate borders. While Iran is today’s threat, Turkey and Pakistan are future threats to the Israel and its security, specially in the “peripheral” states. While Israel’s assistance to Afghan refugees in Tajikistan is a move in the right direction, there is a long road to travel to secure Israel’s future.