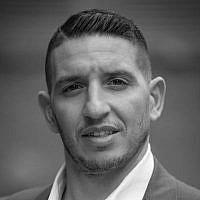 The Blogs
Maor Ben Hamu
Apply for a Blog
Advertisement
Please note that the posts on The Blogs are contributed by third parties. The opinions, facts and any media content in them are presented solely by the authors, and neither The Times of Israel nor its partners assume any responsibility for them. Please contact us in case of abuse. In case of abuse,
Report this post.

When examining types of antisemitic incidents during 2022, we saw several trends, one of which is of particular concern. 2022 saw a slight decline in the number of incidents compared to 2021, which was a peak year with over 2700 incidents. This was the highest number in over 40 years as documented by the ADL, likely attributable to the Israel-Hamas escalation in May/June 2021.

This decline should not obscure the challenge. The nature and severity of the threats to the Jewish community has not diminished. The number of antisemitic incidents continues to rise, and harassment and violence against Jews and Jewish institutions across the country are reported at an alarming rate. This poisonous atmosphere is augmented by miserable and deplorable statements by celebrities such as rapper Ye (formerly Kanye West) and antisemitic material distributed by NBA player Kyrie Irving – who both came under fire for it.

Antisemitic incidents originate from a few clear sources. Of the cases in which we can ascertain a distinct motivation, white supremacist ideologies and radical Islamism stand out as major influencing factors. An increase in the number of terrorist attacks across significant stretches of time periods are also linked to the emergence of extremist movements and terrorist organizations linked to white supremacy and radical Islamist terrorism.

As I mentioned, one identifiable trend is reemerging in recent incidents. There is a clear and disturbing target when these groups attack our communities. The trend which presents a complicated and dangerous threat to our communities is our houses of worship, Our Synagogues.

Chosen course of action, the professional term in the world of security and professional operational planning for the action in which the opponent chooses to attack after performing an analysis of the attractiveness of the attack and the availability and speed with which they can carry it out.

After a potential attacker concludes their assessment and preliminary information gathering, it will come to the bottom line of which course of action has the highest chance of success and the highest potential for damage that they can cause.

In just two short weeks in November, a few radical individuals with plans to attack Jewish communities in New Jersey and New York were arrested. The arrest was achieved through the cooperation of various law enforcement agencies and community officials who were able to intercept the threat in time and disseminate the information (“BOLO” alert) for the community’s preparedness and preventative actions. In New York City a potential tragedy was averted when the suspects were intercepted by police officers at Penn Station, given that online postings indicated an intent to carry out an assault at a Manhattan synagogue.

Synagogues are the most attractive target, with the vast majority of attacks (51%) carried out against Jewish houses of worship, followed by Jewish communal institutions (14%), Jewish individuals (13%), and educational institutions (10%). The most severe attacks in recent years have been carried out against Jewish synagogues and congregations, including the horrible massacre at the Tree of Life Synagogue in Pittsburgh in 2018, the shooting at Chabad of Poway in California in 2019, and the stabbing attacks in Monsey, New York, during the 2019 Hanukkah holiday.

One of the things that intensifies and increases the risk posed by the last two attempts to carry out attacks against synagogues is the advanced stage in the execution timeline for the attack and how imminent it was. Furthermore, the two suspects possessed a firearm, a high-capacity magazine, ammunition, an 8” long military style knife, a swastika arm patch, a ski mask and a bullet proof vest, among other things a fact that emphasizes the tangible nature of this possible assault.

An analysis of the two attempted attacks presents a worrisome picture that there are still many extremist elements with real and immediate terrorist intentions to target synagogues.

At this point, the desire and attractiveness for an attack on a synagogue in the eyes of the aggressor are clear and understandable to us. As someone who was present at the difficult scene at both the Tree of Life Synagogue in Pittsburgh and in Monsey, it’s hard to put into words how devastating the aftermath of an attack is as well as the short- and long-term effects from such an assault are on survivors.

There is a specific major question that we need to ask ourselves when we intend to deal with threats of this kind that hover over every Jewish community and institution wherever it is, And the question is, are we doing enough to provide the best security response we can for our community? Are we using all the resources and assets at our disposal to provide the best security package and coverage?

This question is certainly related to the entire security operation, the daily routines and activities of the community and the required preparations and adjustments before sensitive periods at higher risk, for example, the next Chanukah holiday and Purim in the near future.

Still, there is one resource that every community has at their disposal. It is available to every community, but its use in most cases needs to be informed and optimal. That resource is the human factor; those regular and dedicated community members with a deep affinity and connection to their community constitute a layer of security that needs to be guided and operated correctly and efficiently in order to be productive and considered as a strategic security solution for the operation.

The advantages of this layer of community members’ security is clear: they are uniquely familiar with community members and their families. They are also well versed in the structure in which activity takes place, the perimeter, and the environment in which it is located. In many cases, some have relevant professional training, such as being members of law enforcement agencies or first aid training as part of their service in medical first responders’ units. So, all that remains is to provide these members with basic professional training sessions in the field of security that will upgrade their skillset and position the security layer of the community members as professional, effective, and most of all, available and active in the routine activities and daily life of the community.

In the initial stage, community members will receive basic training sessions such as analyzing the outside perimeter layout of their operation in order to understand and select operational positions for staffing in routine and emergency situations. Training will emphasize the sensitivity and need to place extra assets and resources in the operation during high-profile periods such as Shabbat and Holidays. Additional guidance will be on emergency scenarios of any kind with special coaching on providing critical real time response for those scenarios.

Once we proceed towards advanced training programs, we should seek to provide more professional training such as Krav Maga and tactical firearms training in accordance with existing weapons licensing and laws with the goal of providing a higher-level of operative response to extreme assault scenarios.

In addition to the mentioned benefits of utilizing community members, this training will offer them security capabilities similar to those of trained security personnel and turn the security response they provide into a reliable, efficient, and professional security layer. This security layer will provide a great asset for any community security operation. Once a well guided training process is completed, the operation is able to implement and utilize this layer in its security protocol and various security circles and prepare a creative operational strategy built on the community’s most valuable and committed human capital.

In conclusion, the number of threats and their tangibility is constantly on the rise.
Our and the authorities’ abilities to detect and identify them in the early stages is not perfect. In order to deal with these threats, we are required to carry out frequent risk assessments and in particular to assess the quality of the response we provide against the threats. It is our duty to create different layers of security in order to provide the best security packages and strategies within the resources and means at our disposal.

The main conclusion that I am sure of is that if we are able to properly plan and manage the stages of training the security layer of the community members receives and their performances once going operational, then the desired result will be obtained – A community security operation which is a reliable, effective and professional with an extra unique layer available for their system year-round.

About the Author
Ben-Hamu has 20 years of global security experience: He began his career in the IDF, serving for three years on a special intelligence unit and attaining the rank of First Sgt. and team leader specializing in counterintelligence, human surveillance, and undercover operations. Following his army service, Ben-Hamu was recruited by the Shin Bet and was an air marshal for six years working with El Al, Israir and Arkia. During that time, he also managed regional operations for Holocaust delegations visiting Poland. In 2011, Ben-Hamu was chosen to partake in the prestigious and highly competitive training program for security directors of Israeli embassies and missions abroad; a joint endeavor of Israel’s Foreign Ministry and the Shin-Bet. In May 2020, Ban-Hamu completed the senior security director's training course, a joint program by Israel’s National Police and the Israel's National Security College
Related Topics
Related Posts
Maor Ben Hamu