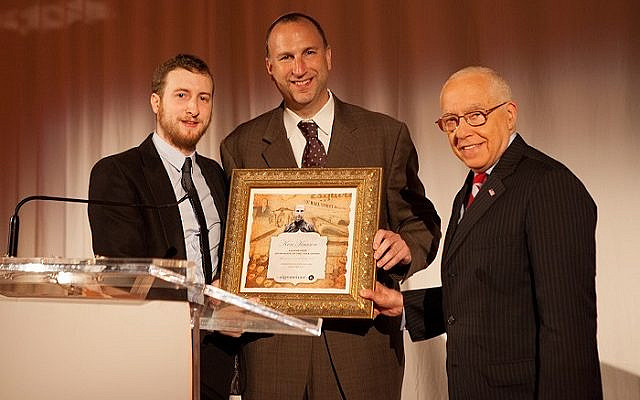 Ken Kurson being presented the Journalism of the Year award

Ken Kurson is known for his close relationship with Jared Kushner, the President’s son in law and senior adviser. Indeed, Kurson has worked at the epicenter of politics and media for decades, and has had a front-row seat to many different historic events. But it’s his passion about his Jewish faith and the state of Israel that is lesser known.

In the political world, Kurson served as the Deputy Director of Communications for Giuliani Partners, and co-authored Giuliani’s New York Times bestselling book “Leadership.” Kurson went on to serve as the Chief Operating Officer and Deputy Campaign Manager for Giuliani’s ultimately unsuccessful run for the presidency in 2008.

After a substantial stint in the world of politics, Kurson parlayed his skill-set to the world of journalism.  After founding Green Magazine, he became a contributing editor at Esquire, where his monthly “Green” section covered the realms of financial and investing news for readers.

With the world of media increasingly transitioning from print to digital platforms, Kurson has adapted accordingly by creating a series of digital news properties of his own. Book and Film Globe is a site that he established that functions as a cultural review website. The site publishes smart, funny commentary from the internet, and features movie reviews, film essays, criticism, book reviews and first-person literary essays.

Kurson also created Fine Art Globe, a site dedicated to reviewing the art world, and cracking open much of the mystique associated with an industry that continues to be the source of intellectual curiosity and intrigue for many. The transition from print to digital media has been one that many outlets have gone through with varying degrees of success.

HuffPost to its credit, was ahead of the curve in terms of mainstream media outlets that heralded the rise and emergence of digital media properties. But there’s little doubt that outlets within the Jewish media world have also taken the initiative and successfully adapted accordingly. The Times of Israel has certainly taken the initiative in this regard, and its success is self evident, as it  continues to grow as a trusted source of news for consumers regarding Israel and Jewish related events and issues.

Then there are of course Jewish media outlets that have transitioned from print to digital platforms in a relatively seamless way. The Forward is a great example of one such outlet. But there have undoubtedly been many others. Just this past week, our community learned that The Jewish Week, which was long considered must-read weekly news for Jewish residents of the tristate area, will be stopping its print edition altogether and transitioning to the web.

These changes are inevitable products of the continued changes in consumption habits among readers. In fact, The Algemeiner which has also been a part of this pattern among the Jewish media world, awarded Kurson the paper’s “Journalist of the Year” award at its third annual summer benefit in 2014.

Of course, Kurson also led The New York Observer through a similar transition, which proved remarkably successful. As the paper’s longtime editor in chief, Kurson oversaw the Observer’s decision to end its print edition and to ultimately remove “New York” from its title. During Mr. Kurson’s tenure, journalism thrived in the publication’s newsroom, and some of the most well-respected journalists of our time got their start under Kurson’s direction and tutelage at the paper. Indeed, there were also some prolific pieces of journalism and newsworthy stories that the paper broke under Kurson’s leadership. When the paper made its transition to a digital media platform it  heralded in tremendous success in terms of increasing and broadening its base of readership. There’s no doubt that Kurson played a central role in this all.