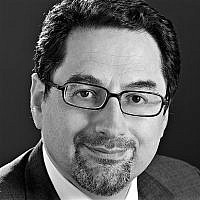 The Blogs
Adrian Cohen
Apply for a Blog
Please note that the posts on The Blogs are contributed by third parties. The opinions, facts and any media content in them are presented solely by the authors, and neither The Times of Israel nor its partners assume any responsibility for them. Please contact us in case of abuse. In case of abuse,
Report this post.

As widely reported Ken Livingstone escaped expulsion from the Labour Party ‎on Tuesday evening for his gratuitously incendiary and ahistorical comments on radio and television during Pesach last year that Hitler and the Nazis supported Zionism in the 1930s, comments he has continued to make during and after his disciplinary hearing. Needless to say he has shown no remorse.

Ken is the Houdini of anti-Semitism, no slur intended against the great escape artist. As long as anyone can remember Ken has been winding up and causing deep offence to the Jewish community, by which I mean almost all Jewish Londoners with the exception of those on the extreme left of the political spectrum.

His comments about Finegold, the Reuben brothers, defence of Al Qaradawi are well d‎ocumented.

On all these occasions he employed a simple strategy: deny he knew the targets were Jewish and then if that’s not enough launch an attack on an area of Jewish sensitivity, whether it was Mossad (Qaradawi), the war of independence (Feingold) or now in this latest round Zionism in the 1930s.

I speak with some authority on this subject because I worked with his troubled second Mayoral administration when many of these comments were made, although of course his history goes back decades before then.

He was offered the chance to make amends to active members of the Labour Party drawn from the mainstream community on at least two occasions: a dinner at Bevis Marks restaurant and a meeting at the LJCC.

In both he needlessly went on the attack. In the latter, in the midst of an election against Boris Johnson, he claimed Jews were too rich to vote Labour.

These widely publicised comments possibly cost him the election, given he lost on a 30,000 vote swing.

The Party was given a perhaps once in a political lifetime opportunity to take a much needed stand on anti-Semitism and expel Ken.

It found against him on charges of disrepute and yet failed to deliver.

The result is inexplicable and a blow to members of the party who genuinely care about the problem of anti-Semitism and Jewish support for the party.

Given that such polling as we have suggests Jewish support for the party is now in single figures this is a party with no traction with the community.

I would even go so far as to say the party is becoming a direct and present danger to the Jewish community. But does this mean Jewish members should resign?

There will be a fight back by our many friends in the party and we have to be part of that.

Resigning at this point in time neutralises us rather than empowers.

There may be a time to resign but we aren’t there yet.

About the Author
Amongst his many communal roles Adrian is a founder and co-lead of the London Jewish Forum and lay chair of Labour Friends of Israel. He is a trustee of the Jewish Leadership Council. He is deputy for Highgate Synagogue on the Board of Deputies of British Jews. He is also a trustee of Reprieve.
Related Topics
Related Posts
Comments