The Blogs
Dafei Tang
Apply for a Blog
Please note that the posts on The Blogs are contributed by third parties. The opinions, facts and any media content in them are presented solely by the authors, and neither The Times of Israel nor its partners assume any responsibility for them. Please contact us in case of abuse. In case of abuse,
Report this post.

26 is the gematria of YHVH, denoting mercy, by which the Children of Israel can be saved from all the curses.

The reason for the curse is clearly indicated in Due 28:58, as follows:

The gematria of this key verse is 6201, which is the Square Pyramidal Number of 26, meaning the sum of all the integers from 1 to 26 each squared, as follows:

This connects beautifully to the 676 words by which the “curses” are enunciated. In other word, if the curses are emanated from 26 squared, and cause of the curses are the sum of the integers from 1 to 26 each squared.

It is explicit from the verse that the root cause for the curses is that the children of Israel have failed to do:

The meaning of this phrase will be expounded presently.

Torah on the Stones

The fundamental question on “All the words of this Torah” is whether it is referring to the Written Torah or Oral Torah.

At the simple, literal level, this is the Written Torah, as the same exact phrase also appears in the beginning of this week’s Parashah, as follows:

According to Rashi, this is Torah written in 70 languages, which obviously means the Written Torah.

Torah in 70 languages is derived from the last word in the verse, הֵיטֵב, meaning: properly, as follows:

This comes to reveal that the failing of the Children of Israel is that they have neglected the Written Torah, at the simple level.

Astonishingly, 819 is exactly the Square Pyramidal Number of 13, meaning the sum of all the integers from 1 to 13 each squared, as follows:

The concept above can be illustrated by the pyramid as follows: 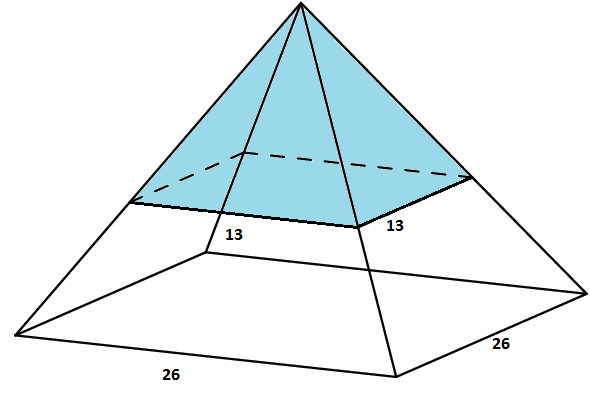 The geometry as a whole represents the square pyramidal number of 26, which is 6201.

The upper section represents the square pyramidal number of 13, which is 819, which is the sum of all the integers from 1 to 13 each squared, as follows:

The relationship can be summarized as follows:

The three stages represent the progression of Ein Sof in decent.

This would allude to Written Torah, as Torah on the stones in gematria is 819, as discussed above.

The second stage: Or Ein Sof (Infinite Light) אוֹר אֵין סוֹף in gematria is 414, and 13 times 414 is 5382. This would allude to Oral Torah as symbolized by Torah on heart, as will be further expounded below.

Torah on the Heart

Oral Torah is the feminine aspect of the Torah as a whole, which deals with the details necessary to fulfill the principles of the Written Torah.

Written Torah is static as the principle, and Oral Torah is dynamic as it deals with the situation at hand.

The key to write the Torah on heart is by the Spirit of the Living God, as it is written:

The “atbash” of the “Spirit of the Living God” in gematria is 853, which is exactly the mirror image of 358, the gematria of Mashiach מָּשִׁיחַ, as follows:

Oral Torah to Written Torah is feminine to masculine, and the Spirit of Living God represents the feminine aspect of Mashiach by which the Torah can be written on the heart.

“Write them upon the table of your heart” in atbash is 878 in gematria, which is exactly the gematria of Mashiach spelled out (מם שין יוד חית), as follows:

The root cause for the curses is that the Children of Israel have failed to know their Mashiach, which is the Living Torah in flesh.

Mashiach is called “and the Word was made flesh” in John 1:14, the concept is that the abstract Torah is fulfilled by the actions of man, i.e. the flesh. While this is the expectation of man at the individual level, at the collective level (Yechidah), this is the concept of Mashiach:

739 is exactly the gematria of “Living Torah becomes flesh” in “atbash”, as follows:

The concept of “clothes” is the expression of the essence that serves a dual role to reveal as much as to conceal the essence.

God at the level of Ein Sof is beyond human comprehension, this is the so-called “Surrounding Light” אוֹר סוֹבֵב in Kabbalah. The final two letters of “surrounding” can be fused into a Dalet, therefore rendering “Surrounding” as “Secret” סּוֹד, i.e. that which can’t be known by man.

God reveals Himself to His creation at the lower level through His “clothe”, this is the concept of “Infilling light” אוֹר מְמֻלָּא in Kabbalah. The first two letters of “infilling” can be fused into a Peh, therefore rendering “Infilling” as “Wonder” פֶלֶא, which is one of the names of Mashiach (Isaiah 9:5), i.e. by whom God can be known by man.

“YHVH clothed” in gematria is exactly 358, the gematria of Mashiach, as follows:

“From the Infilling Light” in gematria is also 358, the gematria of Mashiach, as follows:

The concept of YHVH clothed in majesty in gematria is 1216, which is the same gematria of “Living Torah becomes flesh” תּוֹרָה הַחַיִּים לְבָשָׂר, as follows:

Similarly, the following phrases in gematria are all 555:

It is now clear that the process of “clothing” is the same concept as “contraction”, i.e. tzimtzum.

“Clothed in Light” is the same gematria of Israel, which is 541, as follows:

In contrast, they who are clothed in darkness in gematria is 666, the number of the beast, as follows:

666 is also the gematria of “The Torah of Man”, i.e. that which taught by man, instead of that which is taught by Mashiach, as follows:

All the words of this Torah

1369 is 37 squared, where 37 is the gematria of Yechidah יְחִידָה, fittingly.

Astonishingly, the “small gematria”, i.e. removing the zeros, of this phrase is exactly the gematria of 37, as follows:

We can now understand the deeper meaning of this key phrase and the failing of which is the cause of all the curses, as follows:

Spirit of the Law is the antithesis of the Letter of Law, which is exactly what Mashiach has come to reveal and teach, therefore, the antidote to the cause of the curses are as follows:

There is another reason for the curses in this week’s Parashah:

At the simple level, the curses are due to not serving God with joy and gladness of heart.

At the deeper level, the lack of joy is due to not knowing Mashiach, for the knowledge of Mashiach brings about joy, and the four letters of Mashiach מָּשִׁיחַ can be permuted to spell יִשְׂמַח, meaning: he shall rejoice.

The phrase “with joy and gladness of heart” בְּשִׂמְחָה, וּבְטוּב לֵבָב in gematria is 414, which is exactly the gematria of Or Ein Sof, i.e. the Infinite Light, as discussed above, which is the cause of the curses.

This comes to teach that the reason Israel can’t rejoice in serving God is because they are entrapped in the Torah of Man, i.e. the traditions of man, instead of observing the Torah of Mashiach, as taught by the Holy Spirit, which is freedom. For where the Spirit of the Lord is, there is freedom (2 Cor 3:17).

2131 is exactly the gematria of the Bible, as follows:

About the Author
Insight into the weekly Torah study with a focus on gematria...
Related Topics
Related Posts
Comments