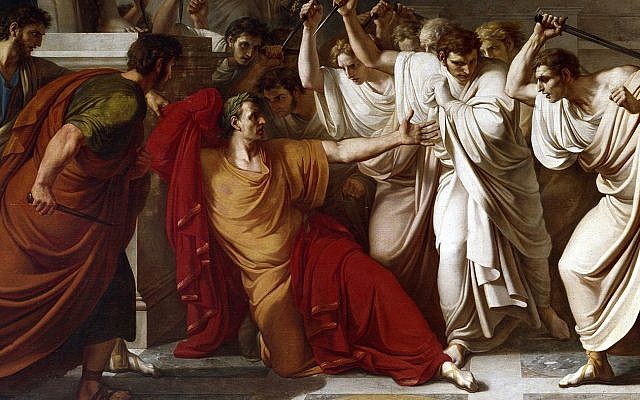 This quote by the great 18th Century British poet William Blake helps explain one of the most difficult aspects of this week’s parasha. The Torah shares with us a hard-to-understand metric of grudges the Jewish people should, or should not, have.

“An Ammonite or Moabite shall not enter the assembly of the Lord; even the tenth generation shall never enter the assembly of the Lord. Because they did not greet you with bread and water on the way, when you left Egypt, and because he [the people of Moab] hired Balaam the son of Beor from Pethor in Aram Naharaim against you, to curse you. But the Lord, your God, did not want to listen to Balaam. So, the Lord, your God, transformed the curse into a blessing for you, because the Lord, your God, loves you. You shall not ever seek out their welfare or their good, all your days.”

Inspiring us to be better people, the Torah usually warns us to stay away from grudges. We are famously warned against bearing a grudge. “You shall neither take revenge from nor bear a grudge” (Leviticus 19:18). Why is it that we are told here to hold a grudge against the people of Amon and Moab for something as simple as not being greeted by them with bread and water? Why must we, thousands of years later carry a sense of resentment for something as trivial as not receiving something as simple as some bread and water? The term “You shall not ever seek out their welfare or their good, all your days” takes the question to a whole new level. To never seek their good just because they failed to offer us bread and water? Is this why we must hold a grudge and withhold any help to them for eternity?

The harshness of the response becomes all the more difficult when looking at who we should not hold a grudge against. The Torah continues:

Centuries of slavery and attempted genocide on the part of the Egyptians in exchange for a warning not to despise Egyptians is anything but an overreaction. If there is anyone towards whom we should be forever resentful, it would be the Egyptians. Being warned not to hold a grudge against the Egyptians despite their cruel treatment of the Israelites while maintaining an eternal grudge to Amon and Moab for simply not greeting us with bread and water, is a discrepancy which begs to be settled.

“It seems to me that the verse distances these two brothers [i.e., Ammon and Moab, from the Kahal] because Abraham performed acts of kindness—gemilut chasadim— on their behalf, in that he saved their parents from captivity, and in Abraham’s merit they were sent from the destruction of Sodom. Thus, they were obligated themselves to act for Israel’s benefit, but instead, they acted wickedly. Specifically, the Moabites hired Balaam, and the Ammonites did not bring the Israelites food and water when they were close by…”

Fascinating. The failure of the Ammonites and Moabites to reciprocate the kindness Abraham showed to their forefather Lot, is what earns them eternal animosity from the Israelites. When betrayal comes from where we expect it least, it hurts most. As Julius Caesar famously exclaims in Shakespeare’s Julius Caesar:” Et tu, Brute? Recognizing his own friend and protégé Brutus, is among his assassins, hurts more than any other aspect of it.

In college, I had the pleasure of taking a class with renowned psychologist Norman Blumenthal. He once shared that during the Holocaust a relative of his (and his cousin, Senator Richard Blumenthal from Connecticut), was taken by the Gestapo. They rounded up all the men and their belongings, preparing them for their departure to the concentration camp, Dachau. The relative, Mr. Blumenthal, served honorably in the German army in WWI and had earned the equivalent of the Purple Heart Medal. Being asked to put all of his belongings in a designated pile, he approached a German soldier standing nearby holding his rare military medal expecting recognition. The soldier asked him for the medal, looked at it, and tossed it into the pile with the rest of the useless items. With a condescending tone, the soldier told him it is worthless, and he should get back in line with the rest of the people. Blumenthal went on to survive the horrors of the Holocaust. Reflecting on his experiences—the death camps, torture, near-death, humiliation, and more — the worst moment for him was the moment his purple heart was tossed away with the swing of a hand. Professor Blumenthal, a renowned trauma psychologist, went on to explain that it is when trauma comes from a place of trust and closeness that it hurts most. The story of Amon and Moab is the tale of betrayal out of closeness and kinship. Betrayal out of closeness is less forgivable than persecution surrounded by estrangement. “He who repays evil for good, evil will not depart from his house.”(Proverbs 17:13)

Nachmanides continues: “The Egyptians were distanced from us for three generations because of their wickedness as they have done to us many evils, but they were not forever despised as we were strangers in their land and we escaped to them in the days of famine [the days of Joseph] and [we are indebted to them] for the honor they did with our forefather [Joseph] and made him into a ruler and officer…”

In 2013, George Saunders delivered a commencement speech in the University of Syracuse, an address which could have been relegated to the forgotten memories of the many commencement speeches given at the conclusion of every academic year. Instead, the speech went viral and became one of the most remembered speeches in modern history. Among other things, Saunders said:

“What I regret most in my life are failures of kindness.

Those moments when another human being was there, in front of me, suffering, and I responded . . . sensibly. Reservedly. Mildly.

Or, to look at it from the other end of the telescope: Who, in your life, do you remember most fondly, with the most undeniable feelings of warmth?

Those who were kindest to you, I bet.”

It’s a little facile, maybe, and certainly hard to implement, but I’d say, as a goal in life, you could do worse than: Try to be kinder

The lesson of Parashat Ki Tetzeh is a lesson in kindness. We should never fail anyone, most definitely not those closest to us.