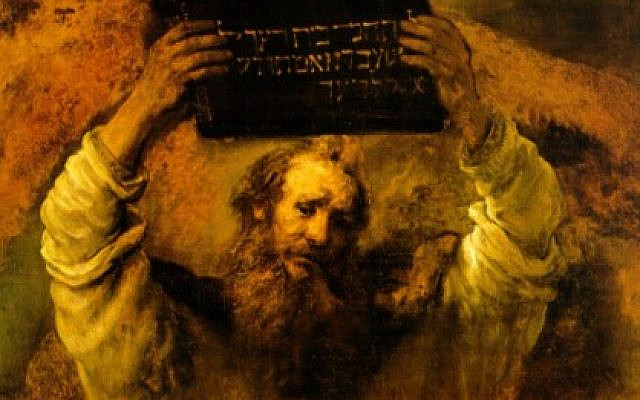 In this week’s parashah, we are confronted with the greatest sin ever committed by the Jewish people, the sin of the Golden Calf, in which the Jewish people create and worship a golden form in the middle of the camp, throwing off the authority of God and the law, and descending in what seems to be lawlessness and debauchery. In fact, this sin is so foundational that rabbinic statements associated any future sin with the spirit of that original sin, and that the annual fast day of Yom Kippur is not only about atonements for present sins, but also an annual atonement for that original sin.

Many wonder how a people who only 40 days earlier stood at the foot of Mount Sinai and heard the voice of God could so quickly spiritually descend and give into all their passions.  Behind this surprise lays the thought, “If I were there, I would never have done that!” But is that assumption true?

In 2015, Rolling Stones Magazine ran an article entitled Your Love is a Drug: 20 Great Narcotic Love Songs.  Honestly, most of these songs I did not know, so I guess I am helplessly stuck in the 80s, but one song stuck out to me, Robert Palmer’s 1985 hit Addicted to Love.  Anyone who grew up in the generation of MTV will remember Robert Palmer gyrating and droning suggestive lyrics, backed up by a ‘band’ of four identical brunettes clearly playing air guitar, all identically clad in very suggestive black dresses.  (This video was clearly not made in 2021.) Palmer sings

A one-track mind, you can’t be saved
Oblivion is all you crave
If there’s some left for you


You don’t mind if you do

Woah, you like to think that you’re immune to the stuff, oh yeah
It’s closer to the truth to say you can’t get enough
You know you’re gonna have to face it, you’re addicted to love

There are literally hundreds of songs which describe the intense love with the ecstasy associated with drug use.  Indeed, especially in the beginning of a relationship, a person can experience a ‘high’, and neuroscientists have noted that the hormones oxytocin and endorphins play a major role in romantic relationships.  In both love as well as hallucinogenic experiences, people experience a sense of unity, a merging of sorts of one with the other.   Palmer’s song is not only suggestive of erotic desire, but also reflective of someone experiencing chemical withdrawal, needing that heightened sense of unity with the other or the universe.  “Oblivion is what you crave.”

At this point, you might be asking, “What does this have to do with this week’s parashah?”  In recent decades neuroscientists have studied the brain activity of individuals engaged in religious ritual, including those engaged in devotional prayer, ecstatic rituals, and meditation.[1] While I am not intimately acquainted with the science, those in heightened religious states present similar neuroimages to those in love or in a drug induced state, with heightened levels of endorphins.  In other words, an individual in a religious state can experience a heightened sense of ecstasy.

The moment of Mount Sinai, the revelation of God in this world, was not simply an individual experience of a unique individual going up a mountain.  While Moses indeed was atop the mountain, the people below experienced thunder, lightning, shofar blasts, and the voice of God thundering through the darkness.  In one text the experience was so intense that the people seem to have some vision of God!  (Ex.24:10-11).  The event of Sinai not only was a unique moment in time in which the finite people encountered the infinite God, but this occurred on a mass level.  The experience was so intense that the people shuddered in terror and feared that if they continued to hear the voice of God they would die.  When a finite being or a finite people stand before the full glory of the Infinite, the very sense of what it means to be an individual in this world begins to dissolve, and one might experience floating down an oceanic river of eternity.  Like romantic love or a certain drug induced state, a person begins to feel they are merging into the other.  If there ever was a mass ecstatic and religious experience, it was the moment of revelation at Sinai.

Now consider you were there and participated in this peak ecstatic experience, an experience unlike any you have had or likely to have in the future.  What do you do the day after?  What do you feel?  Where is your guide, Moses? Why does he tarry?  The only thing you hear now is the wind of the wilderness.

For forty days the people sit at the foot of the mountain and wait, but wait for what?  Rabbi Adin Shteinsalz brings a striking image; he compares the day after revelation at Mount Sinai to a woman suffering from post-partum depression.  For nine months a woman’s hormones and body are mobilized for the creation of an incredible new life, culminating in the singular experience of childbirth. The previous vitality experienced by her is now gone, and this could lead to a deep emotional void.

In this respect, the sin of the Golden Calf was a normal phenomenon; it was the natural reaction to the giving of the Torah. This is what often happens when someone attains spiritual exaltation that is not built progressively, stage by stage, and then experiences a sharp descent, where everything suddenly disappears. Baalei teshuva [newly religious people] often experience this very problem. These individuals attain a certain level of exaltation that can often feel like a burning flame. When this flame inevitably goes out, the void that remains can be devastating.[2]

In other words, the people experienced a painful withdrawal, and without Moses to hold their hand, in desperation they turned to the Golden Calf in a disastrous attempt to reclaim the vitality they felt only forty days earlier.  In the rhythmic dancing, feasting and sexual licentiousness associated with the worship of the Golden Calf, they tried to recreate that same religious ‘high’ they so strongly desired.  It is particularly following these liminal, elevated states that people are particularly vulnerable to addictive behavior, seeking experiences -or substances- to feel alive.

In Jewish thought and specifically in chasidut there is a notion that everything created in this world can be elevated to a higher purpose, even those things which often might be seen as carnal- including eating, drinking, and sexuality.  Drinking wine on shabbat can be used to sanctify the day, dulling the physical senses, and yet opening up one’s heart to song and celebration.  At the same time, the effects of wine can also lead an individual to an intoxicated state of oblivion.  The Jewish people had not yet a full framework in which these peak experiences could be contextualized to serve a higher end.  Jewish ritual is meant to help us connect to the Divine, to truly have these peak experiences, but to then bring these experiences back into a life of purpose and value.

I think our age can understand the ancient Israelites more that we would wish. We live in an age that is psychologically challenging, even unhealthy.   In our media-saturated culture that promises the fulfillment of every desire, we risk the danger of engaging in a constant search for peak experiences.  As our senses become bombarded, those same senses can dull, leading us to seek something more extreme to fill that emptiness.  Like the Israelites, we cannot simply remain forty days waiting in a desert; the ennui is intolerable.  We need stimulation, we need heightened experiences!  The number of addictions in our age are endless, and in truth, they are to a great extent fueled by a need to merge in some way with the vitality that exists all around us. However, some paths to transcendence are healthy, while others lead to great evils.  To give an example, the same love that we spoke about that can create deep emotional and physical relationships with another, can also be abused in a quest for power, domination, and pleasure.  The religious ecstasy experienced by those at Sinai might not be very different than the revelry of worshipping the Golden Calf.  In truth, we love the mountaintops but have not figured out how to live in the valleys, and for this reason we are vulnerable.  We might grasp for the first thing in front of us, regardless of what it is.

If I were to make an argument for a traditional life, it would be the fact that our lives are regulated, as we learn to the best of our ability to control these addictions.  When we rise to the top of the mountaintop, we return not to a valley, but a world of productive value, of mitzvot.  A life defined by ultimate values provides the context for these peak experiences.  The singular moment of revelation was also the moment of the giving of the Torah; the ecstatic experience served a larger end.  The Torah provides us the tools do go up the mountain of transcendence, step by step, to become closer to the Source of Life and to a certain degree, experience the infinite in our finite life.