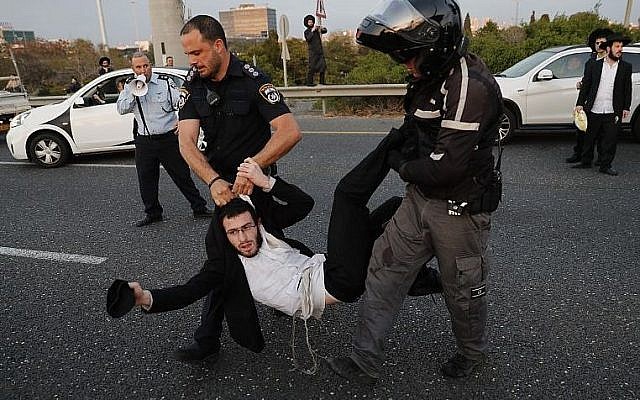 Police remove ultra-Orthodox demonstrators who are blocking a road during a protest against army conscription in the city of Bnei Brak, near Tel Aviv, on March 12, 2018. (AFP PHOTO / Ahmad GHARABLI)

The current shenanigans surrounding the proposed draft law, which threatens to topple Netanyahu’s coalition government have, unfortunately, little to do with principle but are primarily about personal and political self-interest.

That having been said, there can be no possible justification for a significant and growing proportion of Israel’s young to dodge the draft on the grounds that they are yeshivah students.

It was Reish Lakish who interpreted Numbers 19:14 to mean that “the words of the Torah can only endure when someone kills himself for it” (Shabbat 83b).

While soldiers are killed on the battlefield, some defenders of the current status quo argue that yeshivah students kill themselves in the tent of Torah!

Those of us, who have lost family members in Israel’s wars, find it difficult to accept the comparison.

Jewish law states categorically that everyone must play her/his part in the defense of the country – “even a groom must leave his chamber and a bride her wedding canopy” (Mishna Sotah 8:7).

In the entire history of our people from the Exodus from Egypt until the establishment of the State of Israel there is not a single example of where a percentage of the population was exempt from military service because they were studying Torah.

Those charedi political parties who insist that their segment of society not serve in the IDF are doing both Israel and their followers a disservice. No one wants to be a “freier” and it is only natural that those who give close to three years of their life to military service and then undertake reserve duty resent those who opt out on religious grounds.

Furthermore, the IDF is a melting pot, which helps many find their place in society. Friendships that develop during military service accompany us throughout our lives.

Those charedim who “separate themselves from the community” will always remain apart. They benefit from the fact that there are others who are prepared to defend our country while they themselves play no part in doing so. In that sense they are frequently referred to as parasites.

They may argue – and they do – that their prayers and study help defend Israel from its enemies. However, such a contention did not help those many pious Torah students who were murdered during the Holocaust. If there had been a Jewish State and an IDF back in the 1930’s, what happened could never have taken place.

Meantime, the proportion of charedim within Israel is on the rise. A report commissioned by the Israel Democracy Institute in 2016 showed that some 18% of the total population of children and youth (ages 0–19) are charedim.

When such a large percentage of Israel’s citizens fail to undertake military service while others are obliged to do so under law, it can only lead to resentment and to a fragmentation of our society.

Those politicians who care about Israel’s future should be working to change the status quo rather than being prepared to maintain it for the sake of political advantage.

About the Author
Made aliyah from the UK in 1985, am a former president of the Israel Council of Reform Rabbis and am currently rabbi of Kehilat Yonatan in Hod Hasharon, Israel.
Comments