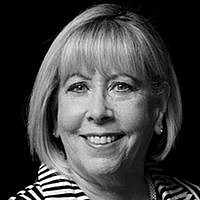 The Blogs
Rhoda Smolow
Apply for a Blog
Please note that the posts on The Blogs are contributed by third parties. The opinions, facts and any media content in them are presented solely by the authors, and neither The Times of Israel nor its partners assume any responsibility for them. Please contact us in case of abuse. In case of abuse,
Report this post.

The passing of Justice Ruth Bader Ginsburg last month was not only a loss to jurisprudence but to American life and culture. Great in influence, great in dissent, RBG did more than anyone to root women’s equality and emancipation in the Constitution. Her impact extended even into fashion and language—she made the lace collar a symbol of strength and “notorious” an adjective of respect.

And regardless of whether Justice Ginsburg’s judicial philosophy is shared by future Supreme Court justices or by other judges and lawyers, there is something every American can take from her legacy.

She was the embodiment of civility. Her friendship with Justice Antonin Scalia—her polar opposite in judicial philosophy—is legendary. But that kind of connection is now rare in America’s politics, in our social lives and, increasingly, within families.

I don’t know if there is more racism, more anti-Semitism, more hostility toward immigrants, more political polarization, more hate in general, than in the past. I do know it is more freely expressed today and that it threatens to undermine the foundation of our democracy and society.

The good news is that unlike health care, education or national defense, civility requires no party apparatus or federal funding. It just takes one person at a time.

Civility isn’t in what you say but how you say it. I’m not talking about being silent or politically correct, but about cultivating the art of disagreement without disrespect. Ensuring that everyone’s voice is heard is a positive value. We practice it on election day even if we don’t speak to anyone else. But we should also heed the election-day example in our daily lives.

Seeking common ground is how communities solve problems. We all need to listen and try to put aside pre-conceptions. How many times have we, for the sake of a friend or partner, gone beyond our comfort zone in seeing a film, or hearing new band, we thought we wouldn’t like? Sometimes we are pleasantly surprised, and sometimes we just affirm the importance of a relationship. We should be willing to take the same chance when it comes to listening to other opinions. The world is large enough for all the “I”s to make room for the “We.”

There are people all around us with different political, cultural and religious beliefs. We should be able to engage with them. Even if getting them to change their mind is rare, there is much good in getting them to respect our thoughts and vice versa, to understand, to learn and to respectfully argue.

There may be a rush that comes from hitting a political opponent with a sharp response—especially if it is based in policy or truth. But in the long run and the broad picture, incivility almost never brings a lasting positive result. We’re more likely to remember the times we were uncivil because regret stands out in memory like a blemish on the conscience. Our acts of kindness, in contrast, are ploughed back into our character and we often forget them. And that’s a good thing.

The civility I’m talking about, and that Justice Ginsburg practiced, is firmly rooted in Jewish tradition. Rabbi Hillel said, “That which is hateful to you, do not do to others.” The Talmud teaches that a person who embarrasses someone in public debases the Godliness within humanity and thereby sacrifices his or her own divine quality.

My mother taught me to “be a lady”—by which she meant to treat others the way I’d like to be treated, to choose respect not only with family and friends but also in public. So I wasn’t surprised when, among the many tributes to RBG, I came across this quote from her: “My mother told me to be a lady. For her, that meant be your own person, be independent.” Nowadays, one of the best ways we can exercise independence is to reject the culture of hate and incivility.

About the Author
Rhoda Smolow began her tenure as Hadassah National President on January 1, 2020. the organization’s 27th in its 107 years. She leads over 300,000 members, associates and supporters through the beginning of Hadassah’s second century as the world’s largest women’s Zionist organization. Smolow oversees Hadassah’s continued efforts and initiatives in support for Israel, anti-Semitism, public advocacy on women’s health, leadership training for women, and will continue to champion the groundbreaking, life-saving medical research and treatment at its two Jerusalem-based hospitals through the Hadassah Medical Organization
Related Topics
Related Posts
Comments