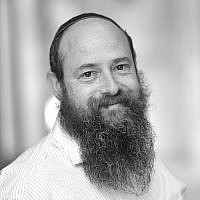 The Blogs
Meni Even-Israel
Apply for a Blog
Advertisement
Please note that the posts on The Blogs are contributed by third parties. The opinions, facts and any media content in them are presented solely by the authors, and neither The Times of Israel nor its partners assume any responsibility for them. Please contact us in case of abuse. In case of abuse,
Report this post.

Throughout my childhood, and well into my adulthood, my father, Rabbi Adin Even-Israel Steinsaltz, constantly reminded me of our family adage: “It is better to be a heretic (apikorus) than an ignoramus (am ha’aretz).” This guiding principle and core value was imparted to him by his own father in the hopes that he would question everything he encountered, remain fearless in his quest for knowledge, and ultimately find true security in his deeper understanding of Jewish spirituality, tradition, and law.

While on my own journey for meaning, I began to understand the import of these words. Faith, I realized, is ultimately faith-based, as we begin our spiritual lives woefully uninformed, relying solely on information passed down to us from previous generations. As time went on, I found that the only way to unlock the true wisdom and beauty of our Jewish heritage is to ask, argue and take nothing at face value.

But I also began to understand that it was crucial to ensure that everyone, regardless of their background or level of understanding, had these same opportunities to engage with the text and connect with the world of Jewish knowledge. It became clear that the very survival of our nation depended upon it.

Our history is replete with examples of Jewish communities that relentlessly “pursued the truth,” as well as those that blindly followed tradition. In every case, only the knowledge seekers flourished, grew and endured.

As the “People of the Book,” our longevity does not stem from our ability to pass down our core texts from generation to generation. There would be no meaning to our peoplehood if it merely entailed the passing of a baton. Rather, it is driven by our desire to debate, to dig deeper in our quest for knowledge. Stoked by the sparks of passionate discourse and deliberation, the flame of Jewish heritage and identity can burn in perpetuity.

What’s more, this same relentless pursuit for knowledge bridges our past, present and future. For generations, we have been engaged in the same discussion, and we will continue to be for generations to come. Again, the source of our vigor and fortitude is not just our texts but our ability to argue them.

As I see it, the study of Talmud is our lifeblood. Utilizing the chavruta system, a uniquely Jewish educational model whereby two people explore the texts together, we delve into numerous areas of study– from determining the correct time of day for the recitation of the Shema to deciding upon just compensation for damages inflicted upon private property to figuring out how many angels can fit on the head of a pin. We challenge each other to think outside the box, and in the process, we inform and strengthen our faith.

Even in our darkest times, the study of Talmud has been our light, giving us hope and empowering us to retain control of our minds, and in turn, our destinies.

It therefore troubles me that so many remain tethered to the notion that “Na’aseh V’nishma,” the action-centric declaration of a newly-forged nation, is still the ideal for Jewish living. Yes, we pronounced our loyalty to God, expressed our willingness to follow the Torah, and promised to be people of action. But after more than 3,000 years of following the rules, isn’t it time to understand why? Our pledge had two parts, yet we have been “doing” for so long that we have forgotten how to take the time to “listen” and understand the reasoning behind our actions.

In the hopes of creating new generations of knowledge seekers, my father penned original commentaries and translations for the entirety of the Jewish canon, including Tanakh (Torah, Prophets, and Writings), the Babylonian Talmud, the Mishna, the Mishneh Torah, and Tanya. He devoted his life to making sure that his children, and everyone else’s children, had the tools they needed to engage with the texts, study the foundations of faith in-depth, and join the identity-building discussion that has kept us alive through the millennia.

At Mount Sinai, we were all imbued with unique points of view, and it’s time that we wield them in pursuit of the truth. By challenging each other and supporting the development of tools that make the texts accessible to everyone, we will advance Jewish knowledge and ensure our survival. After all, only those who know can move forward, and only the seekers and keepers of knowledge will find true security in their deep understanding of Jewish spirituality, tradition, and law.

Rabbi Meni Even-Israel, is the Executive Director of the Steinsaltz Center, a unique pedagogical accelerator that develops tools and programming that encourages creative engagement with the texts and makes the world of Jewish knowledge accessible to all. On Sunday, June 10, a Gala Dinner at the Orient Hotel in Jerusalem will honor Rabbi Steinsaltz, an intellectual luminary and trailblazing educator, and mark the culmination of his life’s work.

About the Author
Rabbi Meni Even-Israel, is the Executive Director of the Steinsaltz Center, a unique pedagogical accelerator that develops tools and programming that encourages creative engagement with the texts and makes the world of Jewish knowledge accessible to all.
Comments