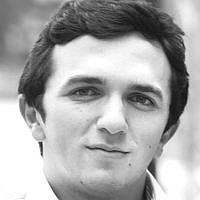 The Blogs
Josh Nass
Apply for a Blog
Please note that the posts on The Blogs are contributed by third parties. The opinions, facts and any media content in them are presented solely by the authors, and neither The Times of Israel nor its partners assume any responsibility for them. Please contact us in case of abuse. In case of abuse,
Report this post.

I spent most of the time during the COVID-19 pandemic (not to say that it’s not still going on), in NYC. While of course the government’s prioritization of citizens’ health was rightfully put first and foremost, the economic repercussions that so many small businesses suffered as a direct consequences of the closures was immense.

I know of countless restauranteurs and folks more generally working in the food business, who in some cases had to shut down their businesses completely. The food business to begin with, is a very difficult business to be in. Between the long hours; the incredibly high overhead; and the need to constantly satisfy customers, not to mention the government oversight and regulation, it  can be an incredible challenge to do well. When adding the Kosher element, and all the headaches baked into running a Kosher establishment, running a Kosher establishment becomes a very burdensome task.

Then of course, you take into account the closures that such establishments naturally make for holidays and Shabbat. The amount of money they lose in the process is immense. And now we come to the coronavirus pandemic. For years to come, there will be commentators and historians analyzing all of the missteps our lawmakers and government officials made in mitigating the damage that the pandemic wrought; including their inability to prevent it  from reaching our shores to begin with.

But the social distancing measures that were imposed led to lockdowns of many of these kosher restaurants; some of which had to shut down as a direct consequence. For some, the ability to merely provide food for their customers through delivery was not sufficient to cover their overhead and sustain their businesses. Now think of all the amazing hardworking folks that not only own these establishments, but also work there. They deserve our support.

Many of the kosher restaurants that are still open are still eagerly pursuing ways to get their balance sheets back to what they anticipated prior to the start of this pandemic. And then there are of course the more upscale restaurants like steakhouses who simply don’t deliver; and instead run their businesses based on entertaining their clientele within their facilities.

These businesses took a major hit during the pandemic. In speaking with the owners of some of these establishments, it seems that all they can count on at this point is communal support. Of course, we in the observant and traditional Jewish communities should always be seeking to patronize kosher establishments.

But in this post-coronavirus world, with all of the economic devastation that it  has wrought on kosher restaurants (and others of course), the least that members of the community can do is make an extra effort to order from these establishments. If we want kosher food options in our communities, we have to do our part to support them and keep them open. Let’s also in the process provide some much needed chizuk and support to so many of these restaurant owners and their staffs who need it  so badly. They deserve it . That much is for certain.

About the Author
Josh Nass is an award winning public relations executive and attorney specializing in crisis communications and reputation management. Nass has built a thriving practice that has grown to include a diverse portfolio of clients in a wide range of different industries. Among the fields Nass Strategies caters to are the healthcare, financial services, media and nonprofit sectors. Over the years the firm has represented the nation’s largest nursing home chains and their respective executives; a number of different venture capital firms and hedge funds in the financial sector, numerous high profile individuals; and several different media outlets. Clients have included The New York Observer, NYC based NGN Capital, the London Center for Policy Research, SW Management, Rainbow Apparel Company, Rockport Healthcare and many more. Nass Strategies has also been involved in providing media counsel to political campaigns both domestically and internationally. The firm has a staff fluent in Russian and Hebrew, and is active in working with clients based abroad. The firm also has a vast network of politically connected nonprofit clients. Those include but are in no way limited to American Friends of Likud, One Israel Fund and The International Association of Jewish Lawyers and Jurists. Nass got his start working in politics; having appeared dozens of times across Fox News, MSNBC and other cable networks by the time he had graduated college. In August of 2014, Nass ceased his on-air political punditry, marking his official foray into the public relations arena. Having already executed national media campaigns on behalf of numerous nonprofit and public advocacy groups as well as for several high profile individuals, Nass has quickly rose to prominence as a speaker and commentator on the subject. In addition to traditional media placement, Nass has been a sought after practitioner for crisis communications and reputation management issues. In June of 2014, Nass was placed on The Jewish Weekʼs 36 under 36 list. Josh prides himself on the unique and untraditional approach he brings to the execution of public relations campaigns. He graduated Magna Cum Laude from Brandeis University and holds a J.D. from Brooklyn Law School.
Related Topics
Related Posts
Comments