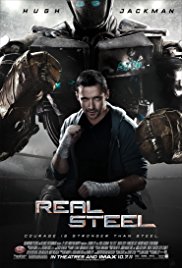 As part of the matriculation requirement for Israeli high school students, they have to do a project upon which their oral examination is based. Since my students enjoy cinema, I gave them the topic of “Influential Movies of the 20th and 21st Centuries.” One student selected the film Real Steel, which describes a future time when human boxing is outlawed as too dangerous and robot fights are substituted. I asked the student why the film was influential, and he responded that it was influential for him because the story of a boy and his father that is the subtext of Real Steel gave him an insight into his own relationship with his father and how it might be improved.

Charlie, a former boxer and now manager of a robot boxer, is an absentee father when Max’s mother dies. Instead of assuming responsibility for Max, he requests $100,000 in return for signing over custody to Max’s aunt. But there is a hitch. Max’s aunt and her husband have to go away for a month before they can take Max into their home, so they ask Charlie to take care of him until they return. The month turns into an unforgettable road trip for Max as he accompanies his father through the entrepreneurial world of robot boxing. Charlie buys used robots, repairs them, and then uses them in fights to win prize money. Sometimes his robots win, but most of the time they lose and eventually Charlie goes broke.

All seems lost until Max serendipitously finds a buried robot named Atom. They reboot Atom and set to work restoring its fighting functions. Although built as a machine to spar with other robots, Max and Charlie teach Atom how to take the offensive and fight against other mechanically superior machines.

Gradually Charlie and Max find unofficial fights for Atom. Max uses the winnings of matches to buy spare parts and fix Atom, and Charlie begins to pay off his old debts. Eventually, Atom’s prowess is recognized by professional promoters and he is offered prestigious matches in the Worldwide Robot Boxing Association. Soon the ultimate match is scheduled between Atom and Zeus, the undefeated champion of robot boxing. The bruising fight is the climax of the film, with the outcome unclear until the last moment.

The heart of Real Steel is not the robot gadgetry; rather it is the story of a dysfunctional relationship between a father and a son, and how that relationship is made whole again. Reconciliation begins when father and son stop finding fault with one another, when they begin to accept one another’s imperfections, and when they share a common goal. The shared goal of repairing Atom and preparing him for his fights unites father and son and rids them of old memory tapes of past indiscretions.

As a parent, it is natural to find fault with a child. I often want to correct my children, but I try to be guided by the Biblical model of how to give correction. I first ask myself if this is the right time and place. Can I criticize the behavior and not my child? Is my child ready to listen to me, or do I first need to build more trust so that my words will be accepted more readily?

The Bible tells us that criticism is good. We grow when we are able to listen to reproof and make midcourse corrections in the way we live. However, we have to be very careful when we criticize. The language in the Bible for this commandment is “you shall surely reprove.” Our Sages inform us that the Hebrew phrase for reprove is repeated to emphasize that reproof should only be given when someone is ready to listen. Simply criticizing goes nowhere. Charlie and Max finally understand this, which allows them to focus on the future and enrich their relationship. Real Steel does not just refer to robots. It refers to the strong bond between father and son that endures despite the mistakes that we make as fathers and sons.