Part of my job as principal of Yeshiva High School of Atlanta was to raise funds for the school. One fundraising effort was to sponsor an artsy event in the city; and in April of 1979 we chose to buy all the seats for a performance of Shakespeare’s Othello at the Alliance Theatre. Our goal was to sell them at premium prices to generate revenue for the school. Shakespearean tragedy was not an easy sell, but God was shining His face down upon us when we got the news that Richard Dreyfuss and Paul Winfield, well-known actors, would be the stars of the play. Tickets were gobbled up and people were sitting in the aisles. In fact, Richard Dreyfuss’s father and brother came and I gave up my seats so his family could enjoy Richard’s performance. The event reminded me that celebrity sells. People want to be where the famous are, and they are willing to pay a steep price to be close to the stars.

The desire to be close to celebrity is at the core of Hoax, a gut-wrenching narrative of moral turpitude based on the true story of Clifford Irving, an author who wrote a fictitious autobiography of Howard Hughes. Irving sees himself as a great writer, but he has had little financial success. One day he comes up with a scheme to write “the book of the century” about Howard Hughes, the eccentric millionaire who is known for his reclusive behavior. Irving, together w 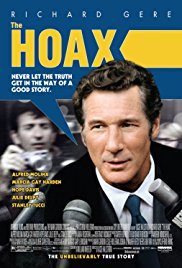 ith his devoted researcher Richard Suskind, assume that Hughes’ desire for privacy and to avoid legal action will trump all other concerns, and that Hughes will not go public to deny the veracity of the book. Thus, Irving’s hoax will be perpetrated with ease.

Things go as planned for a while because everyone is thirsty for details about Howard Hughes, the celebrity. When the possibility of actually meeting him presents itself, people cease questioning the truth of Irving’s narrative. All they think about is finally seeing the mystery millionaire. They believe the story even when critical pieces of evidence about its truth are missing.

Eventually, Irving’s charade is tested in the crucible of investigative journalism and Irving must invent lie after lie to perpetuate the ruse. Both his financial situation and his marriage unravel under the intense pressure of him having to prove the authenticity of his information about Howard Hughes. The Talmud aptly observes that telling one lie leads to more lies. The slippery slope inevitably leads to a fall from grace.

The Ethics of the Fathers, a classic of Jewish wisdom literature, contrasts the attributes of Abraham, the patriarch of the Jewish people, with Bilaam, one of the arch villains of the Bible. Abraham possesses a good eye, a humble spirit, and is content with little physical enjoyments. In contrast is Bilaam, who possesses an evil eye, a haughty spirit, and an acquisitive soul. The commentators explain that this refers to a person who is jealous of other’s success and who does not take joy in the achievements of others, who is arrogant, and who yearns for luxury and physical pleasure. Such is an apt description of Clifford Irving.

The Hoax is a morality play about the worship of celebrity and the pitfalls of duplicity. The Torah instructs us to do the right and good thing. This is a general command to be honest, to be concerned with the welfare of others, and to conduct oneself in a way that brings honor to you and to God. Lying, as a way of doing business in the contemporary world, may bring us some short time gains, but, from the aspect of eternity, it is a road to perdition.