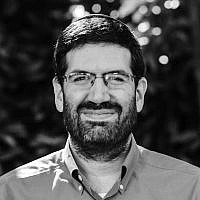 The Blogs
Geoffrey Claussen
Apply for a Blog
Advertisement
Please note that the posts on The Blogs are contributed by third parties. The opinions, facts and any media content in them are presented solely by the authors, and neither The Times of Israel nor its partners assume any responsibility for them. Please contact us in case of abuse. In case of abuse,
Report this post. 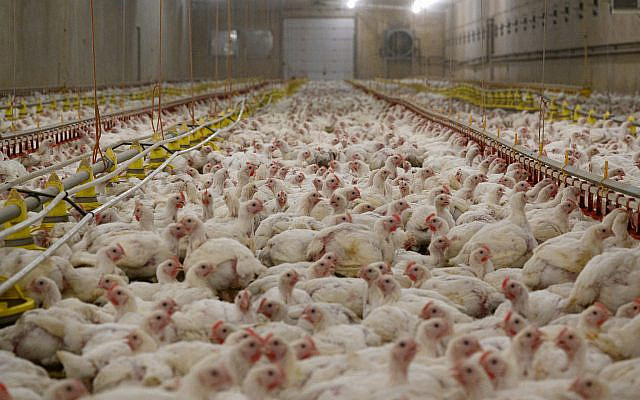 A recent video published by the New York Times introduced thousands of people to the astonishing cruelty that takes place every day on factory farms around the world. Focusing on the chicken industry in the United States, the Times brought viewers inside a typical industrial chicken farm, where chickens are raised covered in waste, without access to sunlight, and surrounded by dead or dying birds.

The footage shows how chickens are bred so that their muscles and fat tissue grow faster than their bones, providing maximum meat and maximum profits for the industry, but inflicting unbelievable pain on chickens throughout their short lives.

The animal agriculture industry, of course, seeks to hide these realities from consumers. The industry continues to push for “ag-gag” laws that prohibit filming abuses in animal agriculture. Factory-farmed animal products, meanwhile, are marketed with claims that animals have been “humanely raised” and imagery suggesting that they have lived their lives in healthy and peaceful environments. As the Times video pointed out, the term “all-natural” is widely used to hide conditions that are anything but natural.

Those who hold these beliefs are wrong.

Nearly all kosher-certified animal products on the market today come from animals raised in the same industrial conditions as those raised for non-kosher products.

Kosher-certified chickens, for example, are raised in the same horrific conditions that non-kosher chickens are, and are bred so that they suffer in the very same ways.

The many Jews who purchase kosher-certified meat because they trust that certification requires the humane treatment of animals are misinformed. At present, when we purchase kosher animal products in the United States, we nearly always support factory farming.

But increasing numbers of Jews are insisting that kosher should not be synonymous with factory farming.

I am one of more than 250 Jewish leaders who recently pledged to build a more just and compassionate food system as part of a Jewish Initiative for Animals campaign. In our pledge, “we acknowledge the gulf that exists between our ethics and expectations of a kosher certification, and with a collective voice affirm that kosher should not be synonymous with factory farming.”

As the Times video pointed out, contemporary industrial animal agriculture not only causes immense suffering to animals, but also exploits farmers. As another video in the series pointed out, industrial agriculture is also a major contributor to climate change, air and water contamination, and the destruction of wildlife habitats.

Is this kosher? We think not.

Just as claims that products are “all-natural” hides conditions that are anything but natural, the language of “kosher” hides a situation that is anything but kosher.

It is time for Jewish communities to ensure that kosher-certified food products actually reflect our values—and to limit our consumption of food produced in conditions of significant suffering and exploitation.

Fourteen years ago, the rabbinical organization to which I belong, the Rabbinical Assembly, established the Hekhsher Tzedek Commission, seeking to assure consumers that kosher food products would be produced in keeping with the highest possible ethical values and ideals. But not a single product was certified as meeting the initiative’s standards.

Today, many Jewish leaders concerned about these issues are taking a different approach. We realize that we cannot give our imprimatur to an animal agriculture industry that causes such harm to the environment, to workers, and to animals themselves.

Many of us are asking for institutions to reduce animal product consumption, to serve plant-based meals by default, and to refuse to purchase factory farmed products.

When those who are selling factory-farmed animal products insist that they are “natural,” “humane,” or “kosher,” we have learned not to be misled by such language. We will not look away when confronted with the realities of contemporary animal agriculture. We will work for food systems that are good for the environment, good for workers, and good for animals—food systems that we can truly describe as “kosher.”

About the Author
Geoffrey Claussen is author of Modern Musar: Contested Virtues in Jewish Thought (Jewish Publication Society, 2022). He serves as Associate Professor of Religious Studies, Lori and Eric Sklut Scholar in Jewish Studies and Chair of the Department of Religious Studies at Elon University.
Related Topics
Related Posts
Comments