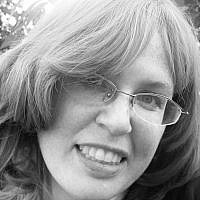 In addition to the mitzvah of fasting on the day of Yom Kippur, there is a mitzvah to eat on Erev [the eve of] Yom Kippur, and a festive meal called seduas hamafsekes is eaten in the late afternoon. A traditional menu for that meal consists of chicken — not too spicy so that one would not become thirsty later — and accompaniments. Chicken soup typically precedes the main course. Instead of matzoh balls or noods, the soup accompaniement for this occasion is kreplach — a type of wonton. Part of the reason for this custom is the similarity of name of the food: kreplach has the same letters as Kippur.

It is a bit of a patchken to make from scratch because you have to make a dough and roll it out, so if you are short on time, you can buy it ready or in frozen form. But homemade is usally best. Here’s the recipe I make. 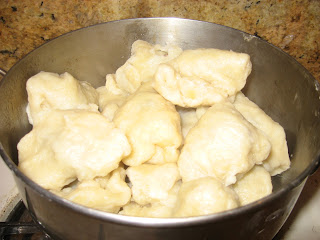 Mix all the dough ingredients together. I do this in a Kitchen-Aid with the dough hook. Mix until the dought is smooth. Form a ball that you roll out as flat as you can. Cut out circles with a glass of the size you want to use.

Assemble the kreplach by placing one spoonful of the meat filling in the center of each circle and folding it over. Seal the edges. Bring a pot of salted water to boild. Drop in the kreplach. They are done when they float up to the top, which takes 4-5 minutes of cooking. Remove and place them into soup a short while before you’re ready to serve it.