Arriving in the UK Tuesday afternoon, the first thing that hit my eye were the newspaper headlines on many of the major media outlets, including the Times and the Daily Mail – each of which appeal to substantially different sectors of the British population – publishing on their front pages the comments made by Chief Rabbi Efraim Mirvis on the issue of anti-Semitism, the Labour Party (and specifically its leader Jeremy Corbyn) and the forthcoming British elections.

Rabbi Mirvis left no one in doubt that he sees the recent growth in anti semitic sentiment and actions in the UK, as being connected (albeit not exclusively) with the behavior of the Labour Party, and especially the lack of leadership shown by Jeremy Corbyn in even beginning to deal with this major problem, Corbyn’s statement to the effect that he, personally, didn’t have an anti semitic bone in his body and that he had fought racism all his life, were completely irrelevant given his support and backing for a variety of political causes which, in turn, have spewed anti-semitic discourse.

Mirvis did not go as far to categorically say that members of the Jewish community should not vote for the Labour Party at the forthcoming elections, but he did suggest that they, along with other concerned members of the British public, should examine their conscience and, at the very least, ask themselves how a person who has miserably failed to deal with such an important issue, would be able to deal with the many other social, economic and welfare problems facing UK society in what appears to be a rapidly approaching post-Brexit era.

Britain’s office of Chief Rabbi is a venerable and respected office. Since its inception in the mid nineteenth century, there have only been seven incumbents, most of them remaining in office for two decades and more. While it is, first and foremost, an ecclesiastical position, the personality of the Chief Rabbi has always been seen as representing the wider Jewish community on social and educational issues of the day. Each Chief Rabbi, in turn, has preferred to avoid divisive political issues facing the country, excepting those rare instances where major events, facing the community as a whole across its internal sectionalism and splits, have become central to the public debate.

Chief Rabbi Dr. Joseph Hertz, who was in the office for over thirty years, including both World wars, the issuing of the Balfour Declaration, and the Holocaust period, was not known to mince his words where and when necessary. His successor, Chief Rabbi Israel Brodie, represented the Jewish community to the British government at the time of the establishment of the State of Israel, while his successor Rabbi Lord Jakobovitz became a spokesman at the time of the Six Day war in 1967 – also becoming associated (some would say too closely) with the social and economic policies of the Thatcher government. Lord Jonathan Sacks became, and remains to this day, one of the world’s leading religious philosophers and theologians and he, too, has used his position in the House of Lords for a number of eloquent interventions on the rise and evils of the new anti-semitism. Rabbi Mirvis has now added his voice over the growth of anti semitic sentiment and has laid the blame, as have many other prominent politicians even of his own party, at the door of Jeremy Corbyn and the Labour Party – that same party which for many generations was the natural home of the Jewish community due to its concern for immigrant groups, ethnic and religious minorities, the poor and the under privileged.

There can be no doubt that Rabbi Mirvis did not issue his statement without much thought and anguish. He must have given his statement much attention over a long period of time. It was published, quite coincidentally, on the same day as Corbyn was set to publicise his own party manifesto on issues of racism, resulting in even greater publicity, but yet again without an adequate response. All of the news shows and interviews on TV, the blogs on social media, and the radio programmes that day, dealt with the Mirvis statement, while almost all other major religious leaders throughout the UK, most notably Britain’s leading theologian, the Archbishop of Canterbury, came out with strong support for the stance taken by Rabbi Mirvis. They all expressed their concern that in the year 2019, so many members of the Jewish community should feel so insecure about their status within the UK.

Nonetheless, it provided the detractors with their obvious responses, ranging from an accusation that it was part of an underhand Conservative Party campaign to delegitimize the Labour Party just three weeks before the elections, along with the insinuation that should Labour lose the election (as indeed the most recent polls would indicate) it will be the blame of the Jewish community. The fact that, while the issue of anti-semitism has become a major talking point in the UK, the vast majority of the British public will decide who to vote for based on their understanding of who will provide the necessary economic, social and health policies and that few, if any, people beyond the Jewish community itself will vote according to their views on anti-Semitism, is of little relevance to those who would pour oil on the already burning flames.

Truth be told, the British Jewish community is an active and proactive community. It has succeeded beyond all imagination in the past hundred years and has, in turn, contributed disproportionately to the development and welfare of Britain as a whole. Ninety percent of its cup is indeed full, but one cannot ignore the very real sense of disquiet and even threat felt by many members of the community in recent years, and it is this feeling of disquiet which Rabbi Mirvis has, rightly, decided to highlight to a wider public.

Rabbi Mirvis is nothing if not a diplomat. During his term of office to date, he has sought to quieten internal community disputes and differences, and – when necessary – has come across as an eloquent representative of the community to the British public and political leaders. He has, as is to be expected, remained faithful to his own orthodox religious and Zionist principles, without attempting to push them down the throat of other groups and denominations that perceive their Judaism otherwise, be it of the ultra orthodox Haredi community on the right, to the Reform and Liberal communities on the left. It must run in the genes, as his father was a well respected Rabbi in South Africa (where Mirvis grew up), while his son is an equally popular and respected Rabbi in Melbourne, Australia. And while he believes that it is not for every Rabbi of every community to become involved and to make utterances over the political issues of the days, as the representative of the entire community he has clearly felt that the current situation in the UK is one where a clear and loud voice needs to be heard.

Unlike many of their Israeli counterparts, British (and other Diaspora) Rabbis are loath to get involved in wider political issues. That Mirvis has decided to take such a step, and the fact that he was able to bring on almost all the other major religious leaders throughout the UK in his support, is a clear indication of just how serious the situation has become. Britain’s Jewish community will indeed feel less secure should Jeremy Corbyn come to power, and the fact that he has failed to show any true leadership in dealing with these issues beyond oft repeated banalities and mantras, raises serious questions concerning his leadership qualifications to become Prime Minister.

It does not necessarily ease the dilemma of many Jewish members of society who believe in the socialism of a Labour Party and find themselves unable to vote for a party which champions laissez faire economics and Brexit. Whether they will stay at home or vote for the Liberal democrats remains to be seen – after all they don’t have any major impact on the bigger outcome of the election. But disquietened they are, and it has taken rabbi Mirvis to make them search their inner soul in an attempt to find the correct thing to do on December 12th.

Back to the archives and, as always happens when one is looking through historical material, a letter catches my eye. It is dated 1948, and it is a letter form the then (relatively new) Chief Rabbi, Israel Brodie, summoning the entire community rabbinate ( as indeed did Mirvis the night after the publication of his statement this week) to a meeting to discuss the alarming growth of anti-semitism in the country at the time – the period shortly after the establishment of the State of Israel and the end of the British Mandate of Palestine. 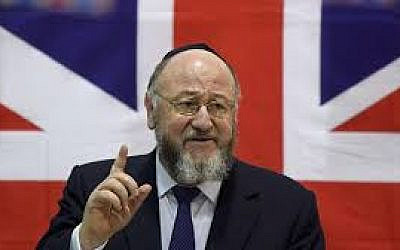 .Perhaps we, the generation that grew up in the 60’s and 70’s, were just fortunate not to have these issues on the table. We all felt quite comfortable with being Jews, often visibly so, in the schools, universities and public spaces of a society which was proud of its middle of the road social democracy. Brodie, Sacks and Mirvis, in their important office of Chief Rabbi, have reflected the fact that in the longer term, there will always be groups – be they the fascists on the right, or the Marxists and part of the intellectual left – who will seek to rekindle the flames of the world’s oldest hatred.

Kudos to Rabbi Mirvis for calling a spade a spade.

About the Author
David Newman is professor of Geopolitics in the Department of Politics and Government at Ben-Gurion University of the Negev. BIO: David Newman holds the University Research Chair of Geopolitics at Ben-Gurion University, where he founded the Department of Politics and Government, and the Centre for the Study of European Politics and Society (CSEPS) , and served as Dean of the Faculty of Humanities and Social Sciences from 2010-2016. Professor Newman received the OBE in 2013 for his work in promoting scientific cooperation between Israel and the UK. From 1999-2014 he was chief editor of the International Journal of Geopolitics. David Newman moved to Israel from the UK in 1982. In 2017 he was selected as one of the 100 most influential immigrants to Israel from the UK. His work in Geopolitics focuses on the changing functions and roles of borders, and territorial and border issues in Israel / Palestine. For many years Newman was involved in Track II dialogues between Israelis and Palestinians.He has additional research interests in Anglo Jewish history, and is a self declared farbrent Tottenham Yid.
Comments