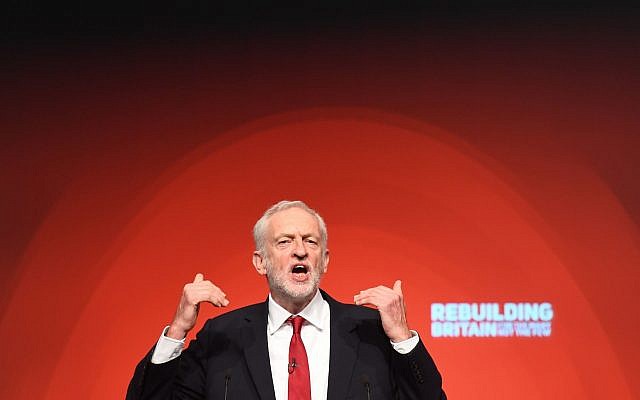 In a healthy liberal democracy, antisemitism is recognised as one of the most sinister and destructive forms of racism, confined to the darkest corner of the political spectrum, fiercely shunned by mainstream politicians and uniformly condemned. Because history teaches us that whenever antisemitism flourishes, freedom dies.

Antisemitism is a complex kind of racism because it accuses Jews not just of being inferior but also of possessing immense power and wealth, there is usually a conspiracy and some kind of malign or evil intent to subvert the greater good. It has been harnessed by forces as diverse as the Roman empire, the Catholic Church and the Nazis, but the outcome is always the same.

It is deeply tragic, but liberal democracy in Britain has been eroded by the antisemitism that has been allowed to thrive in the Labour party. This extraordinary and inspirational political movement for progress and reform has sunk into the ideological gutter and become a powerful magnet for the world’s longest hatred.

Labour has reached this nadir thanks to its leader Jeremy Corbyn, a devotee of antisemitic ideas for decades, who has spent his career praising antisemites, holocaust deniers and extremists whose organising principle is the killing of Jews for political gain. His election provided an opportunity for proponents of left-wing antisemitism, many of whom had been exiled from the party for years, to move in and take up senior positions in Labour.

During this election campaign the Labour party have tried to deal with their antisemitism crisis with a simple narrative that there are a small number of offenders who they were slow to deal with but are now getting on top of it. This is parroted by Labour supporters who then downplay the problem. But it isn’t true.

The issue runs much deeper. The first is Jeremy Corbyn’s own record. The company he has sought out in the service of his radical politics and the things he has said. (for a full list its worth reading this excellent article by Sarah Gibbs

When he became leader Jeremy Corbyn had a choice. He could have explained his past in the context of his political journey and even expressed some regret to reassure the Jewish community. He did no such thing. Instead he lied and obfuscated about what he has said and done.

The second issue is the Labour party’s inability and unwillingness to deal with the large number of antisemitic incidents taking place. The Equality and Human Rights Commission has been handed evidence of a complaints process that lacked the basic requirements of due process. To this day there are large numbers of activists whose disciplinary cases have yet to be heard.

The third and most damning issue is the extent of the cover up. Former Labour insiders have provided detailed evidence of the Labour leader’s office interfering in cases, ensuring lenient treatment for clear cases of antisemitism and ordering officials to lie about what was taking place.

Many people have fixated on Jeremy Corbyn’s refusal to apologise to the Jewish community in his BBC interview with Andrew Neil. This is consistent with his total lack of compassion for how much the Jewish community has suffered and how badly high profile Jewish former Labour MPs like Luciana Berger and Louise Ellman have been treated. But there was a far more sinister moment in that interview when Corbyn was asked if it was antisemitic to say: “Rothschild’s Zionists run Israel and world Governments” after some weird bluster he eventually said ‘that can be constructed as being an antisemitic statement and should not be used’ but he had to be pushed a few times. In his debate with Boris Johnson last week Corbyn made a strange reference to the suffering of Jews in 19th Century Germany.

Both examples are revealing. Despite Corbyn’s professed status as a committed anti-racist he appears to know very little about the nature and impact of antisemitism and the holocaust. Given the events of the last four years it is astonishing that he hasn’t swotted up and learnt some key phrases that would give him credibility when talking about it. That he hasn’t bothered, speaks volumes about his own views and his ability to recognise antisemitism when it is staring him in the face.

But far from being shunned, Jeremy Corbyn is celebrated. The latest polls show that more than a third of British people will vote for his party. On Friday morning, he could become Prime Minister.

For British Jews like me, this is terrifying. A Corbyn Government would transform the UK into a global hub for antisemitism and extremism. Very quickly our country would become a deeply hostile environment for Jewish people. They wouldn’t necessarily need to do much to make this happen. Their Government’s very existence would enable a culture of hate. What they have done to the Labour party and its institutions they would do to British life.

But the real pain comes not just from the perpetrators, but the apathy and lack of empathy from the bystanders, from the great British public who we felt we knew and who accepted and cherished us as valued members of British society. There are some incredible, brave people who have stood up to confront this antisemitism, but sadly their numbers are small.

Throughout Jewish history, perpetrators of antisemitism have relied on bystanders to do nothing or collaborate. On the rare occasions when our neighbours stood with us and opposed attempts to harm us, antisemitism’s destructive force was blunted. But the reality is, if you walk on by and decide that antisemitism is a price worth paying for some kind of greater good, to fix the NHS or defeat Brexit, then I’m afraid you are in very bad company on the wrong side of history.