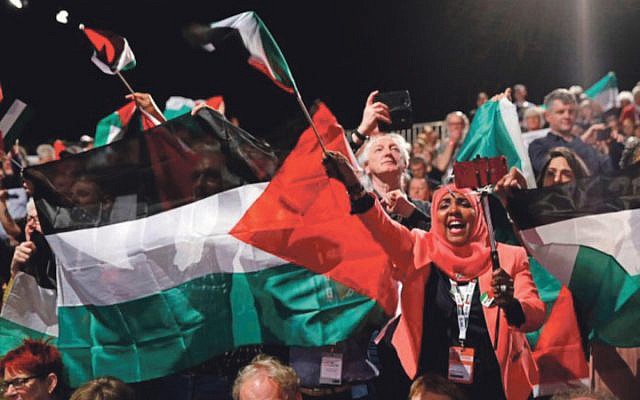 Palestine flags are waved during the Labour conference 2019 (Jewish News)

There has understandably been a lot of coverage of antisemitism and extreme anti-Israel discourse going on around the Labour Party Annual Conference in Brighton this week.

There was certainly a lot to talk about: a fringe meeting featuring high-profile people expelled from Labour for antisemitism claiming it was all made up to stop them talking about Israel; another fringe meeting featuring a skype message from boycott movement leader Omar Barghouti, a man who thinks Israel shouldn’t exist and was denied a visa to enter the UK by the Home Office; posters of cartoons showing Netanyahu flying an aircraft labelled “the lobby” firing missiles labelled “defamation” at Corbyn; newspapers being handed to delegates calling Israel a “racist endeavour” in direct contravention of the IHRA definition of antisemitism; the ubiquitous wearing of Palestine Solidarity Campaign (PSC) lanyards, endorsing an organisation that supports boycotts and is ambiguous about the Two State Solution.

Less has been said about the hard politics of what was actually voted on in the conference hall and what that tells us a Corbyn led Government might do.

Spoiler alert: This isn’t good news for supporters of Israel.

The 250 words of the motion that was passed are carefully calibrated not to appear extreme. They never mention the word boycott. But they subtly give the green light to a number of very problematic concepts, and take Labour another step towards the overt anti-Israel stance of Jeremy Corbyn.

It claims: “Recent actions by US and Israeli administrations are destroying prospects for peace in Palestine” – a dog whistle message that two states is no longer a viable proposition.

It says that “Labour … has a special responsibility to redress the ongoing injustices against the Palestinian people … because of the role Britain played as a colonial power”, implying that a Labour Government will take an interventionist role.

The narrative it presents about Israel’s creation is wholly one-sided and negative, highlighting only Palestinian suffering and implying Israel was created through ethnic cleansing “during the 1948 Nakba when Palestinians were forcibly displaced from their homes”.

The Conference committed to oppose any peace deal “not based on international law and UN resolutions recognising … [Palestinian] rights to … return to their homes.” Making “right of return” for all Palestinians to pre-1967 Israel a condition means that you are not really interested in two states for two peoples as it implies both states would have an Arab majority, and is an impossible demand that Israel could never sign up to without committing national suicide.

The position on an arms embargo is actually more nuanced than that passed last year: “stopping any arms trade with Israel that is used in violation of the human rights of Palestinians”; but the new step is to include wording that would allow Labour to put a targeted boycott of settlement produce into its manifesto: “To adhere to an ethical policy on all UK’s trade with Israel, in particular by applying international law on settlements”.

This was debated in the midst of a tumultuous fight over Brexit. No one got the chance to speak against the motion, six speeches were made in favour. One of them got a standing ovation for saying she (not a Jew) had never experienced antisemitism in the Labour Party. Palestinian flags were waved, as in 2018, creating the feel of a rally for one side, not a genuine debate about how to resolve a conflict.

You might ask how did this get chosen as the priority for debate? Why is it that two years in a row, when delegates hardly choose any foreign policy subjects to debate, they have had a pretty repetitive debate about Palestine? It was dressed up as “Ethical Foreign Policy” on the ballot paper in the priority ballot that picks topics to debate, so that people probably assumed it was wider before voting for it. And the reality is that the political factions inside the Labour party advise delegates who align with their faction who to vote for, so the Jeremy Corbyn supporting factions must have instructed their delegates to vote for it for it to have got through because they  have the majority of delegates from constituencies.

The one silver lining is that policy passed at conference does not automatically make it into the Labour General Election Manifesto; it has to be agreed by senior party figures amongst whom there are surprisingly still some moderates. Whatever happens next, make no mistake, Labour conference this week adopted a set of policies that would severely damage Britain-Israel relations. If they were implemented in Government they would erode the booming bilateral trade relationship and weaken the vital defence and security ties that keep British and Israeli people safe.