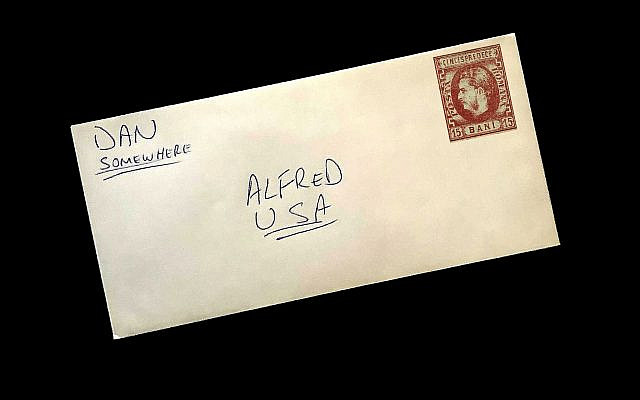 Does anyone still write letters?

I used to, in lieu of a diary, which seemed uncool. When I had something to say, I would choose one of my dozen or so great friends and put inkjet to paper. I made efforts to compose with care, as for an article in today’s Times of Israel.

I would print two copies, not thinking about the planet or the trees. One was folded and placed inside an “envelope,” which was affixed with “stamps” and sent by “airmail” to its unsuspecting destination. The other was furtively added to a binder.

Over time, around the mid-1990s, airmail was replaced by email, so just one printout was required.

Because of the nature of emails I also began to send them to more than one person. With hindsight, I know now that this shift was the beginning of the scourge — the innocent-seeming harbinger of a letter-destroying, society-distorting and soul-crushing storm.

I noticed the multiple-addressee policy sometimes caused offence which yielded snarky and even hostile replies. I see the long-gone upside now: people wanted their own letters! That seems rather quaint today, when some would rather stick needles in their eyes than have to read beyond a Tweet.

The binders still exist, though the pre-laser printer ink is fading. They form a record of my memories: the different societies I lived in as a foreign correspondent, the birth of my first daughter and the amazing thoughts and feelings that begat, little philosophies and grand designs. I consult these documents still, sometimes; late at night, when no one sees.

The letters peter out to a ignoble, whimpering end. There is something sad about the last of the letters. I know exactly which it is. But I can hardly bear to think of it, as of a loved one who has left this mortal coil (it was not at all Shakespearian; I just like the #$@^ phrase).

That dates to around the time my second daughter was born, almost two decades ago. It is no fault of hers, poor thing. The thoughts and feelings she generated were every bit as profound. But the idea of sending a letter about it just got too damn bizarre.

I loved those letters though. I loved writing them and even more so receiving replies, from those who bothered, until reciprocity died out as well.

The world is a paradox, here in 2020. For the first time in history, it may literally be the best of times and the worst of times. Few bother to do so but one must focus on the glass half full (as Dickens would; or would he?).

Still I’m troubled by the whole thing. So I sat down to figure out what’s going on. Here’s what I came up with:

Wait! Does writing these pieces qualify as being of a piece? I think it might; in fact I definitely think it does.

Might the whole thing net positive? Could this be a terrible thing that is needed to beget a good and necessary thing, like the smartphone or the IRS? I don’t rule this out.

Where does this situation leave the love letter? I honestly do not know.

Arcade Fire, one of the few contemporary acts that might be remembered beyond our lifetimes, put it this way in their masterpiece of an “album” The Suburbs: